But we’re about to find out which is best.

This is the tournament to determine which Christmas movie is the best ever. Check out the bracket, and make your round one picks below! 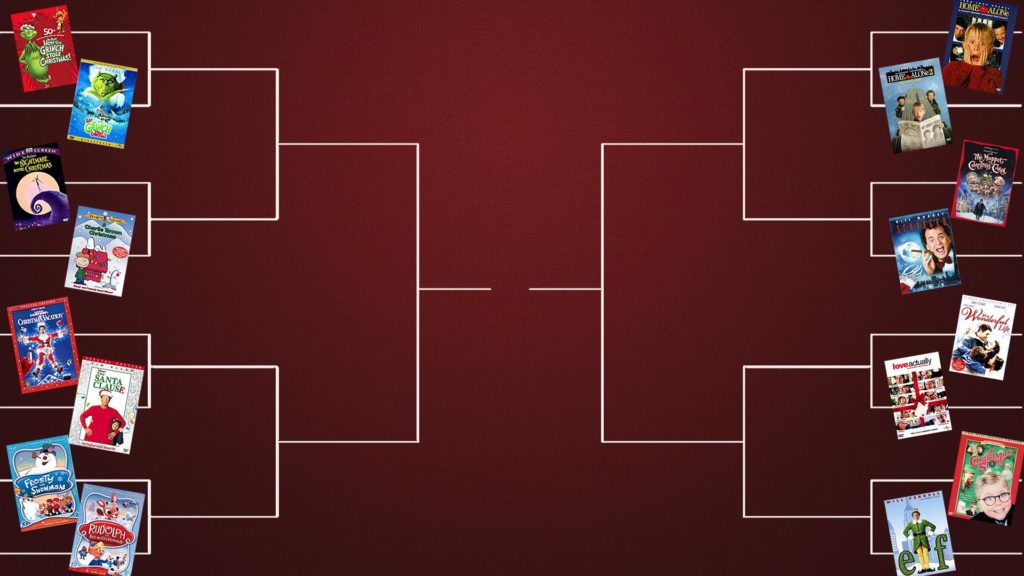 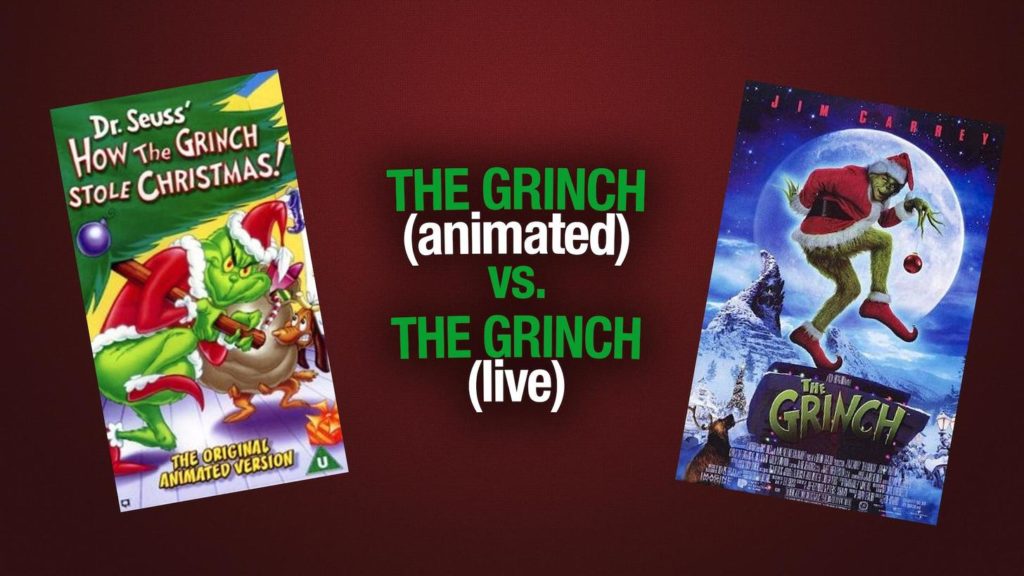 How the Grinch Stole Christmas (animated) – It’s the classic! This year is the 50th anniversary of the 1966 animated special on CBS. The voice of Boris Karloff is unmistakable and unmatchable. For a half-hour special from the 60s, the original is still beloved – when it airs on TV even in the 21st century, it sometimes wins the time slot among viewers (who were born after it aired).

How the Grinch Stole Christmas (live action) – Like all classics, sometimes an updated adaptation is due! This version from 2000 has one of the best directors alive – Ron Howard – and one of the greatest comedians alive – Jim Carrey. And while the kinda dark imagery may feel like a departure from the 1957 book and 1966 TV special, there is something pretty cool about seeing a real life Whoville occupied by non-animated Whos.

VOTE: The Greatest Christmas Movie of All Time

The Nightmare Before Christmas vs. A Charlie Brown Christmas 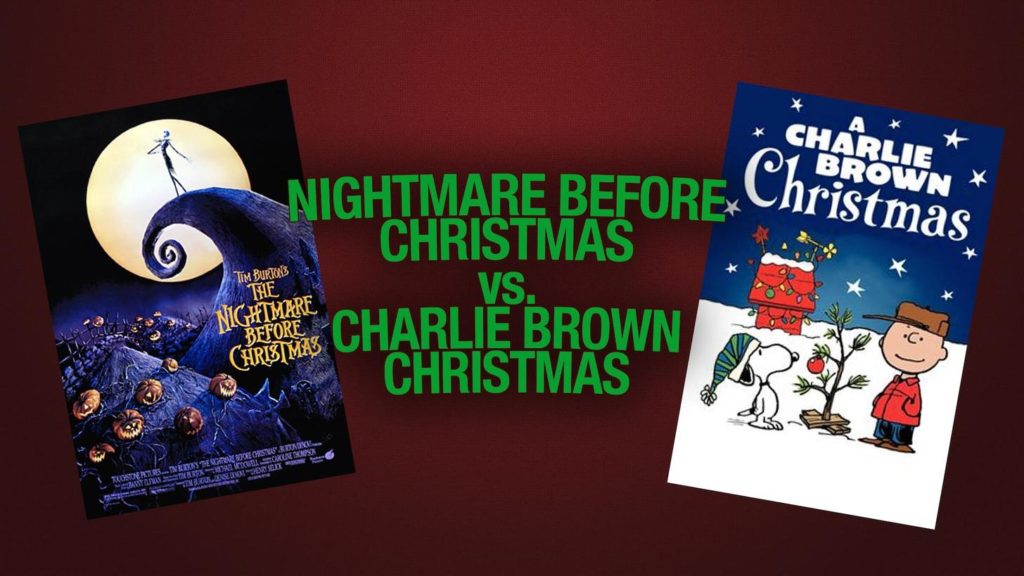 The Nightmare Before Christmas – It’s impressive that this movie works. It takes place in a town where it’s always Halloween, but is all about Christmas. It’s spooky and dark and creepy, but charming and at times heart-warming. And anyone who has ever been to The Haunted Mansion at Disney World or Disneyland can appreciate the film’s influence on Disney.

A Charlie Brown Christmas – The 1965 TV special is about as tonally different from Nightmare Before Christmas as two Christmas movies could possibly be. Vince Guaraldi’s music is now a staple of the holidays. Charlie Brown Christmas blazed a few trails. It’s the first time children provided the voices for animated characters. It spoke about the true meaning of Christmas, even invoking Scripture passages. And just try to go Christmas tree shopping without thinking about Charlie’s poor little tree.

VOTE: The Greatest Christmas Movie of All Time (2)

Christmas Vacation vs. The Santa Clause 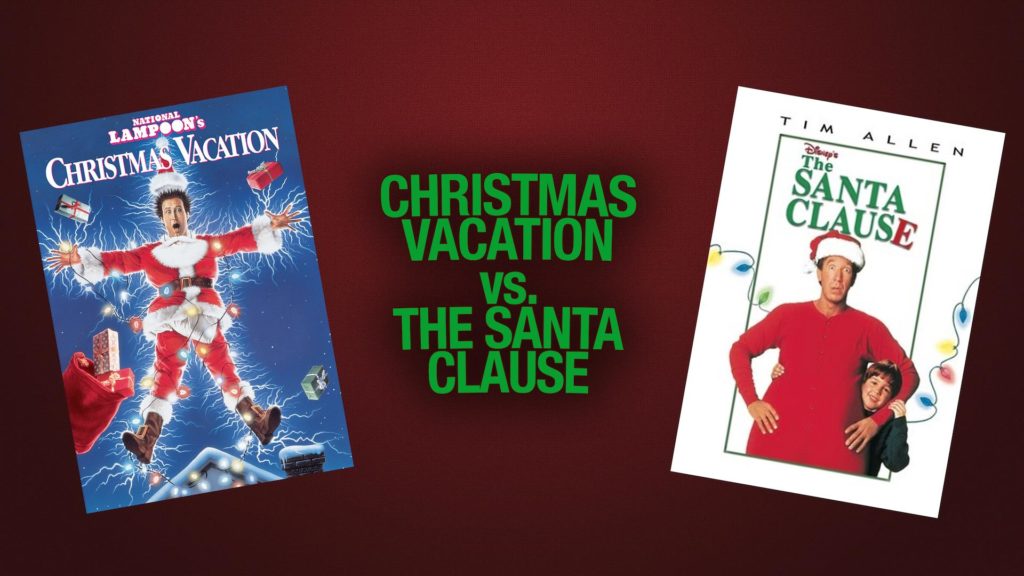 Christmas Vacation – Isn’t it rare for the third film in a franchise to be the most beloved (and highest-grossing at the box office)? Unlike the first two Vacation movies, Christmas Vacation takes place with the Griswolds’ at home. And there’s still plenty of humor even without a road trip story. Chevy Chase (and Clark Griswold) are at their best here.

The Santa Clause – The premise is either insane or genius – a dad accidentally disables Santa Claus and has to take over his duties because he’s legally obligated to do so by a clause in a contract Santa carries around. Yes, it’s a movie based on a pun. And it works! Only Disney could pull off a movie that has a SWAT team of elves and child custody hearing scenes.

VOTE: The Greatest Christmas Movie of All Time (3)

Frosty the Snowman vs. Rudolph the Red-Nosed Reindeer 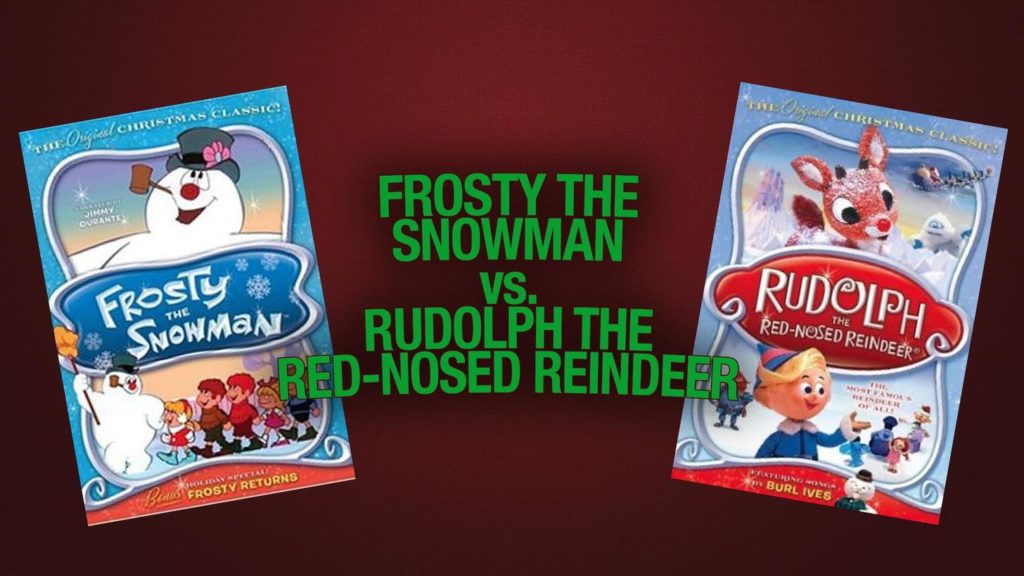 Frosty the Snowman – One of the classics. This 1969 special has a bunch of kids keeping their magically-animated snowman friend safe from melting. Since its creation, the special has run on CBS every year; it’s not really the holiday season until Frosty is on the air. Bonus: because this isn’t exclusively a Christmas movie, you can watch it through all of winter!

Rudolph the Red-Nosed Reindeer – These two movies get lumped together because they’re both from the 60s. But Rudolph came out five years earlier, features different animation (clay figures in stop-motion), and is more than twice as long. Because of that longer run-time, this special introduces us to a whole host of iconic holiday characters Rudolph meets along his journey.

FYI… the Frosty and Rudolph songs were both around before the specials, so don’t let the songs influence your vote too much.

VOTE: The Greatest Christmas Movie of All Time (4) 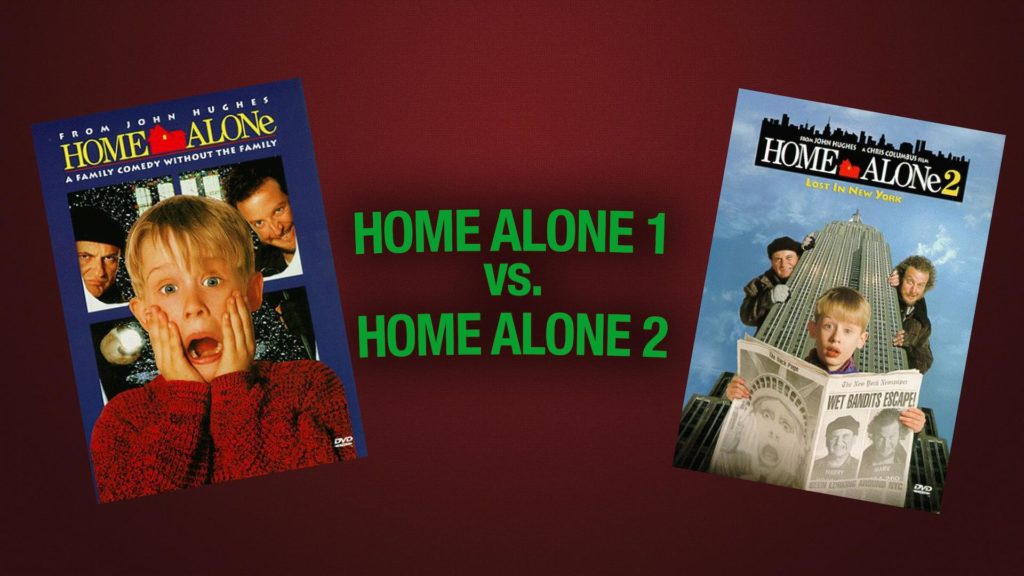 Home Alone – How iconic is Home Alone? Consider this: the 1990 release of Home Alone set the record for the highest-grossing live-action comedy film in history. That record stood for more than two decades; it was broken by the second Hangover movie. I may be overusing the term “classic” in this tournament, but for a lot of people of my generation – and likely others – Home Alone and the holiday season are inextricably linked.

Home Alone 2: Lost in New York – Some of the best elements of the first movie return in this sequel (almost to a fault). Suspend your disbelief a bit, though, and it’s totally plausible that the same kid could be abandoned by his family two years in a row, and at the same time that the crooks who nearly killed him were also in New York City. Whatever. Tim Curry is a legend, the bird lady makes me laugh, and there’s a cameo from America’s 45th President. Is that enough to make the sequel overtake the original?

VOTE: The Greatest Christmas Movie of All Time (5)

The Muppet Christmas Carol vs. Scrooged 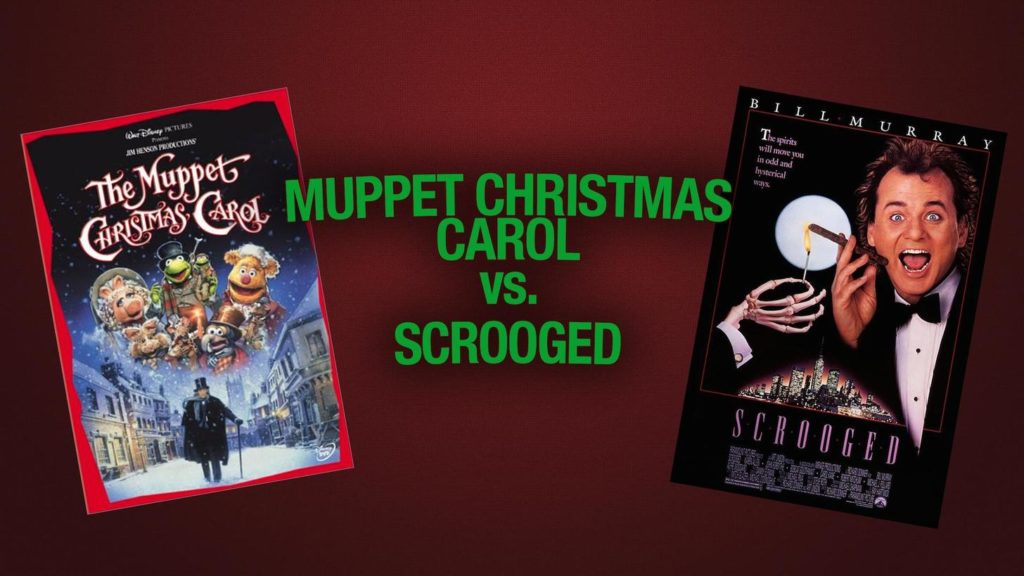 The Muppet Christmas Carol – The first Muppets project after Jim Henson’s death, this Christmas movie is loaded with charm and spirit. I mean, Michael Freakin’ Caine sings with the Muppets! If you’re going to make a Dickens play for kids, there may be no one more affable to portray the characters than the Muppets.

Scrooged – …although Bill Murray may give the Muppets a run for their money. He has the gift of innate likability and the skill to make pretty much every situation seem fun. Scrooged is a more modern take on the Dickens classic, and Bill Murray’s Scrooge is a bit more cynical and mean-spirited than Michael Caine’s. But if you like a bit of dark humor in a Christmas movie or you’re one of the people who think Bill Murray can do no wrong (hi, Dad!), Scrooged is for you.

VOTE: The Greatest Christmas Movie of All Time (6) 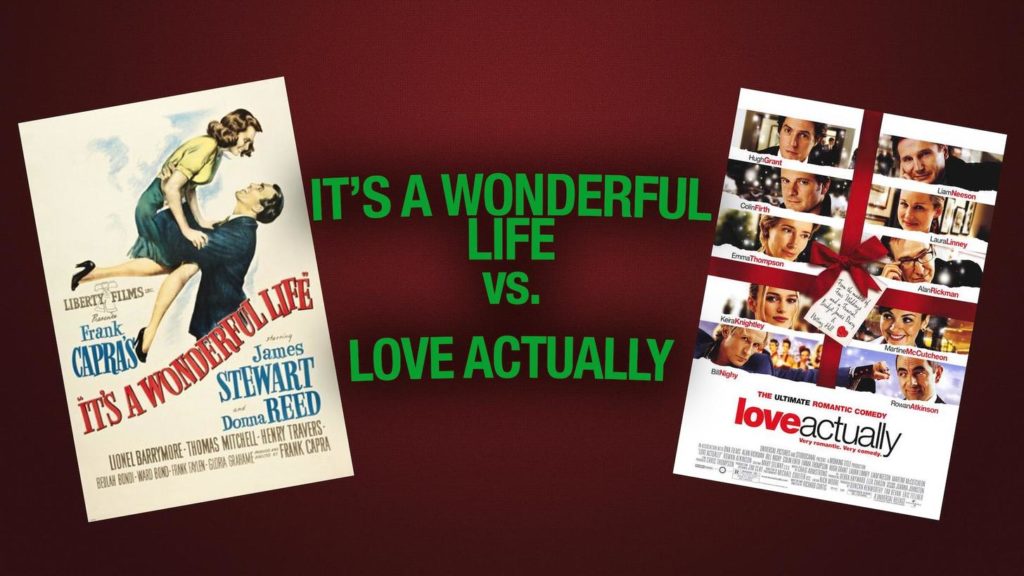 It’s a Wonderful Life – It’s been 70 years since this Oscar-nominated movie came out, and its influence over Christmas movies – and film in general – absolutely cannot be denied. It has been spun-off, adapted, unauthorized-sequel-ed, parodied, and endlessly referenced in other media. Angels getting their wings when you ring a bell? That was this movie. Lassoing the moon? That was this movie. And if you voted for Home Alone 1 up above, you might remember that the McCallisters even watched It’s a Wonderful Life when they were in France.

Love Actually – You could say that this movie has a pretty intricate plot connecting its characters. But really, all those characters are just there so that beautiful and talented actors can appear in a movie that will shamelessly and gleefully pull at your heart strings. Its sound track is crafted to heave the maximum emotional strength possible in a Christmas movie. And regardless of whether or not you agree with certain characters’ motivations (This guy’s story apparently wants me to root for marital infidelity?!), you have to admit the movie is effective at making you feel Christmas-y.

VOTE: The Greatest Christmas Movie of All Time (7)

A Christmas Story vs. Elf 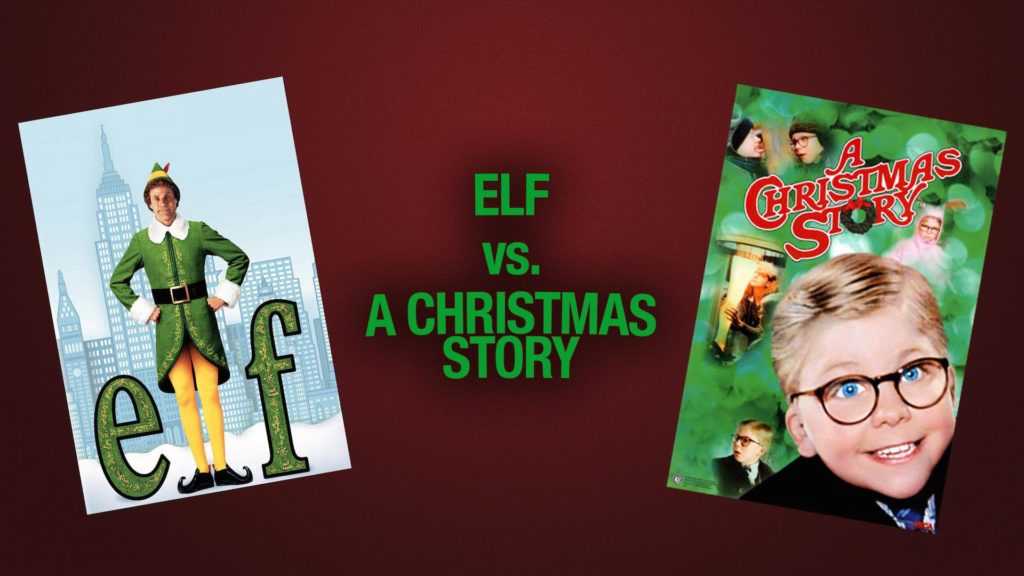 Elf – The fact that Elf may be the most quotable Will Ferrell movie says a lot. The fact that it came out 13 years ago makes me feel old. The fact that Ferrell turned down $29 million to do a sequel is surprising, but probably a good thing. Elf is nearly perfect as it is; a sequel could only mar its legacy. It is frequently listed as one of the best Christmas movies of all time, and it could make a run in our tournament.

VOTE: The Greatest Christmas Movie of All Time (8) 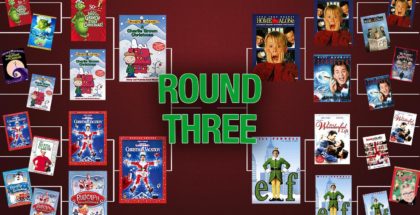