While there are an incredible abundance of existing and soon-to-come craft releases in the U.S., Brewmeister‘s Snake Venom is a rare sight in these parts. I recently had the honor of getting to try this beer that tops many beer drinkers lists. These aren’t charts for flavor and overall ingenuity, but simply because of the fact that it will knock you off your feet. At a staggering 67.5% ABV this fortified monster has made its rounds on the web as a viral hit, enticing the alcoholics of America with a great name and the promise that you won’t remember tomorrow. However, the real challenge isn’t staying alive after consumption, but rather just getting a hold of this beer in the U.S. in the first place.

Not a lot is known about Scottish brewery Brewmeister, however they do know how to make a name for themselves. The brewery had very modest beginnings, starting up on a farm in Royal Deeside, Aberdeenshire, on the funds of a student loan. Starting out with the 65% ABV Armageddon, it was clear that Brewmeister was working to push the envelope of what a beer could be. Working with a process known as fractional freezing, the beer is chilled to a temperature cold enough to freeze the present water while leaving the alcohol in a liquid state. The ice is then removed, and in the case of the higher ABV fortified beers, a measurement of ethyl alcohol is added to the beer to further heighten the ABV. And thus, Snake Venom was born.

This beer is strong. Do not exceed 35ml in one sitting.

Now at face value, Snake Venom is in fact a beer. The base beer is simply water, yeast, hops, barley, and wheat. The added ingredients include smoked peat malt as well as both ale and champagne yeast strains. It is the addition of ethanol during the fractional freezing process where people begin to question its authenticity as the “world’s strongest beer”.

Regardless of what the haters may think, I was able to get my hands on a bottle. To be clear, it costs about $60USD after shipping, and was only made possible because of a friend who had family connections in London. The secondary market that this was purchased from did not ship to the US. 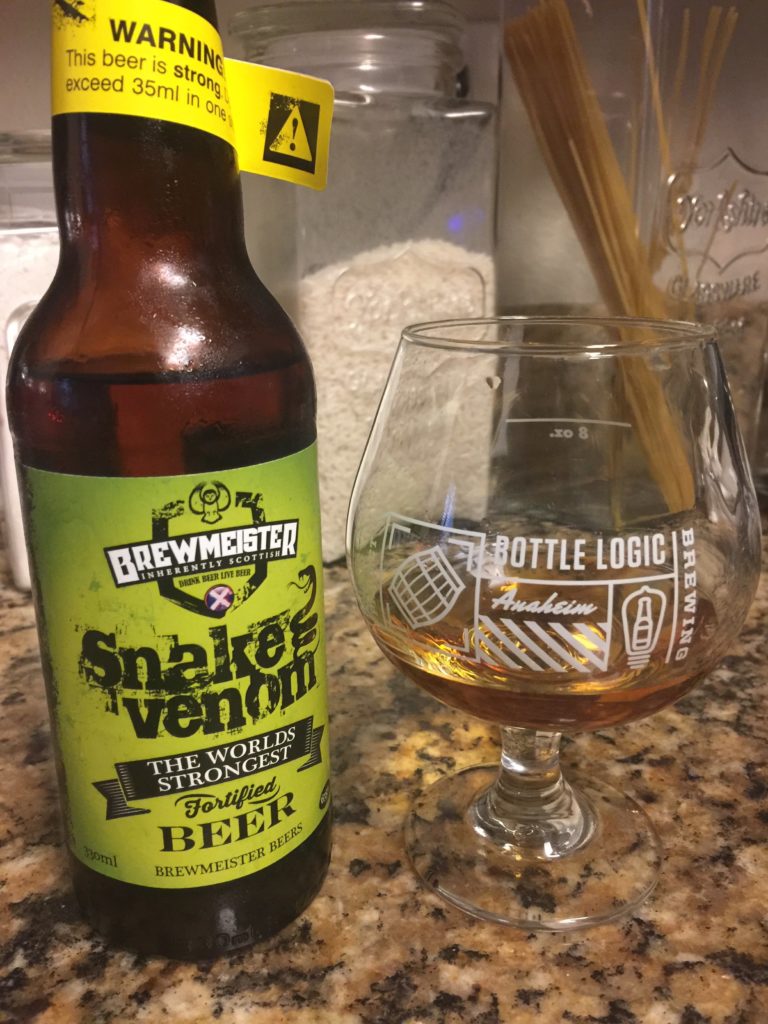 When poured, it has the same transparent caramel brown as the glass of whiskey. Carbonation, head, and lacing are noticeably absent. At the recommended ice cold serving temperature, the aromas are overwhelmingly boozy – straight ethanol that burned every hair in my nostrils. As a secondary aroma, and moreso as it warms, you do get a smooth peatiness from that added malt. At this point I was convinced that this must be a glass of single malt scotch. After letting the strong alcohol presence die down, the peatiness does strengthen, and an oakiness follows behind. Way in the back of the nose I get some dried fruit, similar to a dry sherry.

Upon sipping, you again receive an overwhelming burn. Ever tried shooting 190-proof Everclear? I have, and although I thought it was Tito’s, that’s besides the point. It effing burns. Much like this did going down. Admittedly, it did have a fairly pleasant warmth and went down very smooth. Again, the peat is very evident, giving strong notes of oak barrels and burnt wood.

Overall, let’s be honest. This beer never had the recipe to be great. It never strove to combine an array of ingredients and techniques to create a truly staggering beer creation. However, it did successfully change the way that we look at what beer can be. Fortified or not, Brewmeister has been able to create beers that push the envelope. It has put itself on a list that many have never been able to put themselves on. Am I glad that I got to try it? Yes. And I recommend anybody with beer money burning a hole in their pockets to do the same. You won’t regret it. And even better? The next morning you’ll forget that you even drank it.