Em Sauter’s book Beer Is for Everyone—and the web comic Pints and Panels on which it is based—is a simple concept brilliantly executed. Em is a cartoonist and an Advanced Cicerone®, and she combines her two seemingly disparate passions into a single project: cartoon beer reviews. The concept could seem like a gimmick if Em didn’t pull it off so well. Her simple but effective drawings are disarming and cheerful, immediately removing some of the intimidation factor some might face when reading beer reviews as novices, and the economy of information she provides is helpful without burdening the reader with insider language. As both an Advanced Cicerone and a brewery professional (she works for Two Roads Brewing in her home state of Connecticut), Em knows more about beer than the vast majority of drinkers, but she doesn’t feel the need to prove it constantly. She likes beer, she wants everyone to like beer, and her easy-going, humorous style helps readers feel like she’d probably like them too if they ever got the chance to grab a pint together.

Beer Is for Everyone collects some of Em’s favorite reviews, including classics as easily accessible as Anchor Steam and Bell’s Two Hearted Ale and as rare as 3 Floyds’ Dark Lord and Russian River’s Pliny the Younger, and new-found favorites from hip breweries like Spencer Trappist and Scratch Brewing. The reviews are divided into broad style groups (hops, yeast, Old World, etc), and Em introduces each section with comics explaining the driving ingredients or traditions behind each. The book opens in the way many beer books do with a section on the basics of beer, covering history, the brewing process, ingredients, glassware, and other well-traveled primer topics, but the format and tone are so fresh these don’t feel like throat-clearing the way they can in so many other beer books. 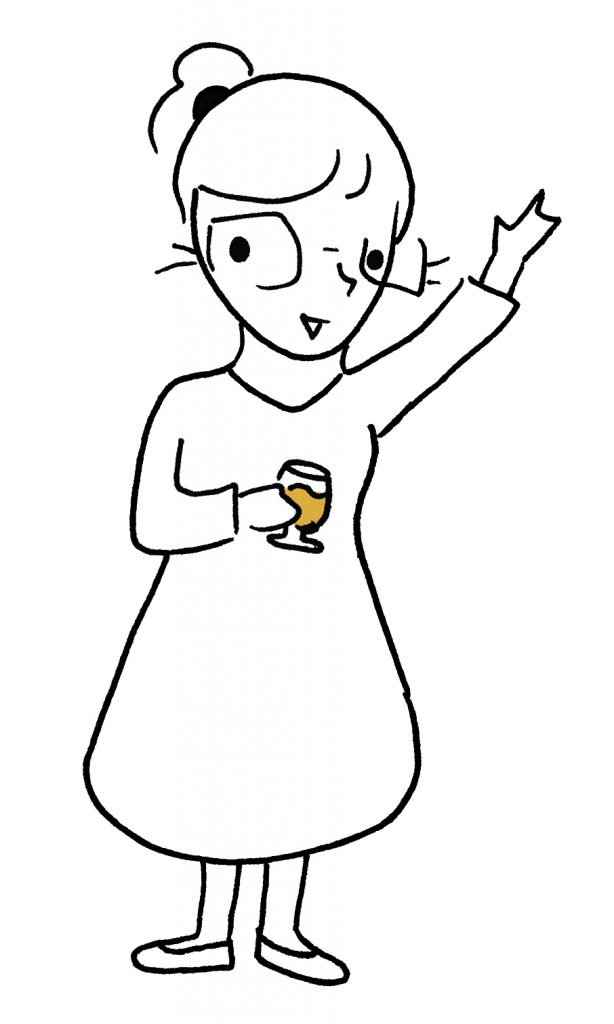 Em Sauter is helping newcomers get excited about beer in a totally non-threatening way, and helping seasoned beer veterans see their favorite drink with new eyes. Her efforts have led to her being recognized as a top tastemaker by both Pinterest and Wine Enthusiast magazine.

I recently had the chance to talk with Em about Beer Is for Everyone, the advantages of the comic format for reviewing beer, and the best beers from her home state.

PorchDrinking: We’ll start with the most important question first: which beers have you most been enjoying lately? 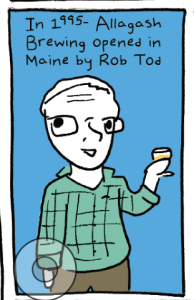 Em Sauter: I was recently in Chicago for the Cicerone Anniversary Party and had a beet saison from Forbidden Root that was pretty epic. I also recently drank a Fonta Flora Brutus Dandelion Sour that was so unlike any sour I’ve ever had. Delicate, grassy, tart, smooth. So good.

What is your background in beer?

I started my blog Pints and Panels in 2010 while at cartoon school (yep, that’s a real thing) at the Center for Cartoon Studies in White River Junction. My first beer job was selling beer, wine, and cigarettes in a shop in West Lebanon, NH. I mostly sold cigarettes but we always had fresh Lagunitas IPA and Dogfish Head 90 Minute IPA in the cooler (which was rare in 2011 where I was living) and we had a great Belgian beer selection that I dusted daily. I remember when we got Firestone Walker and I did a dance in the (sadly very hot) storage room. My boss was confused. I moved to Oregon in 2011 and worked at the very excellent 16 Tons Beer and Wine in Eugene for a year. It was the first time I saw beer treated with dignity aside from the brewery visits I had done. After a year there I was offered a job in Connecticut (my home state) as the communications manager of Two Roads Brewing Company. I’ve been there for almost six years.

As a Certified Cicerone, I have to ask a question for myself: is the Advanced Cicerone exam as brutal as I’ve been hearing? Because every time I look at the syllabus and think about scheduling the exam, I cry a little inside.

It was the hardest test I’ve ever taken. Mostly because the syllabus is so broad. You have to know so much that it’s quite daunting. I found speaking to people who had taken the test to walk you through it the most important part of studying. I was lucky to have a friend who had passed it and his flashcards were instrumental to me (all 700 of them, and I made 300 more of my own). I started studying in May and took it in September, even taking a week of my vacation time to study. After the test was over, I didn’t know what to do because I was so drained. I had a beer and just stared at it for a long time. But now I feel the pull of the Master exam and hope to take it within the next few years, which is pretty crazy! 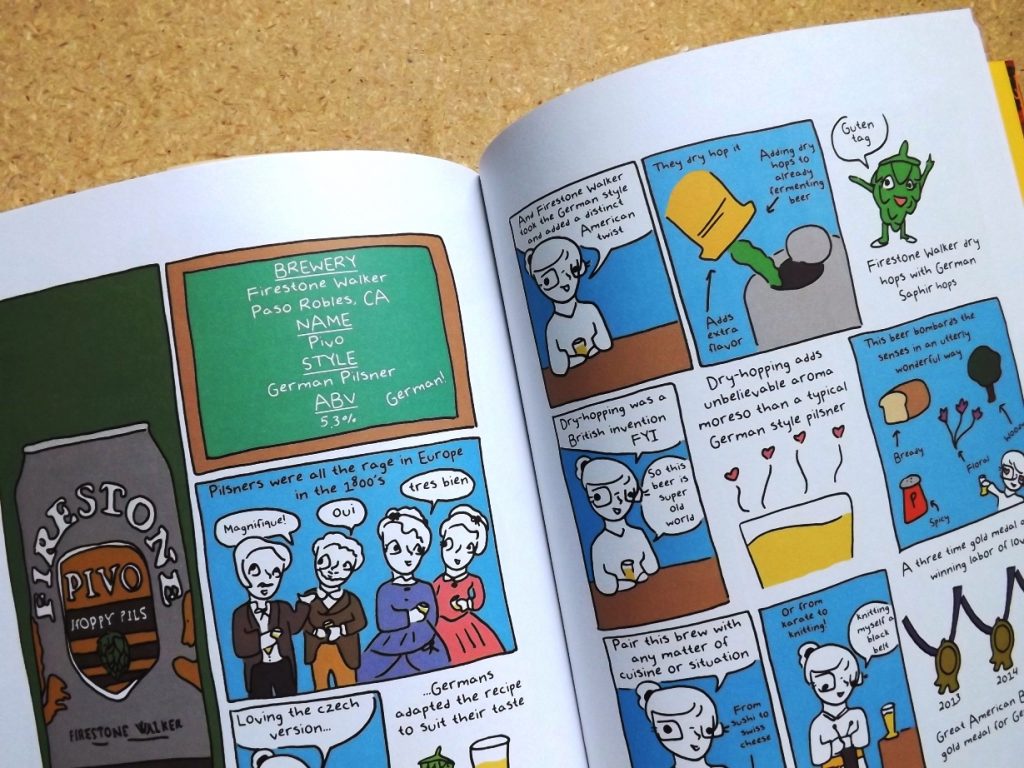 How did you decide on reviewing beers in the comic strip format? How did that develop?

Going to school for cartooning, you always are trying to find your niche, what makes you want to draw. I was lucky that CCS is in Vermont, where I was an hour away from the unbelievable Three Penny Taproom in Montpelier where they had Hill Farmstead Edward on draft all the time (the first beer that Shaun Hill distributed). We also were 20 minutes from both Harpoon and Long Trail, two huge organizations. Beer in Vermont was everywhere and it just made drawing about beer easy and fun and tied me to the local culture. I started Pints and Panels in 2010 (it was named by my boyfriend at the time who didn’t even look up from his reading when I told him I wanted to start a blog reviewing beer and he said matter of factly “you should call it Pints and Panels” which is such an amazing name. I’ll never forget that moment.) as a drawing exercise during the summer between my two years at school. I used to review a beer every day—everything from niche local beers to Heineken. It got me trying so many different beers and that’s another reason why I like it. Keeps me trying and exploring, although nowadays that’s not difficult to do since every town seems to have a brewery to visit.

What are the advantages and limitations of reviewing beers in this format?

The advantage is the easy digestion. It’s simple and keeps the reader engaged (I hope). People are very visual so giving them something to look at that’s fun, unique, and simple is the advantage. Disadvantage would be the time it takes to put one review together. You start with notes, then I do pen/ink in a drawing pad. Then I scan and color and do font treatments all online. There are a lot of steps. But it’s so worth it.

While reading Beer Is for Everyone, I smiled every time I saw you draw and review a brewery or beer I have a personal affection for, like Two Hearted Ale, Edmund Fitzgerald Porter, or Scratch Brewing. Do you have people submitting requests to you for comics of their favorite beers and breweries? Do you take requests?

I do take requests! That’s one of the best thing about beer, is the “try this!” mentality. Everyone has a favorite beer, so when people tell me that I need to try X beer, I take it to heart because there’s so much passion about beer. It’s fascinating really, especially when I travel. I always try as much beer as I can that I can’t get back in my state so I can review beers from all corners of the world or country. Man, there is so much good beer out there.

What’s next for your after Beer Is for Everyone?

Ha. Not sure. I’ve got a few prospects and ideas kicking around. Hopefully they come to fruition. I loved making the book so much, I really hope that I get to draw something similar in the future. It was a lot of fun.

As both a journalist and a brewery professional, what changes do you see in the coming years for the American craft beer scene?

I really hope the lager trend everyone keeps talking about really happens. For people who love the haze, I would be tickled to see Kellerbiers take off. It would be having beer go full circle back to tradition again. Plus it’s one of my favorite styles.

Finally, what’s one brewery from your state you wish everyone knew about?

The Connecticut beer scene is pretty under-the-radar, but we have so many great breweries. One that consistently kills it is Back East Brewing in Bloomfield, CT. Three of their IPAs made the top 25 in Draft magazine’s blind IPA tasting. Their Porter won gold at GABF in 2017 and bronze in 2016. Their owner Tony is one of the nicest people I know. Their beers are fun, tasty, and authentic. I really love what they are doing.

All images courtesy of One Peace Books. 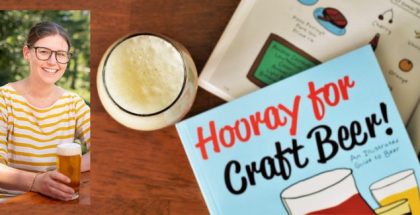 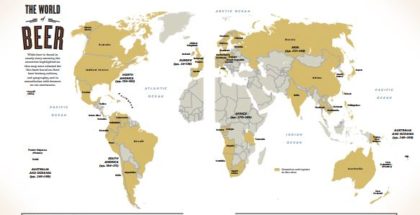