I’m nominating Apocalyptic Thunder Juice, the latest delight from Norway’s Amundsen Bryggeri, as the Official Juice of the ThunderCats. If this beer was available 30 years ago, that band of ninja felines would surely have partaken in a few after battling Mumm-Ra. And just look at the can artwork. It is safe to say that the ancients responsible for such totems could have been inspired by bipedal cats from outer space.

I’m here to discuss this beer, not take a trip down memory lane or dream of sporting Lion-O’s Claw Shield gauntlet bad-assery. As I’ve come to expect from the folks at Amundsen, Apocalyptic Thunder Juice is a solid beer. There aren’t many New England-style IPAs floating around this corner of Europe, so I was thrilled to get my hands on some. Though I cringe at the sight of beer reviews like “Super dank BRO” and “Juicy AF,” I’ll concede there is some merit to them.

Apocalyptic Thunder juice has a hazy, orange appearance and almost looks like there is actual orange pulp clouding up my glass. I mean, the name itself contains the word “Juice”, which gives you an idea of what the brewers were aiming for. The nose resembles the sparkling citrus beverage Orangina, with lots of sweet orange aromas. On your tongue, this beer also has the flavor and velvety texture of freshly squeezed fruits. The finish is juicy, but with just a hint of dank hop bitterness. I usually associate dankness with another agriculture sector, but hey, if the shoe fits…

The ThunderCats are not exactly a topic that runs through my head on a daily basis, but, as soon as I picked up this can, their theme song started up. It’s weird how certain things are never lost. Maybe one day Hollywood will reboot those furry weirdoes. In the meantime, I’ll keep drinking this milkshake and chasing my kids around while belting out the new theme song. 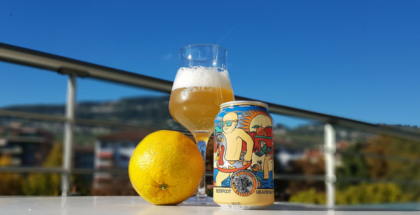