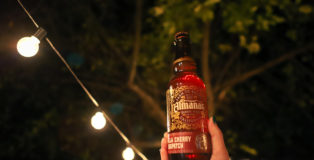 While my fridge is stocked up with all the winter goodies I could possibly want, I’m still on this huge sour beer kick that doesn’t seem to be going away! While visiting San Francisco over the summer before the big move, Almanac Beer Co. wasn’t actually even on my mind. And let me tell you… that was a mistake! While hunting for donuts in the Mission District, I got a glimpse of the Almanac taproom and had to stop in. Not only do they have an amazing and beautiful bar, but also their tap list of 15 beers is seriously on point and so is their food menu! END_OF_DOCUMENT_TOKEN_TO_BE_REPLACED

The holiday season comes to a close, but we look back on all the delicious brews we enjoyed during our time with family and friends. We also contemplate giving our livers a break in the new year…..NOT! Here’s What We’re Drinking.