In the world of meteorology, March 1 is the start of spring. So, happy spring! Because of a heavy story load last week, this week’s version is actually two weeks’ worth of beer submissions. Needless to say, there’s been a slew of good beers enjoyed by the PorchDrinking staff. So, forget that whole “March comes in like a lion,” deal — excellent beer always makes for an outstanding start to a month.

END_OF_DOCUMENT_TOKEN_TO_BE_REPLACED 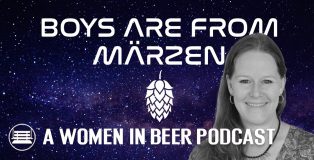 In Episode 27 of the “Boys Are From Märzen” podcast, Jessi Flynn of Kweza Craft Brewery in Kigali, Rwanda joins Kindsey Bernhard.

Flynn is the managing director of Kweza Craft Brewery, the first craft brewery in Rwanda; it is also owned and led by women.

END_OF_DOCUMENT_TOKEN_TO_BE_REPLACED

We’re all just trying to stay positive here — it’s been a weird week of weather, political news and a bunch of other not-great stuff. But as bad as things are, remember there are still good people and good things happening: NASA landed its aptly named “Perseverance” rover on Mars, along with its airborne compadre “Ingenuity.” Watch the video of the NASA team bursting into cheers when the rover successfully landed on the Martian surface — it’s a much-needed shot of good vibes.

So if you, like most people, can’t afford to up and escape the freezing cold on a plane to Cancun at a moment’s notice, you can chill here with us as we show off the awesome craft brews the PorchDrinking team’s been enjoying in this week’s What We’re Drinking.

END_OF_DOCUMENT_TOKEN_TO_BE_REPLACED

There seems to be little signs of slowing down as the new year is already a month behind us. This week has been a long one, but there’s an exciting end in sight. We can do it. For millions of Americans this Sunday features a “Big Game,” but let’s just all raise a glass and hope or pray that the team from down south doesn’t get the win. No one — not a single person — needs to see Number 12 win another damn championship. Here’s to hoping for a miracle and maybe some snow will come down in Tampa. While I continue to bet against Tom, here is What We’re Drinking.

END_OF_DOCUMENT_TOKEN_TO_BE_REPLACED

Can you believe we are already one month into 2021? It’s tough to say that 2021 is much better than 2020, so far. But, one thing hasn’t changed: the beer produced by a nation of brewers remains good as ever. The PorchDrinking team certainly loves to demonstrate that with photos of their beer-drinking experiences. We hope you enjoy this week’s version of What We’re Drinking, and we also hope that you have a moment or two this week to kick back, take a deep breath, and enjoy a malty libation of your own.

END_OF_DOCUMENT_TOKEN_TO_BE_REPLACED

The PorchDrinking team was out in force supporting craft breweries the past several days; look at all this fantastic beer. I think I got a second-hand buzz just compiling the list this week. Whatever other media you feed yourself today, hopefully you put aside some time to just be in the moment, take a deep breath and crack open a beer — one big cheers to you all.

END_OF_DOCUMENT_TOKEN_TO_BE_REPLACED

Pandemics and politics, sounds like it could be the title of a horror film. Unfortunately, the two topics have consumed nearly everyone’s lives over the past ten months. Enough about that, let’s talk about beer. Even if you’re partaking in dry January, don’t forget that your local craft breweries need your support more than ever. Many breweries were able to limp through 2020, but if you want to see your favorites breweries stick around for years to come then make sure you start 2021 off by supporting them however possible. Some of our staff has taken that mission to heart and is trying to save this industry that we all love. This is what we’re drinking.

END_OF_DOCUMENT_TOKEN_TO_BE_REPLACED

We’re back and well-rested, yet somehow exhausted, from all of the holiday hustle and bustle and time commitments. While 2020 is officially behind us — good riddance — 2021 isn’t exactly off to the best start it could be. In spite of weather and events on the national stage, the beer industry is still staying afloat despite pandemic shutdowns. That does not mean everyone, and that does not mean thriving. Dry January is popular for many “influencers” and eager resolution starters, but do what you can to continue supporting local. Buy shirts, hats and other merch or gift cards to use at a later date. Grab a beer or browse some online shops while checking out What We’re Drinking.

END_OF_DOCUMENT_TOKEN_TO_BE_REPLACED

Two things set in as a harsh reality this week. First off, we’re right in the heavy of the holiday season. Secondly, 2020 is over in two weeks and we’re still dealing with COVID. Thankfully the vaccine has started to get distributed. Hopefully in the near future we can all get together at a beer festival or a brewery and share some beers and make some memories. A heartfelt cheers and happy holidays to all of our readers. This is What We’re Drinking.

END_OF_DOCUMENT_TOKEN_TO_BE_REPLACED

December took decades to get here this year, but now it’s speeding by at an ungodly rate. The next few weeks are going to continue this trend I fear. I think I need a beer now in preparation and probably a few when the end of the year does come. The 2021-22 NBA season is right around the corner. Cyberpunk 2077 dropped yesterday. The Mandalorian is every Friday, and Season 4 of Netflix’s Big Mouth is only a week old. There’s plenty of content to fill your time off, so fill a mug with some cider or a spiked eggnog and let’s get the holiday celebrations started. While you get those cocktails going, here is What We’re Drinking.

END_OF_DOCUMENT_TOKEN_TO_BE_REPLACED

December is here, so let’s light the trees and count down the days until 2020 are over. This week started with a wintry mix, which is rare in Georgia, but brought a week’s worth of surprises. An elf seemingly wandered from the North Pole to my house as decoration. From the string lights on most surfaces, to the garland-wrapped bar car, I think I’m only missing the sleigh and reindeer. Maybe those are coming in the next few weeks? Until we get there, here is What We’re Drinking.

END_OF_DOCUMENT_TOKEN_TO_BE_REPLACED

You probably don’t need and don’t want a reminder, but Thanksgiving is next week. Which means that it is basically 2021, because we all know how fast this time of year goes by. While I’m a firm believer that it’s “always Stout season,” breweries are starting to release all the Stouts that we can handle over the next few weeks! That might be one of the only silver linings to end 2020. Travel plans and family/friend hangouts have likely been postponed, for the better. Be mindful about supporting local as the weather continues to challenge outdoor options for your favorite breweries and restaurants. Some of our local favorites are present this week, so here is What We’re Drinking.

END_OF_DOCUMENT_TOKEN_TO_BE_REPLACED

We know it’s Friday the 13th in 2020. But we’re choosing to be optimistic. There’s no need to be a half-glass full kinda person when you can easily keep your beer glass full no matter what level of color-coded panic we’re currently living in. The only color that matters is the color of the beer you’re drinking today. What’s in your glass? Here’s What We’re Drinking this week.

END_OF_DOCUMENT_TOKEN_TO_BE_REPLACED

Wow. Just wow. What a week it has been. I probably don’t need to tell you about the elections that are going on across the country. As of the moment of this writing, we’re all still waiting for the votes to be counted in Nevada and Arizona, as well as in Pennsylvania and Georgia. Needless to say, it’s been a long week and I think it’s probably best to keep this one short and sweet. Here’s to one of the most participated in elections in our history, and here is What We’re Drinking. Cheers.

END_OF_DOCUMENT_TOKEN_TO_BE_REPLACED

Tomorrow is Halloween, and like most of the holidays this year, it’s going to look a little different. The people who normally dread trick or treaters coming to their house will rejoice. They finally have a great excuse not to answer their door. Hopefully everyone else can find a safe, socially distanced, fun option for their Halloween this year. While you’re on our site, be sure to check out some of our Halloween-inspired articles. This is What We’re Drinking. END_OF_DOCUMENT_TOKEN_TO_BE_REPLACED

Just when I thought fall weather and championships were coming to Georgia, I was let down. Again. It’s been 80 degrees on average and the Atlanta Braves are back home from the playoffs. Alas, that’s how it goes sometimes. This week seemed to be a little more relaxing for my counterparts as you’ll see from the nature views to the cozy autumn vibes. Everyone is busy now more than ever, and with the holidays approaching fast, let’s do our best to slow it down. In the meantime, here is What We’re Drinking.

END_OF_DOCUMENT_TOKEN_TO_BE_REPLACED

Fall weather and a post-season push from the Atlanta Braves are making this month quite enjoyable here in Georgia. It has been a lot easier to find joy and happiness in small things in this ravenous year of 2020. COVID-19 and the presidential debates are prominent reminders of what is important right now and in the future. In the meantime, here is What We’re Drinking.

END_OF_DOCUMENT_TOKEN_TO_BE_REPLACED

Fall is officially here and our lives are about to be taken over by pumpkin spice lattes, if they haven’t  already. Another way many beer lovers look at fall is that it kicks off Stout season with the cooler temps settling in. Seasonal food and drink can be a lot of fun and our crew here at PorchDrinking has been highlighting a seasonal beer lately — Oktoberfest beers. Check out some of our articles lately and give some seasonal offerings a try! Here’s What We’re Drinking. END_OF_DOCUMENT_TOKEN_TO_BE_REPLACED