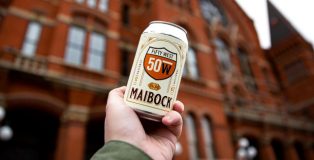 It’s Bock season! Just as Oktoberfest celebrates the transition from summer to the colder months, German brewers also feel the need to brew celebratory beers for the period when the daytime begins to warm up, but the evenings and mornings are still chilly. Maibock, from Cincinnati’s Fifty West Brewing Company is the perfect beer to fit the bill.