As we enter September, this week’s edition is a mixed bag. Just as the weather is in flux, you’ll find that the Porchdrinkers’ beer choices vary greatly. You’ll find a crisp, refreshing Berliner Weisse for hot weather, an Oatmeal Milk Stout for cool weather, and everything in-between. Grab a beer and a notepad because you’re about to discover What We’re Drinking! END_OF_DOCUMENT_TOKEN_TO_BE_REPLACED 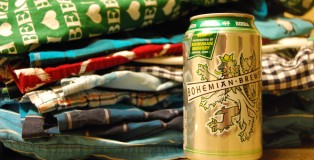 Among the numerous reasons that I enjoy writing for PorchDrinking.com is that it allows me to drink beer at the laundromat. Now, I’d typically shy away from popping the top on some suds in a place such as this, and surely there’s some legality issues at play (or at least some questions of decorum, especially here in Salt Lake City). But I feel that writing for a reputable, national beer blog like PD brings to my drinking some professional perspective, thus justifying this laundromat imbibing; I have a beer showcase due tomorrow, and I’ve been going commando, as they say, for damned near a week now.

For this public showcase I went with a beer from Midvale, Utah’s Bohemian Brewery. I chose their 1842 Czech Pilsner. Why? Because I enjoy this light-bodied golden lager? Yes. But also because the silver can, in the right light, looks like it could be full of off-brand soda, or as we call it in my home state of Michigan, pop. END_OF_DOCUMENT_TOKEN_TO_BE_REPLACED