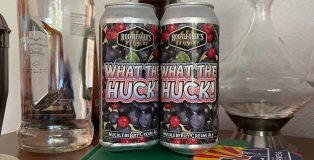 Bootlegger’s Brewery, based in Fullerton, California, is working to change that. The brewery’s Huckleberry Cream Ale, What the Huck!, made its debut in late January, 2020, and has gained many a fan since. Brewed with Cascade hops, 2-Row barley, flaked corn and, of course, loads of huckleberries, What the Huck! was the brainchild of Bootlegger’s Regional Manager, Kristyn Biggerstaff.   END_OF_DOCUMENT_TOKEN_TO_BE_REPLACED

One of the greatest things about craft beer is the actuality that people are being introduced to it every day. Whether by sheer curiosity or encouragement, craft beer finds it way to someone’s palate for the very first time. Although many will argue that the craft beer scene is becoming over saturated, there are still markets that have tons of potential. If you reside outside of the Southeast you may consider Virginia, North Carolina, and Florida as big brewery states for beer chasers and beercations. Emerging as a front runner for brewery hot beds, Charleston, South Carolina is adding on to it’s already impeccable list of reasons to visit and helping put South Carolina on that very radar. END_OF_DOCUMENT_TOKEN_TO_BE_REPLACED