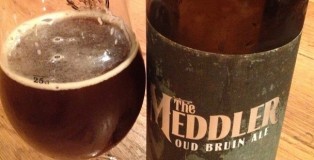 When it comes corked in a Belgian bottle, I’m that much more excited about trying new beers. The Meddler from Odell Brewing Company is a rendition of a traditional style Flemish ale, Oud Bruin, in which traditional yeast is mixed with bacteria to produce an honestly sour concoction. Uncorking this hibernating beast scared my roommate away from his fixation on a two-star Netflix movie, not because of fear, but because he is well in tuned with the sound of beer corks popping. END_OF_DOCUMENT_TOKEN_TO_BE_REPLACED