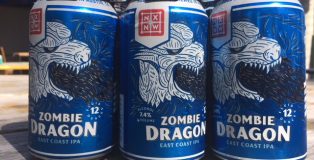 Davis Tucker is one of the OGs of the Austin craft beer scene, originally brewing the Pecan Street Lager through a contract brewing arrangement with Shiner back in the late 1980s. He went on to open the original Copper Tank Brewery, but left that partnership shortly after, “I knew pretty quickly that I wanted to go out on my own,” he said. In September of 1999 he established North by Northwest Restaurant and Brewery (NXNW) and it remains the longest standing brewpubs in the city.