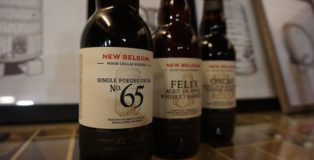 A little over a month ago, we reported on New Belgium’s decision to reimagine their specialty brands with the suspension of their popular Lips of Faith series and the implementation of their Wood Cellar Reserve series. Two weeks ago while attending the debut of Le Kriek Noir, the first entry in their new cork & cage Wood Cellar Reserve line, we were also treated to a sneak preview of what’s coming down the pipeline as well as a familiar brand that will also receive some fresh new packaging.

On Tuesday New Belgium Brewing Company announced that the second beer from its highly anticipated Wood Cellar Reserve series will be released this upcoming Saturday. At 8.5% ABV, single Foeder Oscar No. 65 is an unblended dark sour that has been maturing for 12 months in a 100 percent Missouri white oak foeder. According to the brewery, the beer pours dark walnut red with subtle notes of vanilla and coconut. These notes play beautifully with notes of plum skin and cherry Coca-Cola. This is a first run through using this foeder and only fresh beer will touch the American oak for the first time, thus the flavors for this release cannot be replicated—making this release truly special. END_OF_DOCUMENT_TOKEN_TO_BE_REPLACED 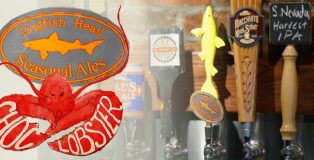 There are few breweries that cause every American beer enthusiast to pause when their name is uttered. Dogfish Head has a foundation based on being one of those breweries that, when mentioned, everyone holds their breath in anticipation of hearing what is said next. Some amazing beers have come out of there, and I am not talking about exceptional IPAs or Brown ales. What I mean are collaborations with world renowned rock bands, a stout made from ingredients from each of the world’s continents, their Ancient Ales Series, and so much more. Maybe that is why I wasn’t taken aback when I found out, back in 2012, that they had brewed a beer with lobsters and cocoa. END_OF_DOCUMENT_TOKEN_TO_BE_REPLACED