Once upon a time, a time one day ago in fact, a single man braved the single worst element, wind, and walked the entire one block down to his favorite watering hole. Once he found a single seat at the bar, he knew it was time to make the #1 most important decision of his night: What will my first beer be? After scanning the droughts for one minute, his eyes finally came upon a single tap placed by its lonesome at the end of the bar, the tap for Breckenridge Christmas Ale. This was to be his first beer of the night. There was one thing amiss about the drought tap, however, atop it sat a single piece of paper. Taped to the back of the tap with one measly piece of Scotch tape, the single piece of paper simply read: “Christmas Ale : $1.”

The first sip immediately tasted of spruce quickly followed by a creamy caramel even Snickers could be jealous of. As the beer warms, one degree at a time, the sharp sense of smokiness comes to be first in line. Sipping Christmas Ale is easier than a one-star Sudoku, but still packs one hell-of-a-taste, and at 7.4% ABV, one hell-of-a-punch. With its deep stained wood color and what can only be describes as a “first snow of winter” aroma that includes strong scented Mt. Hood hops, Breckenridge Christmas Ale should be a #1 choice of those who find winter to be their #1 season.

Roundtable Discussion: Eating the Same Meal or Going Vegan for a Year 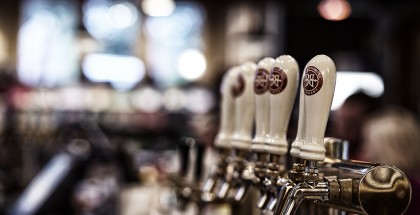