Beer should be enjoyable. That’s simple enough, right? But sometimes I feel like as beer nerds we lose track of that. I know I do. I spend way too much time rummaging through Beeradvocate[1] and ratebeer, I obsess over “white-whale” beers and it legitimately bothers me when I try a much-hyped, rare, “highly rated” beer and it just disappoints me[2].  Then I start thinking about all the time I spent checking draft lists[3] and twitter feeds and the disappointment turns into pure anger, mostly directed at myself. I won’t even go into how frustrated I get at beer distribution[4] and beer laws because I am sure anyone reading this already feels my pain there. But here’s the good news: it does not have to be this way. Assuming you live close to a city, I can almost guarantee that you have phenomenal beer in your backyard[5] and you should be drinking and enjoying it. Not because it’s easy[6], but because it’s delicious and worth knowing about. Night Shift’s Ever Weisse, a superbly funky, sinfully red sour Berliner Weisse beer is the perfect example of the beers we should all be spending more of our time on.

Let’s get something out of the way. When I say Ever Weisse is a sour beer, I mean it’s really quite sour even when compared to other beers of the same style–or any style for that matter. I personally enjoyed that because recently I have been making a concerted move away from my usual hop-centric mindset and trying to explore different flavors. Hop bombs are great, but there’s more to life – and beer – than IBUs. All this to say: Ever Weisse is a sour sour. When I first tried it, the bartender warned me of its tartness and my first words were still “wow, this IS sour”. Night Shift famously[7] does not shy away from big, forward, bold flavors so it is clear that this is what they are going for. This is not a one-note liquid Sour Head candy. It is complexly sour and tart in the way a bowl of fresh berries or really good jam is. And besides, what’s a more refreshing flavor than fruity sourness? 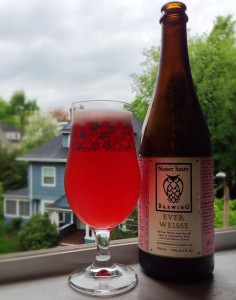 Their brewery in Everett is the only place you can get bottles of Ever Weisse. I visited Night Shift on a soggy, gross, uncomfortable spring day with a good amount[8] of traffic after I had been locked in front of my computer for days. It was just the perfect elixir. If the weather that day was a showcase of the worst parts of spring, a bottle of Ever Weisse holds its best. Night Shift ages Ever Weisse with fruit and flowers and you can distinctly taste the chopped Strawberries and Kiwis on your first sip and smell the Hibiscus as soon as you pop the cork. Ever Weisse pours with a surprising amount of white, light head as one of the most beautiful beers I have ever seen. It drinks like a brisk spring morning after a rainy night. The carbonation and the aforementioned tartness prevent an overly sweet sticky note effectively. I love strawberries but there’s little I hate more than most strawberry-flavored things[9], especially beers. This one is different than most strawberry beers I’ve had, because when you taste the strawberry in Ever Weisse, you really do taste the fruit. I know Night Shift is extremely careful with where they get their raw ingredients and how they use them and it shows. This attention to detail makes Ever Weisse not only tastier but also more enjoyable and less tiring sip after sip since it never overwhelms your palate with a monotone sweetness but rather fruitiness which are two very distinct flavors. After a while, Ever Weiss develops very satisfyingly, with its sour notes becoming increasingly fruitier and the Kiwis, not the Strawberries, becoming the focus. After I was done I found myself wanting another glass of Ever Weisse, which is highly unusual behavior for me when it comes to fruit-oriented beers.

Ever Weisse is stimulating and invigorating not just in its flavors but in the thoughts it provokes. I found myself wondering again and again, why aren’t more people talking about this? If nothing else, Ever Weisse is just beautiful to look at. It has all the traits of the great cult beers: it’s complex, delicious, limited and innovative. My point here is, I would gladly go to absurd lengths seeking this beer out. But I am so glad the good folks at Night Shift make it so I don’t have to. Not only are bottles of it available fifteen minutes from my apartment, but also now I am guaranteed to get them and all the other delicious seasonal sours whenever they come out. Night Shift has recently launched the “Sour Futures” program, which enables you to directly reserve bottles of their sours, and gives them the opportunity to raise capital to make even more delicious beer. It’s not a win-win. It’s a win-win-win. Simple. Enjoyable.

[1] In a recent conversation with PorchDrinking’s founder Tristan Chan I compared those forums to Game of Throne’s “North of the Wall” and I totally stand by that. It’s where the wildlings live. Alternatively, this.

[2] If a psychologist wants to understand or study herd mentality, please head over to those websites and click on most of beers with a 100 rating. Or, may I suggest, just go straight to this one.

[4] Why can I order beer from Denmark but not from Vermont? Why?

[5] Admittedly, I have not lived in many cities. But of the ones I lived in, I highly recommend Willoughby in Cleveland and Mount Carmel in Cincinnati. And if you happen to be in Brazil try Bodebrown and tell me what you thought about it.

[6] Please note that this is not a “support local” plea. I just think this is in your best interest.

[7] I feel completely comfortable making this statement about a brewery that makes a beer aged in Habanero peppers and a white Stout. These guys push the envelop, in a good way.

[8] I have only lived in Boston in the post-“Big Dig” era. And every time I drive it shocks me to think that this amount of traffic is an improvement over anything else.

[9] And when it comes to green apples it’s the complete opposite. I never really enjoy the fruit, just green apple flavored candy. Aren’t you glad you know that now?