In the midst of nearly killing ourselves riding our bikes through the Rocky Mountains a few weeks back, my friend Brennan and I, along with our stalwart sherpa, Ryan, found our way to Ft. Collins’ infamous New Belgium Brewery. This was no accident, as their bike-centric and eco-friendly outlook on transportation and beer production perfectly aligned with the concept of our trip. I had heard that their brewery tours were second to none, but was highly disappointed when a few weeks out I tried to book one, only to find out they were filled up. Luckily, our sherpa arrived early enough to secure us some walk-on spots on a tour, making the day a success on all fronts. (Click here for a full day’s pics and blog entry from our Day Four Ride and brewery tour.)

If there is one thing that New Belgium does that is unlike many other breweries is that they like to feed you beer throughout the tour. Most places take you on a tour (many times a boring one), and then they give you a pint or a few small tasters at the end of the tour. New Belgium tells you about specific beers, their unique brewing process, and lets you sip on them while you are listening, pointing out subtleties that otherwise might be lost at the end of a tour. For my money (which is zero dollars to take the tour), it doesn’t get any better than smelling hops that create certain flavors, or tasting an ale before aging and a sour after a months of marinating in a French Oak barrel. Bottom line is that if you are in Ft. Collins this is a must experience, and if you live there I would visit often as they will allow. 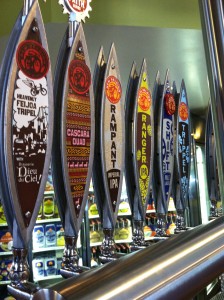 Now, New Belgium’s summer seasonal, Rolle Bolle was one of the beers they fed us on the tour, one that our wives welcomed us home with a growler of, and one that is readily available in all places that sell New Belgium beers. The name comes from a game of skill that is some bizarrely amazing amalgam of shuffleboard and curling (see New Belgium beer trailer for a better description). They have two Rolle Bolle courts on the premises that patrons and employees are encouraged to enjoy along with a pint, and if you are drinking this crisp sessional seasonal blonde ale there might be several.

Rolle Bolle, the beer, pours muted yellow in color with plenty of white foam filling out the top of a pint glass. The people at New Belgium will tell you that it smells like Juicy Fruit gum, and though it has been over twenty years since I had a stick, crazy if my first whiff didn’t bring back that nostalgic smell of stale contrived fruit flavors. Rolle Bolle’s smell comes from a bouquet of natural fruit aromas generated by the four different hops used in the brewing process. After inhaling the aromas coming from the glass, the taste leaves little to the imagination. Hints of citrusy (one might say “juicy”) fruit, derived from the soursop and monk fruit that the beer is made with. Tartness at the end, but no real bite in it, leaving the palate refreshed and ready for more.

Fake moustaches given out for pedal bus tours, a slide outside the tasting room, climbing walls in the barrel aging room: the appearance of this brewery screams irreverence…on the outside. But what goes on inside couldn’t be more professional. They take their work seriously, and it seems they take their play just as seriously. It is obvious that they are meticulous when it comes to imagining and creating some of the best beers in the world. Learning about New Belgium’s dedication to sustainability, employees, and (most importantly) the beer itself, gave me a new respect for the “craft” of craft brewing. Rolle Bolle is a fantastic example of how they thought about the beer, thought about how and when it would be consumed, and came up with a name that encapsulated both their spirit and the spirit of the beer (which may be one in the same): fun, playful, and good over and over again, like rolling a wooden cheese wheel across a banked concrete alley in hopes of landing it in a little red circle. Bulls-eye, gents, bulls-eye. This one hits the mark for drinking on the beach, quenching your thirst after a ride, nearly killing neighbors and small children with fireworks on the 4th of July, or rocking a game of the old Rolle Bolle. Try some and enjoy. I know I did (see pic below). 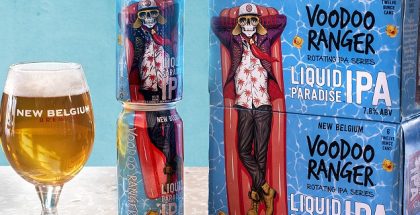 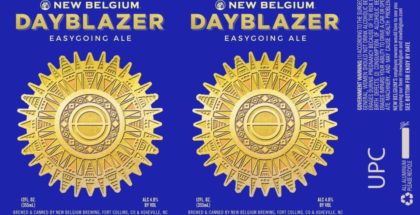