I may be a bit biased with this one, because I’m OBSESSED with the Olympics.  I mean, hum along to the Olympic Fanfare every time they play it on the TV until my husband stares at me like I’m nuts, can’t talk about anything else for the two weeks before, spend two weeks straight at home on my couch, obsessed.  Clearly, I’m not alone, based on our Roundtable for this week.  Without further ado, here’s why we think the Olympics are the definition of Awesomesauce:

The Opening Ceremony is an opportunity for the host country to show off their history and culture, and to present their vision of the games to the world.   There are always some amazing performances (Beijing was really cool, and I really liked Sochi’s opening ceremony), I generally learn something interesting that I didn’t know from the commentary, plus, there’s usually a pretty amazing fireworks show at the end.  Lastly, if watching the Olympic cauldron being lit doesn’t make you a little goosebumpy, I’m pretty sure you’re not human.

This goes hand in hand with the Opening Ceremony- the outfits for some delegations are FANTASTIC (see: the white sweatpants and mom-sweaters that Ralph Lauren designed for Team USA this year and the pants for the Russian curling team– REALLY?!?)  Also the official outfits of the volunteers who help run the games are always great.  The outfits for the volunteers at these Sochi games, for example, are VERY colorful.

For two weeks, everyone tries to pretend that they like each other, even if they can’t bear to be in the same room, all in the spirit of the games.  Conversely, it’s lovely to see when others truly rise above and beyond in the name of sport and fair completion.  Did you see the Canadian coach who assisted a Russian cross-country skier finish his race by replacing his broken ski?  Excuse me for a moment, there’s um…something in my eye…

That man could narrate paint drying, and it would sound epic.  Who else can make a credit card commercial give you goosebumps?  No one, that’s who.

Since the modern games are now ALWAYS deeply integrated with social media, we not only get an insider’s view of the games from the athletes’ Instagram and Twitter feeds, we also get some awesome new memes every few years.  Some of the biggest ones from the last few summer and winter games: McKayla Maroney is not impressed, #sochiproblems, Ashley Wagner face, and that one bobsledder who keeps getting stuck… 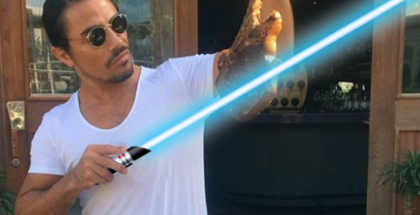