It’s almost Colorado Craft Beer Week so it’s time to get that liver-piece primed up and ready to go. Please follow along as we showcase the not-to-miss events in this week’s Weekly Denver Beer Beat including the first part of Colorado Craft Beer Week, some more beer releases, beer dinners and other brewcentric badassery in the Denver Metro area. Yeahbud!

While I divulge in great specificity (well, mostly, depending on how much info a brother can get); all events are subject to change. So it’s always good to follow up with your favorite craft brewery, delicatessen and brewpub through social media and to check back with PorchDrinking.com for updates on all things craft beer!

River North Brewery (Denver) – The RNB folks are tapping J. Marie Barreled & Bretted for Wayward Wednesday. We suggest you get down there with the quickness; this won’t last too long. 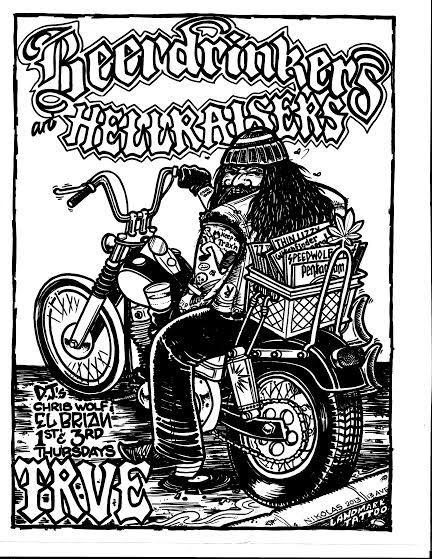 Avery Brewing Co (Boulder) – Coming up this Friday at 5pm is the annual release of Avery’s Samael’s Oak Aged Ale. This is one big ABV brew, typically weighing in over 15% ABV. Avery will have this year’s plus several vintages from their cellar of every single year Samael’s were made. Adam Avery loves drinking wine and wanted to create a beer that captured the intensity of flavor, the wood aromatics, and the vanilla notes of Madeira, one of his favorites. So in 2006, Avery brewed a big English-style barleywine and aged it for 4 months with toasted and raw oak to get those desired aromas and flavors. Grab a bottle for now and a few to lay down in the cellar.

The Fort Collins Brewery (Ft. Collins) – To celebrate the seasonal release of their Maibock, FCB introduces a Goat Cheese-Making Class & Maibock Pairing Dinner set for Friday, March 21st. The cheese-making class starts at 5:30pm and the 2-course dinner will begin at 7:00pm in the FCB Community Room. RSVP by calling The Fort Collins Brewery at (970) 472-1499 or email rsvp[at]fortcollinsbrewery.com. Cost is $35 for just the class or $75 for both class and dinner. FCB’s seasonal Maibock is now available from March through June.

Now under the direction of the Colorado Brewers Guild, Colorado Craft Beer Week is a nine-day celebration of Colorado’s craft brewers, pubs and restaurants. Dozens of events will showcase brewers and educate beer lovers about Colorado’s unique craft beer community. 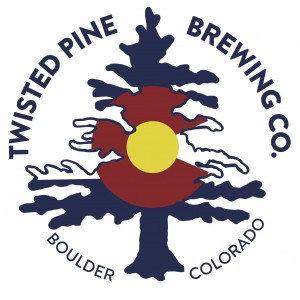 Twisted Pine Brewing (Boulder) – Special Small Batch Tapping! They’ll be tapping a keg of a different, limited quantity, small batch beer each and every day during CCBW (sometimes more than 1!).  Each day’s keg will be tapped when they open; you might want to make it a lunch date so you don’t miss out!  They’ll keep the full lineup under wraps, for now, but check their Facebook page during craft beer week for specific details. Stay twisted, Colorado! 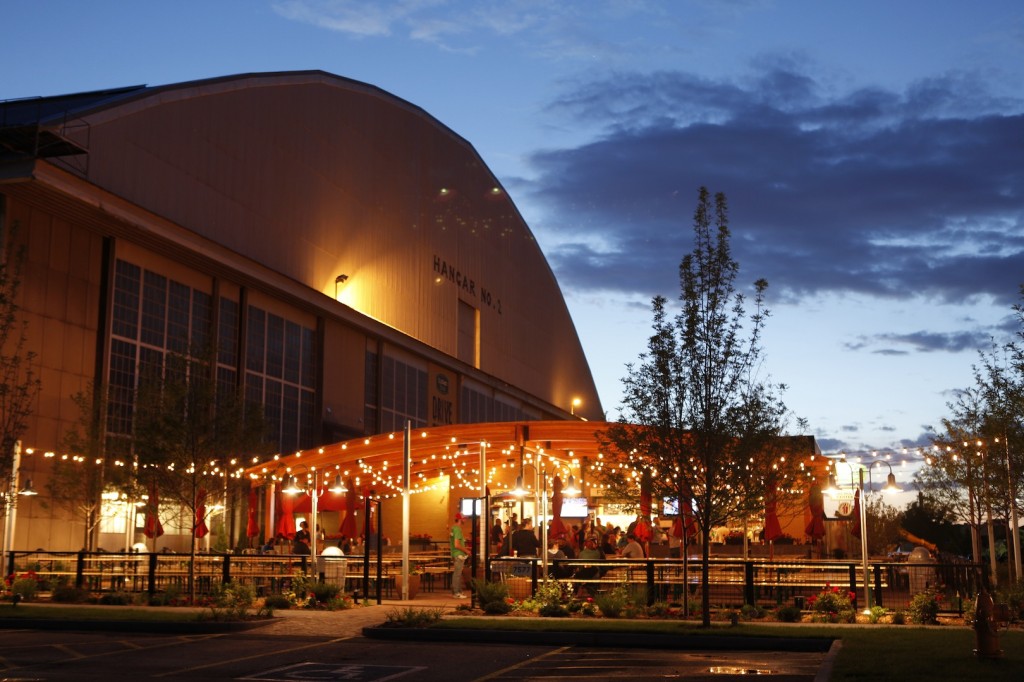 Epic Brewing (Denver) – A week long fundraiser! Drink up, friends!  All week long, Epic Brewing will be donating $.25 per pint sold in the tap room of our much-loved Escape to Colorado IPA to the Colorado Brewers Guild. Raise a glass to the CBG for all the work they do for Colorado’s craft breweries. The folks at Epic wouldn’t maintain such a moniker without being the epitome of its namesake . . . So they are bringing the party for the first day of CCBW.

Join them for Four Firkin Friday! If you haven’t had an Epic firkin yet, you are in for a real treat!  They’ll be tapping 4 firkins at 4pm. Get a flight of all four or a full pour of any one of them for only $5. Every penny from this will once again benefit the Colorado Brewers Guild.
Firkins include:
Sour Apple Saison with fresh ginger
Santa Cruz Brown with Novo Cascara (coffee cherry)
Escape to Colorado IPA dry hopped with Amarillo
825 State Stout with coconut 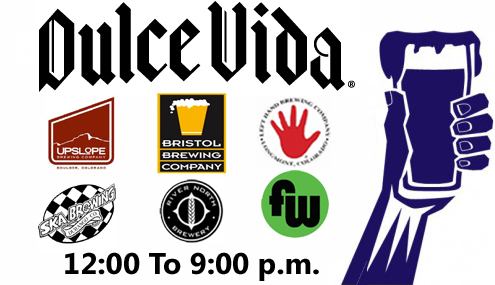 Dulce Vida (Denver) – Dulce Vida Grand Opening and Craft Beer Week Kickoff Party!
Dulce Vida is the Golden Triangles newest bar and restaurant.  They will be featuring Ska, Left Hand, Bristol, Funkwerks, Upslope and River North Brewing on our 6 tap draft trailer in addition to our 16 taps at the main bar!!! Join us starting at 12pm at 1201 Cherokee St.

Epic Brewing (Denver) – Beer School! Epic Brewing’s brewer Brian Arnold will be hosting an educational bit on beer tasting, styles and proper glassware. From 1pm – 2pm, Brian will walk you through beer tasting and complete sensory analysis. The one hour session will also include a short discussion of beer styles, storing/cellaring beer and which styles are appropriate for cellaring. Participants are encouraged to try out their new sensory knowledge in the tap room afterwards with one of our suggested flights or even a build-your-own flight from our 25 taps. Admission $5, space limited to 40 participants. Admission price is donated directly to the Colorado Brewers Guild. 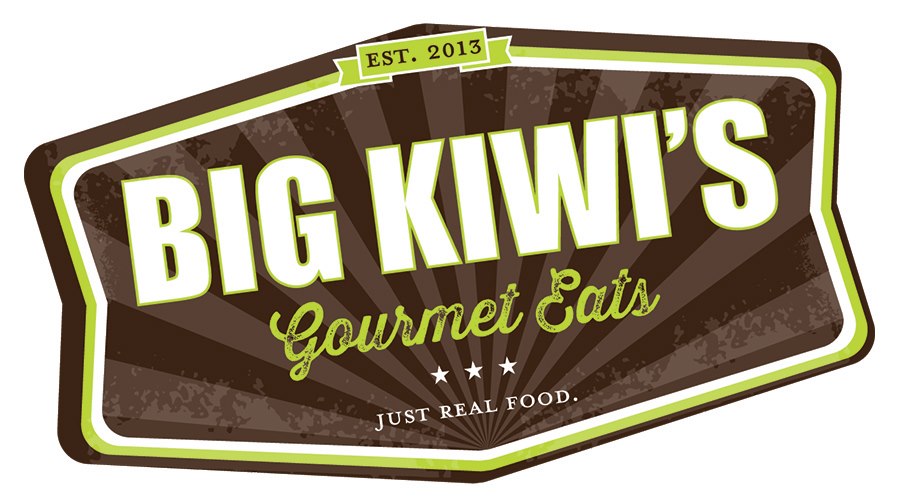 Epic Brewing (Denver) – Hangover Breakfast: Burritos, coffee and draft specials! Join Big Kiwi Eats at Epic Brewing Company from 10am to 12pm for a hangover curing breakfast the morning after Collaboration Fest! Big Kiwi will be offering up a variety of breakfast burritos including animal-free options. $1 off drafts with the purchase of a burrito. Other beverage options will include the famous Utah Sage Saison Bloody Mary, Brainless Golden Beer-mosa and just some straight up coffee, ’cause you know you need it! Novo will be here doing pour over coffee. 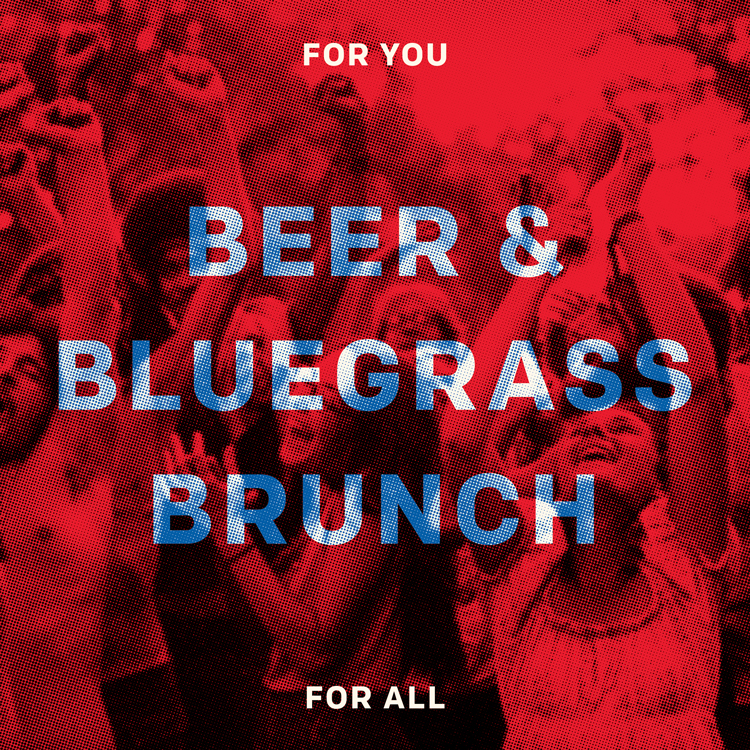 Station 26 Brewing (Denver) – Join Station 26 in the taproom for their first Bluegrass Brunch! They’re kicking things off at 11am with music from the Hayward Strangers and donuts from Glazed & Confuzed. They’re also releasing a Coffee Vanilla Porter just for the occasion!

Stapleton Taphouse (Denver) – Join the Brewers from the Wynkoop Brewing Company as they visit the Stapleton Tap House to tap their Barrel-Aged Barleywine from 6pm – 10pm. This special English-style Barleywine was aged for a year in old whiskey barrels, and has flavors of figs, fruitcake, raisins, and tobacco. The Stapleton Tap House is always a great place to experience Colorado’s Craft Beers, with 30 limited distribution Colorado breweries on tap every day. 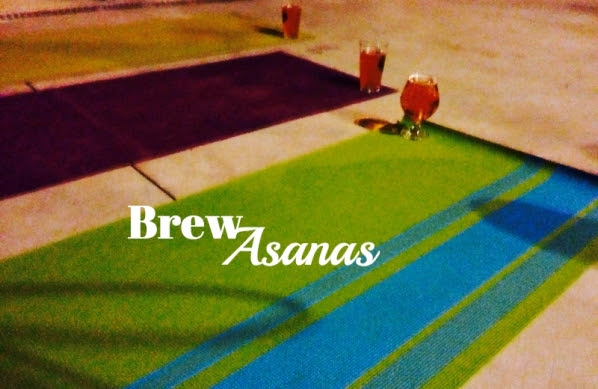 BrewAsanas (Denver) – Beer? Check. Yoga? Check. One might have to call it BrewAsanas. Could two things like these ever co-exist? You bet your flexible-ass they can! BrewAsanas takes a rocking one hour yoga class and follows it up with a brew in a local brewery.
This week’s classes are as follows:
  Monday, 24th at 6 p.m. – Jagged Mountain Brewery (1139 20th St, Denver) 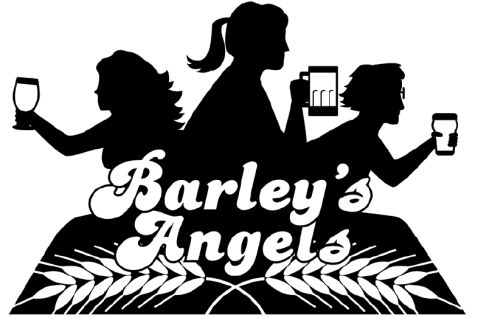 Barley’s Angels (Colorado Chapter) – Salsa and Beer pairing by Barley’s Angels (for ladies only!) Epic Brewing hosts the Barley’s Angels on March 24th, at 7pm for a taste of sweet, sweet heat! Brewer Kim Collins is hosting a ladies only event for a roaming pairing through the brewing floor. She’ll lead the group through a discussion of four craft beer tasters matched with locally made tomatillo, red, smoky jalapeno, and habanero salsas. Specific beer pairings will be revealed at the tasting. The tour will include a trivia contest about beer production, with prizes from Epic Brewing. Tickets will be limited. Register today to reserve your spot. To learn more about Barley’s Angels, visit them online for more info.

Lucky Pie (Lousiville) – Presented by Elevation Beer Company and Lucky Pie Louisville, this event will present a fun night of Trivia and beer at Lucky Pie’s Louisville location starting at 7pm. Enjoy 4 rounds of Colorado Beer related Trivia during Colorado Beer Week, while sipping on one of 7 Elevation Beer’s on tap.  Prizes will be rewarded for each round and the night will be hosted by Elevation Co-founder Xandy Bustamante.

The second half of Colorado Craft Beer Week should be a blast. Here are some future events to keep on your radar, because they are going to be so-gnar!

Barley’s Angels (Colorado Chapter) – Boulder Event: Upslope Brewing on March 25, 7pm. Upslope and Barley’s Angels are putting the Yum! into craft beer tastings with a pairing that matches four Upslope tasters with four bakery confections. Bouldern’s Samantha Rolen has carefully chosen the pairings and will discuss why she made her selections, while answering questions about the art and science of baking. Staff from Upslope will also be available to answer questions about the brewing process and give a tour. To learn more about Barley’s Angels, you can also visit our website at www.barleysangelscolorado.com
Great Divide (Denver) – Join them for their inaugural P.M. Beer Brunch at Snooze, an A.M. Eatery. Four Great Divide beers paired with four Snooze brunch favorites. 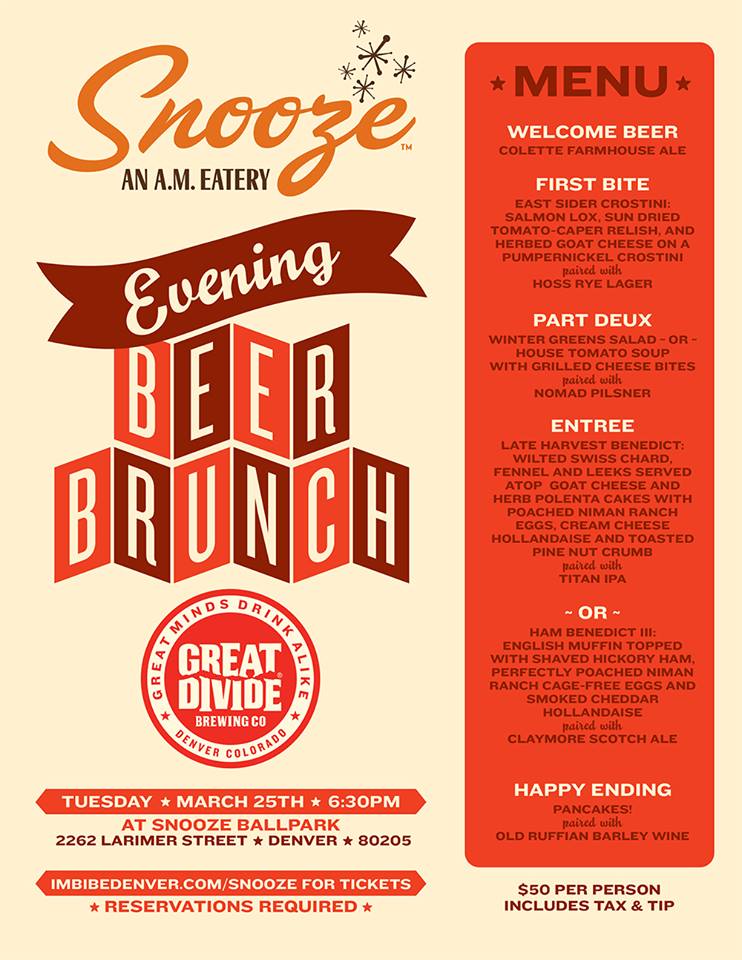