Well, we did it. We survived. We had some beers about it. A lot of beers. But moreover, we had an amazing time experiencing the breadth of craft beer awesomeness that is the Craft Brewers Conference. Follow along after the jump.

We hashtagged our way through seminars, the brewers expo and many events each day and evening. In the end, we probably missed out on some stellar tap takeovers and underground events. But, I digress, we definitely got our share. And an ‘Angel’s Share’ at that!

Denver rules. I am biased. I was so excited for our city to host the CBC and the World Beer Cup. I just knew that we could provide a great atmosphere with plenty of functions and HOPportunities for folks to enjoy great craft beer. Here are just a few of the ‘after hours’ events I got myself in.

Being a first time attendee to the CBC, I wanted to check out the Welcome Reception at Sports Authority Field at Mile High.I figured that the venue is a legendary experience and I wanted to brush shoulders with some of our local breweries working so hard to make enough beer to suffice the week of beer swilling masses. So, imagine drinking an 8-Second Kolsch from Elevation Beer Company on the same field and in the same refreshing manner that Peyton Manning Drinks Gatorade to re-hydrate on game day. Yep, we did that. Swill, swill, swill.  Ah, what’s up CBC?! Welcome to Denver. 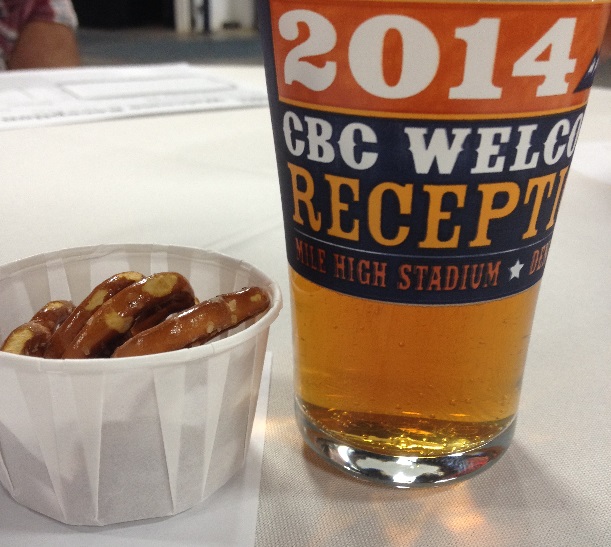 Some 40 breweries showcased some of their wares for the anticipatory crowds while patrons also noshed on some snacks. Chris and I, and a few of my other beer bros, also learned how to use metal tongs to coax crisp, thin Terra chips onto our plates at the snack station. Shit is wicked hard, btw. My takeaway from the Welcome Ceremony was that it was just really nice to breathe it all in because the week proved to be quite a feat of liver stamina and beer knowledge overload. Following the Welcome Ceremony. We decided it was time to #getsurly with some hard-to-acquire, not-available-in-our-state beeriness.

Three of Surly’s brews were tapped at Denver Bicycle Cafe and did not disappoint. The three brews were the perfect way to end the night. We sampled one of each. Furious – big sticky pale ale, Pentagram – puckering sour that finishes very well balanced and Blakkr – their collaboration brew with Real Ale and Three Floyds that was a big, roasty black IPA. The folks really know what they are doing over at Denver Bicycle Company. Coffee and bikes in the AM; beer and bikes in the PM. That’s what’s up!

I worked on Wednesday but the second the work bell rang (that shit didn’t happen for real; I just made that up), I headed over to the Source’ building’s Acorn! restaurant for some Post-CBC Beer Cocktails around 4:30pm. 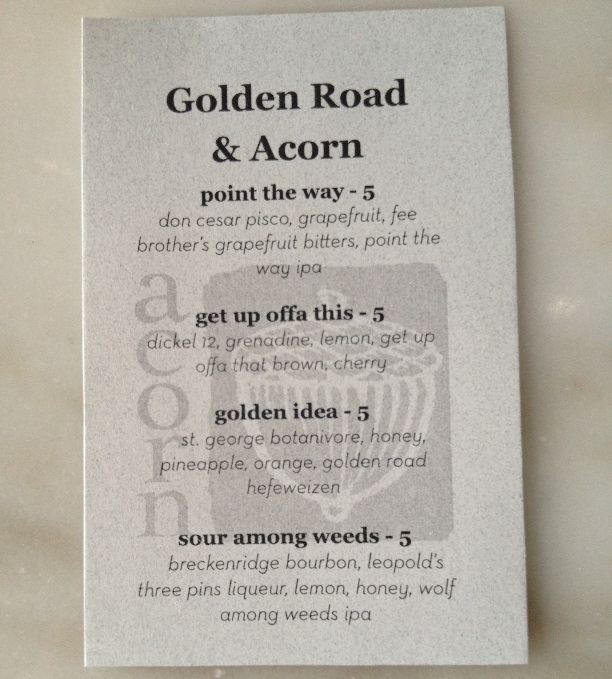 I was able to meet Golden Road Brewing’s brewmaster Jesse Houck and co-founder Meg Gill while enjoying crafty beer cocktails mixed by Acorn’s Bryan Dayton. Cocktails featured Golden Road’s Hefeweizen, Point the Way IPA, Wolf Among Weeds IPA, 2020 IPA and Get Up Offa That Brown. We were spoiled royally and didn’t pay for a sip. Thanks Golden Road and Acorn!

Next up was a jaunt from the Source to Denver Beer Co for their Pizza Party! Denver Beer Co through a good old-fashioned pizza party when they welcomed two of the city’s best pizza trucks, Basic Kneads Pizza & Brava! Pizzeria. There was also live music from Modern Whiskey Market and lots of suds flowing through the taps! PIZZA PARTY! 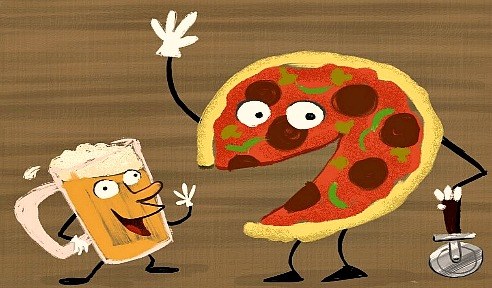 Immediately following this, I devoured a rice crispie treat from the Hops & Pie bakery-case as I was feeling unbalanced by the pH shocking amount of sour ale in my gullet. All in all, the day was nothing short of amazing. Anyone know how to get a sponsorship for #tums?!?

Being mad thirsty after hearing all the beer talk of the day, we all naturally gravitated towards cold barley pops at the beer stations/lounges. After getting some nosh and some delicious beers, we headed to a tap takeover at the new Denver brewery in town, Lowdown Brewery + Kitchen. We were welcomed with a bevy of amazing ales! 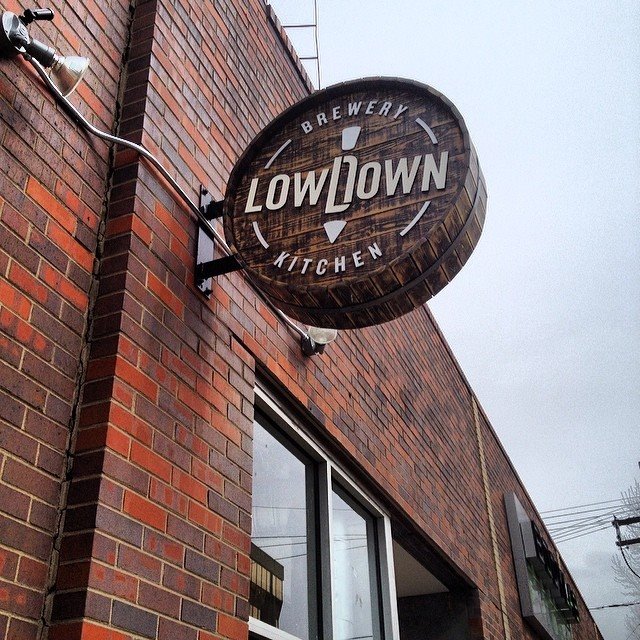 Following the Lowdown sesh, we ventured back downtown to Freshcraft for the Firestone/Stone tap takeover. I drank a 2003 Stone Imperial Russian Stout. That is all you need to know. Oh, I should say that I drank a 2003 Stone IRS right next to Mitch Steele, the brewmaster of Stone.  Yep. Good Thursday night cap. Knowing that Friday was another day of seminars and classes, we headed back to our caves for slumber.

Transitioning from education to full on party did not take long on Friday. A two block walk to the Wright Room above Appaloosa Grill yielded a Deschutes meet and greet. Planet Rouge, Green Monster, Fresh Squeezed, Black Butte Porter and a handful of other great tasting barley pops. Did I mention Planet Rouge. 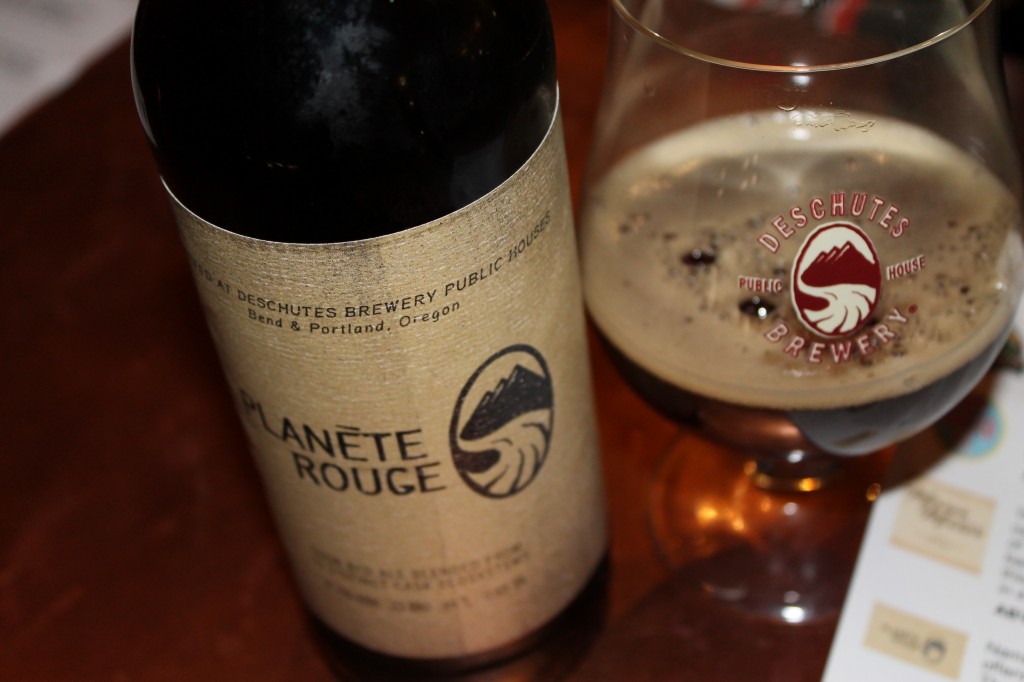 Like only available in Bend, OR Planet Rouge?  Okay, just making sure everyone read that. Deschutes new sour red ale is a blend of three different base beers brewed at each of the Deschutes pubs: 29 percent is Bend brewed The Dissident; 26 percent is  Sour Li’l Red from Bend;  32 percent is Portland brewed Sour Li’l Red; and the remaining 13 percent is Flanders Red from the Portland Pub. The beers were aged in barrels including Oregon Pinot Noir barrels,  14 different barrels in all, and “two strains of bacteria that we know of…” hence the name, Planete Rouge or Red Planet: 14 different ecosystems. This was a funky glass of cherries, subtle wood, and a backbone like a gorilla. Fuck. So good.

We then marauded over to the World Beer Cup.for the ‘Olympics of Beer Competition.’ This was no joke. Industry only event with buckets and troughs full of amazing beer from over 250 breweries. There was a cheese cart that would make even the most ‘cultured’ of cheesemongers blush, enough oysters to make the toughest of rapscallions cry and enough beer to make me cry. . .  Well . . . Almost!!! 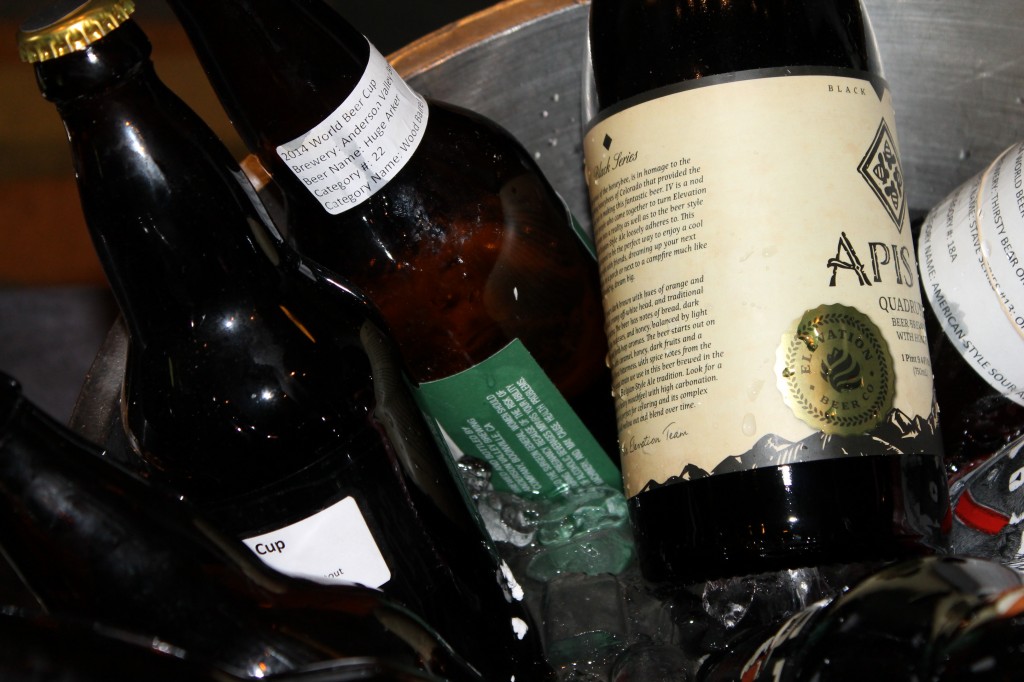 This event was the culmination of a great week. It was all so much more than beer. It was years of hard work, legacy and pride. It was long hours in the brewhouse. It was limitless poise and drive all compiled into one room that we were lucky enough to sit in as they started to announce all of the winners. At the end of the event, when it was all said and done, I truly felt as though I had accomplished a week rally of beer without ever sitting back to catch a breath. We all go through life and try to find something we are good at. These brewers, for that evening and for that moment in that ballroom, were being awarded and recognized for finding what they are good at and being able to share that with the world. I am looking forward to the Craft Brewers Conference in Portland, Oregon next year and will definitely be at the next World Beer Cup to cheer on and promote all things craft beer.