Welcome back to another installment of PorchDrinking’s Weekly Denver Beer Beat. The Denver Beat brings news of openings, releases, dinners, anniversaries, etc. This is a busy week. We are now in festival season and a lot of the events in Denver are continuing to overlap. Remember, if you are trying to hit a couple of events in one day, make sure to use safe transport such as a taxi, Lyft or Uber and please drink responsibly. 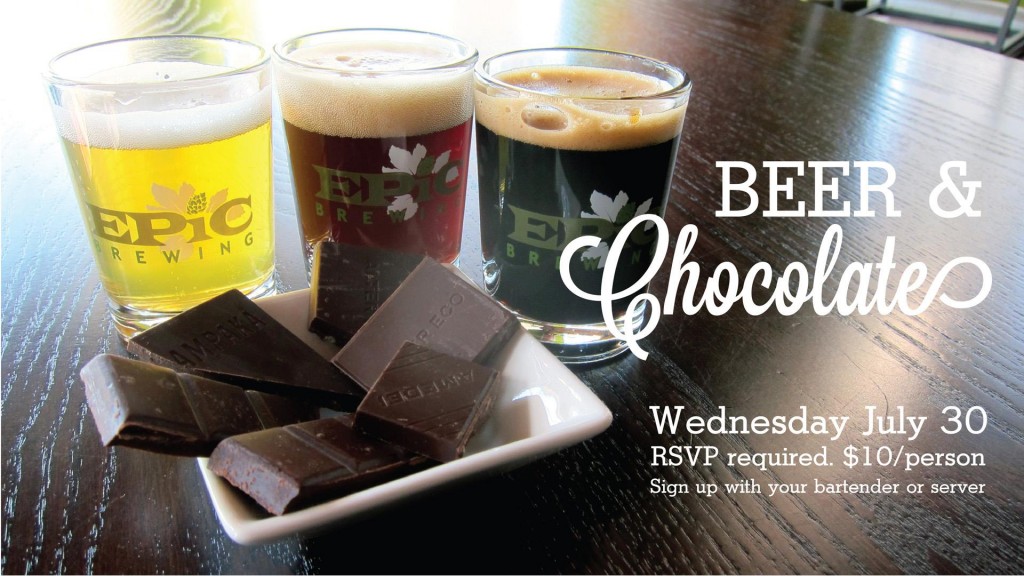 Epic Brewing (Denver) – Tonight is a special Beer & Chocolate Pairing event at Epic Brewing in Denver. For just $10 you can sample a variety of beers & chocolates. Sign up at Epic Brewing or email jennie[at]epicbrewing.com to reserve your spot. RSVP required. In the meantime, stop in this Friday for a special tapping of “Wild Peaches”, a peachy sour ale – starting at noon. 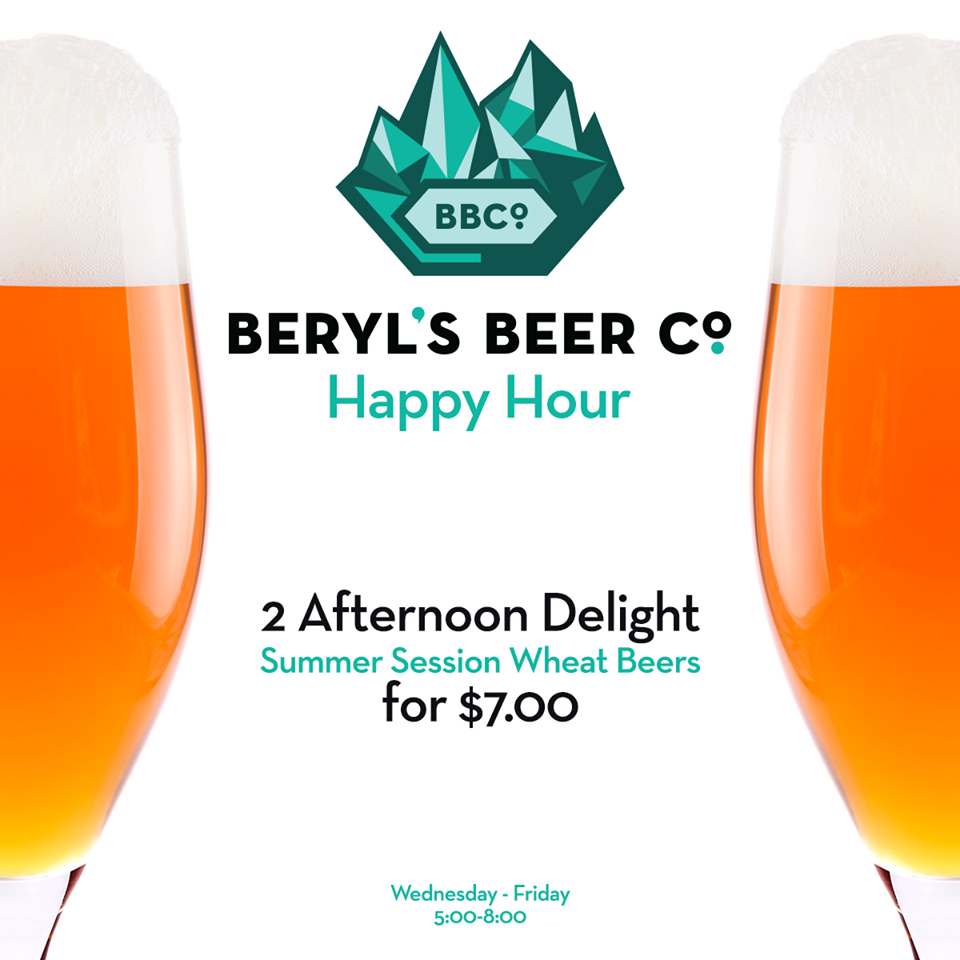 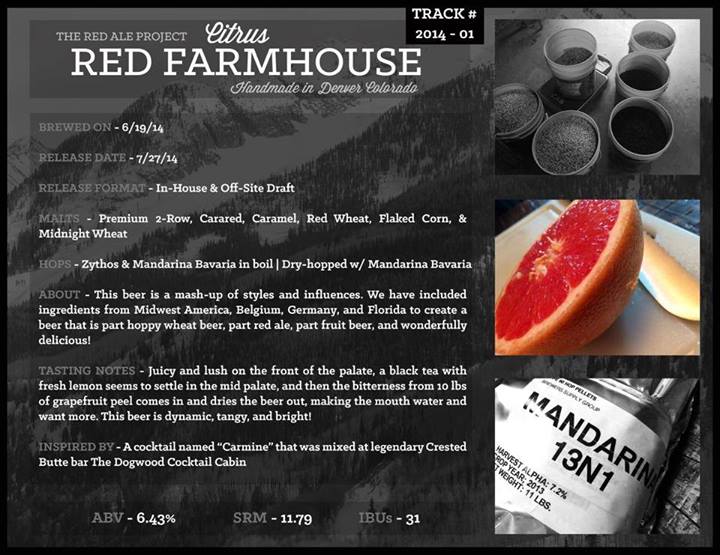 Barley’s Angels Colorado (Boulder) – Attention Ladies – On July 30th, meet at OB Home Made Liquids & Solids in Longmont for a guided trolley tour of the OB Hops & Heifers Farm. Start off with a beer & nacho bar, board the trolley to the hop farm, and then return back to the restaurant for another brew. Sign up for the event and find out more info here.

Bull & Bush Brewery (Glendale) – TICKET REMINDER: Join Bull & Bush on August 8th for their 43rd Anniversary Party with LIVE MUSIC from The Samples!  They love to celebrate their anniversary, and tickets to this event will certainly sell out.  Good news!  You can get your tickets online, without service charges, processing fees, etc. and they’ll even mail ’em to you for free! 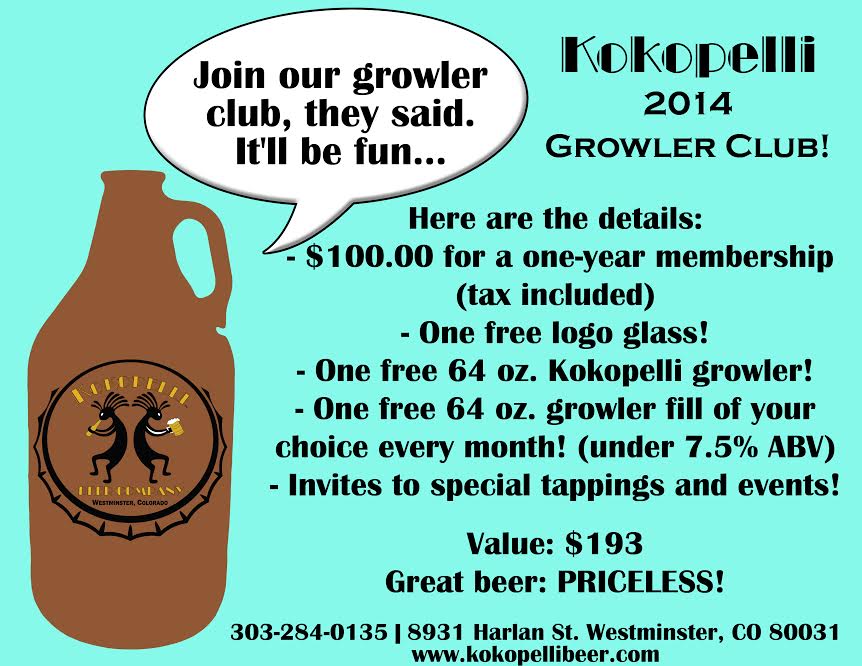 Kokopelli Brewing (Westminster) – Kokopelli just rolled out a growler program. Check out their blog to find out more about this opportunity to take their libations home with you. But for the short and short, for $100 you get a one-year membership (tax included), a logo glass, 64 oz. growler, one free 64 oz. growler fill of your choice every month (under 7.5% ABV)  and invites to special events!

38 State Brewing Co (Littleton) – On August 1, 1876 Colorado joined the Union as the country’s 38th state. On Friday, August 1 at 38 State Brewing, celebrate the Centennial State’s 138th birthday with a Firkin Birthday Party. This Firkin Party will see two brand new brews tapped in honor of 138 – a true to style Porter, as well as a unbelievable Vanilla Porter that is sure to impress even the most savvy beer connoisseurs. The party will include a Cornhole Tourney, Big Brick Jenga, prizes, giveaways, cold brews, and food from The Rolling Italian.

Black Sky Brewery (Baker) – The Black Sky Brewery recently released a new beer.  The beer is their “Denver Black Sky Kolsch” coming in at 4.4% ABV and 22 IBU. They brewed this beer in honor of the returning metal festival they will host at the Gothic Theatre. This year, the fest will be two days, August 2nd and 3rd. Black Sky Brewery still has tickets to the show available at the brewery with no service fees! 2-day regular pass is $50. Bring ears plugs and stay hydrated. RSVP or die! Hails!

Keystone Bluegrass and Beer Festival (Keystone) – Today and tomorrow, Keystone Bluegrass and Beer Festival hosts 30 plus breweries pouring hundreds of beers. Tickets are $10 in advance, $12 at the door. The festival takes place from 1 to 5pm Saturday & Sunday, Aug 2-3 & includes all the beer you can drink as well as performances from more than 14 bluegrass bands. Beer sampling tickets are $40 for a one-day unlimited pass & $75 for a full-weekend, two-day pass.

Left Hand Brewing Co (Longmont) – This Saturday marks the return of one of Left Hand Brewing’s biggest events of the year: LEFTAPALOOZA! Featuring 8 rockin’ tribute bands. Just $10 gets you music all day long from 12pm to 10pm. Enjoy the best of the rock genre from the classic early 60s rock n’ roll all the way to alternative funk. This is a fundraising event to support the Leukemia & Lymphoma Society. Bands will pay tribute to The Police, The Allman Brothers, Stone Temple Pilots, Led Zeppelin, Red Hot Chili Peppers, The B-52s, The Beatles, and The Eagles. Park offsite at Twin Peak Charter Academy. Plenty of food and beer will be available as well. Rain or shine. Tickets at BrownPaperTickets. 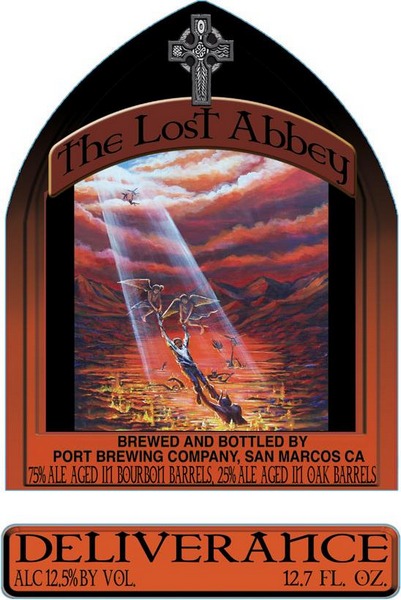 Freshcraft (LoDo/Union Station) – 1pm – This week’s Rare Beer Saturday at Freshcraft is The Lost Abbey Deliverance ale! A blend of bourbon barrel-aged Serpent’s Stout and brandy barrel-aged Angels Share, Deliverance is the epic battle being waged between heaven and hell for the souls of mortal men… and your enjoyment in a glass. See you Saturday!

Horse & Dragon Brewing Co (Ft. Collins) – Looking for a fun outdoor activity this coming weekend? Sign up in the taproom to join H&D on a “Beers Made By Walking” guided tour of the ‎Gardens on Spring Creek in Fort Collins (2145 Centre Ave) this Sunday, August 3rd at 10am. On the tour, learn about edible plants that grow wild (or not) in Colorado. [H&D is sponsoring the tour, so it’s free to you]. Lindsey will also be talking about her inspirations for her in-development Beers Made By Walking recipe. The beer will be tapped along with other Colorado entries at noon on October 3rd at Wynkoop Brewing Co. in Denver just in time for GABF (and will be available in the H&D taproom as well). 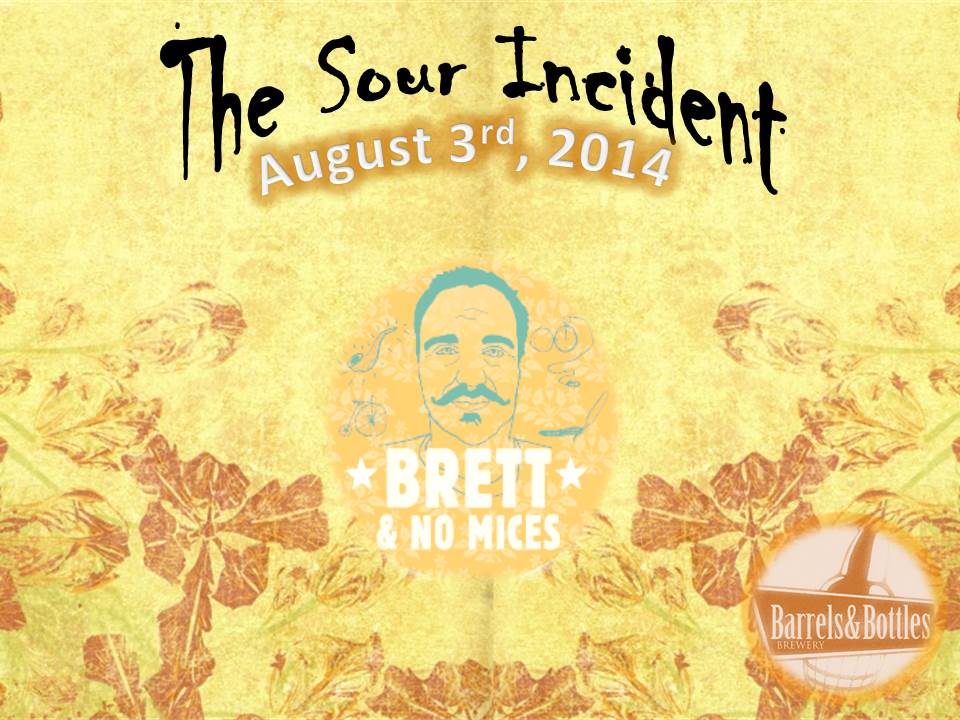 Jagged Mountain Craft Brewery (Five Points) – As part of their non-profit program, Wild Wings Environmental Education will be bringing in some birds of prey (including Sophie the Great Horned Owl, a peregrine falcon, and an American kestrel) into the taproom from 3-7pm on Sunday. Wild Wings hope to help inform and educate everyone about the importance of birds of prey in the ecosystem. $1 from each beer sold that day will be donated to Wild Wings. It’s going to be a great time for a great cause, I’m talon ya!

Post Brewing (Lafayette) – Come join Post Brewing on August 3rd outside under their circus tent in the parking lot for an all you can eat/drink event. 100% of all proceeds & raffle purchases help them send kids with developmental challenges go to summer camp! Their Raffle is $10 per ticket & these prizes are almost unbelievable for the cost, including (not limited to):
Napa Valley & San Francisco Wine Trip for 2
3-Day Whitewater Rafting Trip
2 Tickets on the 50 yrd line to a Broncos game
2 Tix to see Mario Batali’s “Chew”, meet the team & lunch at Mario Batali’s Otto in NYC
All you can eat/drink tickets are $75 and can be purchased at The Post Brewing Co. or on the provided link below.

This is an opportunity for all of us to help out and change some children’s summer. 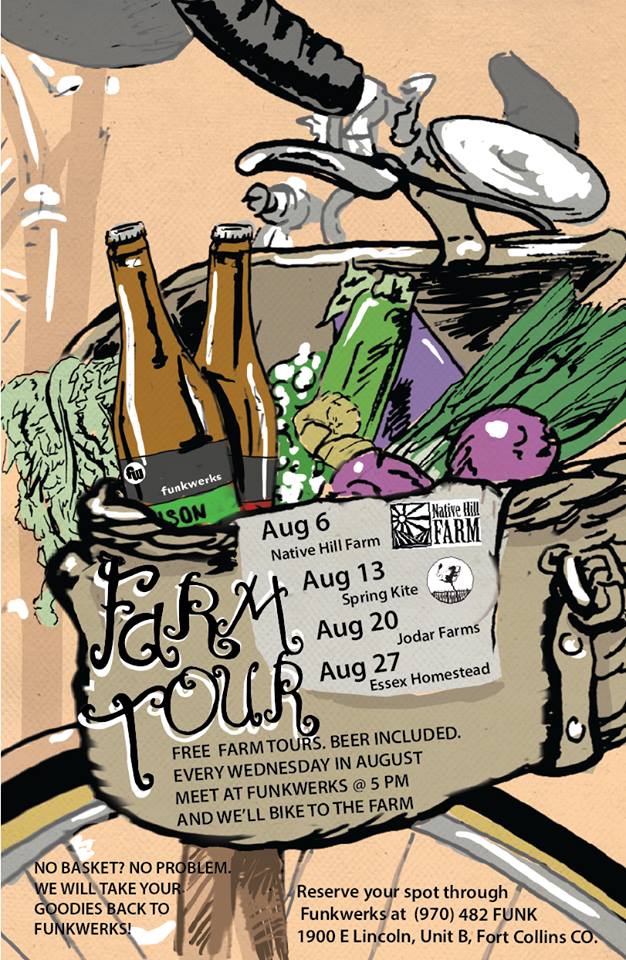 Funkwerks (Ft. Collins) – At Funkwerks for the month of August, Funkwerks will be biking and touring different local farms every Wednesday! They will be visiting Native Hill Farm, Spring Kite Farm, Jodar Farms, and Essex Homestead. Come join them all month long! It is free and beer will be included! RSVP by signing up at Funkwerks 970-482-FUNK. The first tour is tomorrow, so sign up today!!!!!

Barley’s Angels Colorado (Boulder) – On August 5th at 7pm, sign up for Cupcakes and Cold Ones on Sanitas Brewing’s patio and meet the Boulder Bombers roller derby team.This summer event includes your first craft brew, a cupcake pairing by The Whisk Sisters, brewery info, and games of cornhole and bocce on the patio that won Westword’s “2014 Best new Brewery Patio” award. Sign up for the event and find out more info here.

Aug 7th – #IPAday (Nationwide) – It’s back! Coming up next Thursday, August 7th, is the return of IPA Day. Celebrate one of America’s most asked for craft beers! Each year since 2011, #IPAday has been celebrated at bars, breweries, tap houses and restaurants for a wonderful 24 hours of super hoppy beers! When you celebrate #IPAday, be sure to use the hashtag #IPAday whenever you post on social media. Embrace the Hop and dive deep into IPAs that day. Brought to you by @TheBeerWench. Also visit IPADay.org.

Aug 8th – Join Bull & Bush for their 43rd Anniversary Party with LIVE MUSIC from The Samples!  They love to celebrate their anniversary, and tickets to this event will certainly sell out.  Good news!  You can get your tickets online, without service charges, processing fees, etc. and they’ll even mail ’em to you for free!

Aug 9th – Black Bottle Brewery (Ft. Collins) – BOTTLE RELEASE: mark your calendars now for Saturday, August 9th. That’s the day when the BBB will release their American sour ale, “American Graffiti.” This puckerfest weighs in at 7.3% ABV, and is bitter’d with Equinox hops and is loaded with all that funky Brett goodness.

Aug 9th – Pig Roast & BeerAdvocate Social @ Falling Rock – Save the date! We’re finalizing details, but here’s all you need to know to be there: * Pig Roast and * Beer

Aug 9th & 10th – At Denver’s Highlands Masonic Center (Highlands), Fermentation Experts from across Colorado will gather to share their knowledge with the eager ears of attendees at the 2nd Annual Fermentation Festival & Market.  The event will feature unlimited tastings from craft brewers, distillers, sauerkraut makers, Kombucha brewers and much more.  Education is the main goal of the organizers with home fermentation classes offered on every subject from lacto-fermented veggies to how to make sake.  Nowhere else will you find this many fermentation gurus gathered at one event.

Aug 10th – Westminster Brewing Co (Westminster) is planning to host their 1st Annual Car Show at the brewery parking lot on Sunday, August 10th from 12pm to 4pm. If you have a car you’d like to show please register at the brewery or call Dianne Taylor (303) 517-6396 or email pdt[at]westminsterbrewingco.com. Registration is FREE and you’ll get 2 free beers per car entry.

Aug 16th – Hops in the Hangar (Lowry) – From pales to stouts, flights to bombers, Wings Over the Rockies will host some of Colorado’s best breweries in their 1930s Air Force hangar during “Hops in the Hangar” on Saturday, August 16th from 6pm to 10pm. Tickets are available for advance purchase. Ages 21+ only, please. Save $5 when you get your tickets in advance online over the door price.

That’s a wrap for this week’s Denver Beer Beat.  Cheers to ye and may eternity find us in as good company as this! Stay Thirsty and Keep Denver Beer’d!