Phew! That was a whirlwind of a weekend. A couple of openings, Denver Bacon and Beer, and a handful of bottle release. It’s time to start planning for this next week though. No rest for the wicked. Or the thirsty. 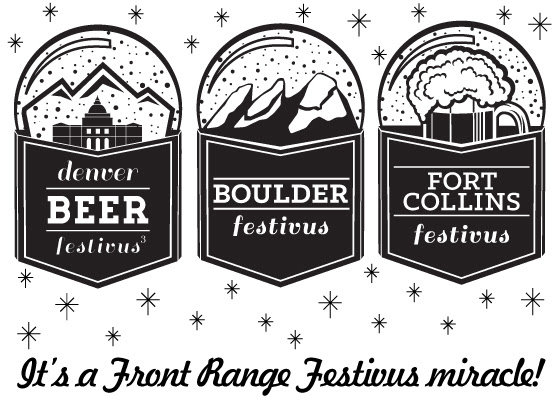 Time and Location: Specific to Each Event

It’s true that Festivus was born in Denver. But Boulder and Fort Collins have their own beer culture, craft drinkers and brewers. Thus, our friends at Imbibe decided it’s time for each city to have its own wintery celebration of local suds. Not quite sure what Festivus is? Navigate to your city via the hyperlinks provided to learn more about this glorious beer festival. And, if you’ve been before, make your way to all three cities for a craft beer extravaganza in each! Denver, Boulder and Fort Collins. 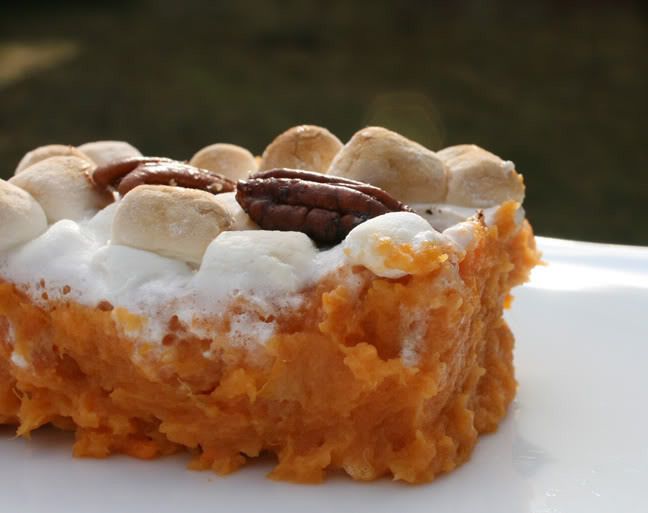 Every Wednesday, they release a fun and interesting one off cask. Join them on Wednesdays to see them release their creative side! November is “Happy Thanksgiving” cask month! How about all the things you love about Thanksgiving in four tasty beers! Up this week is their Sweet Potato Casserole Porter Cask!! This English dark ale has restrained roasty characteristics with a hint of a sweet finish.

For this week’s Wayward Wednesday, RNB have version two of their pilot session farmhouse ale! For this 2nd version, they switched up the malt bill, yielding a darker, maltier beer. First pour is at 3p; swing by and tell them what you think! 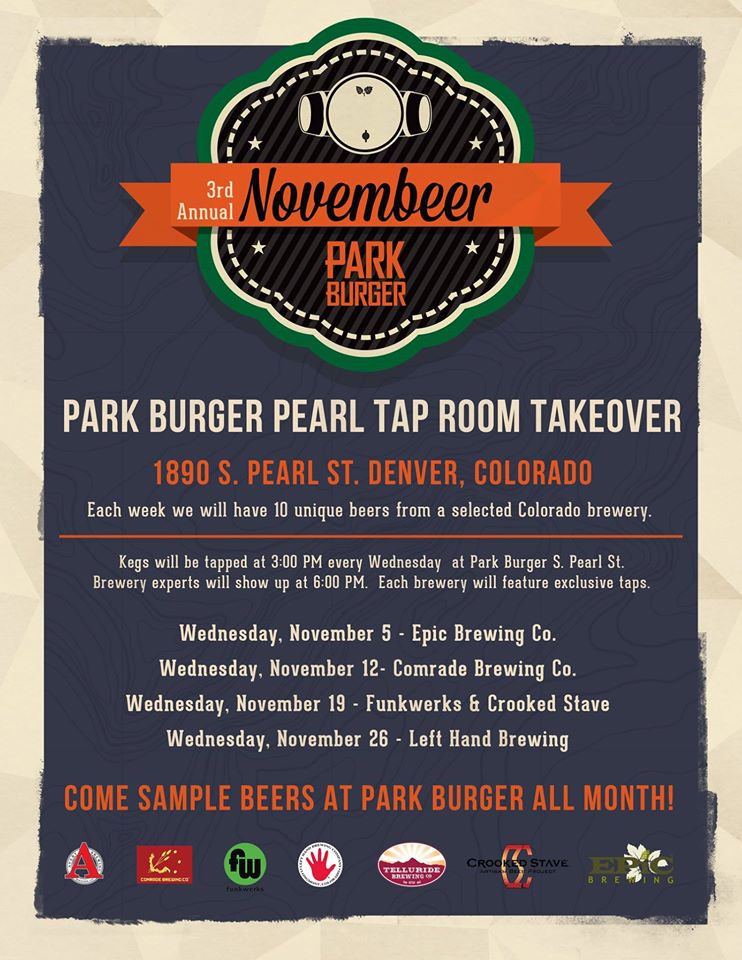 Funkwerks and Crooked Stave Artisan Beer Project brews will be tapped this Wednesday (November 19th) at Park Burger’s 3rd Annual Novembeer and will stay on until next Wednesday when Left Hand Brewing Takes over for the rest of Novembeer. 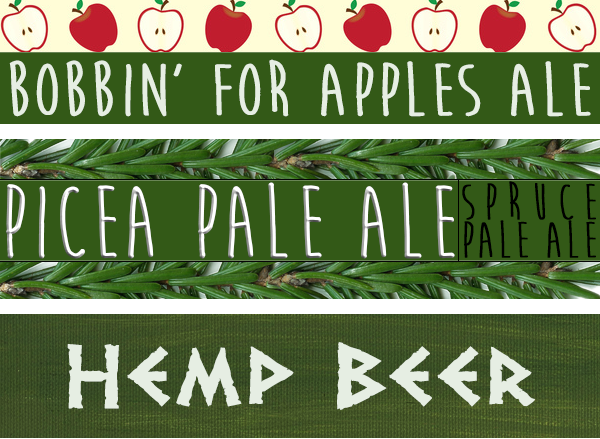 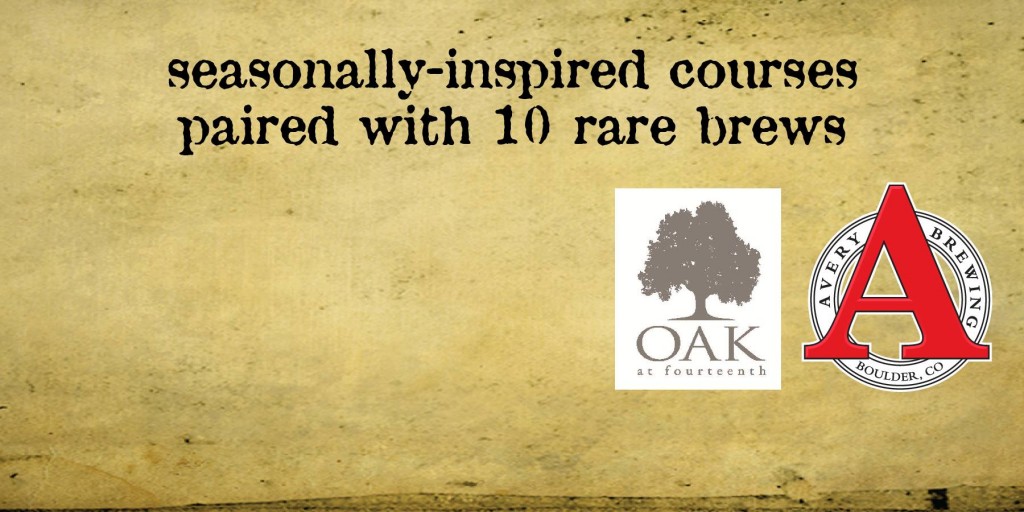 Crooked Stave Artisan Beer Project has an eventful holiday season full of releases planned for barrel-aged sour beer lovers! We already hinted at this yesterday but on Wednesday, November 19th at 6 p.m., Crooked Stave Artisan Beer Project will release bottles of Origins, their burgundy sour ale aged in oak barrels. This will only be the fourth batch of Origins released to date and marks the first in a string of seven unique bottle releases the brewery will host between now and the end of the year.

All of the upcoming releases will take place at the Crooked Stave taproom (3350 Brighton Blvd). The full bottle release schedule for November and December 2014 is as follows: 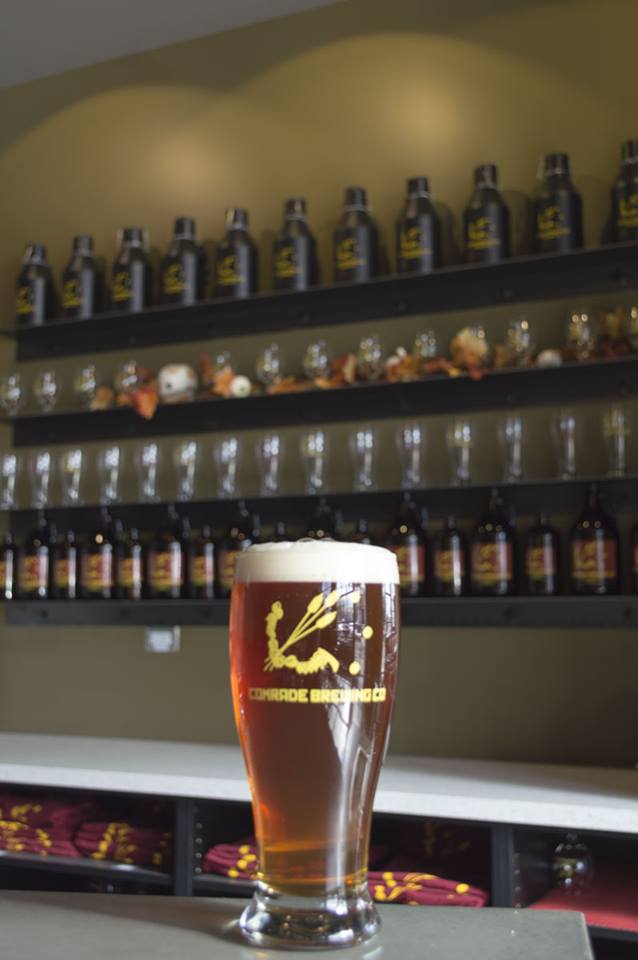 New beer on tap! American Red Ale, brewed with Cascade, Chinook and Galaxy. 7.0% ABV. Stop by and have a pint. Also, their stellar growlers and other merch are begging for you to take them home! 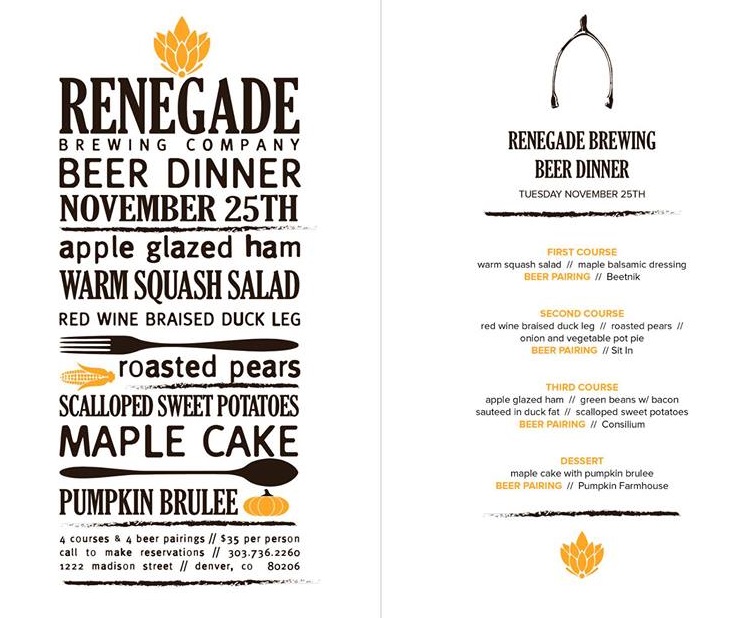 Check it out! One week from today you can attend an amazing beer dinner featuring Renegade Brewing at TAG Burger Bar. They do more than burgers and this menu looks fantastic. Make a reservation today! (303) 736-2260 – A de-constructed pre-Thanksgiving Feast!

Your favorite brewer paired up with your favorite restaurant. What does your ticket get you? Your ticket gets you unlimited access to Beer and Food, a Signature Chef & Brew Belgian Tulip Glass and a portion of ticket sales will be donated to Project Angel Heart. Since 1991, Project Angel Heart has delivered meals to men, women, and children coping with life-threatening illness, free of charge. For a list of brewer and restaurant participants, check out the festival’s website.

Get ready for round two, folks… Upslope is introducing a Wild Saison – Volume 2 of their Lee Hill Series! Be the first to try this one on tap or snag a can for your cellar! Shopey’s Sandwiches food truck will be serving food and live music will be performed by Blake Aaron Russell. 19.2 ounce cans will be available for $10 (limit four per person). 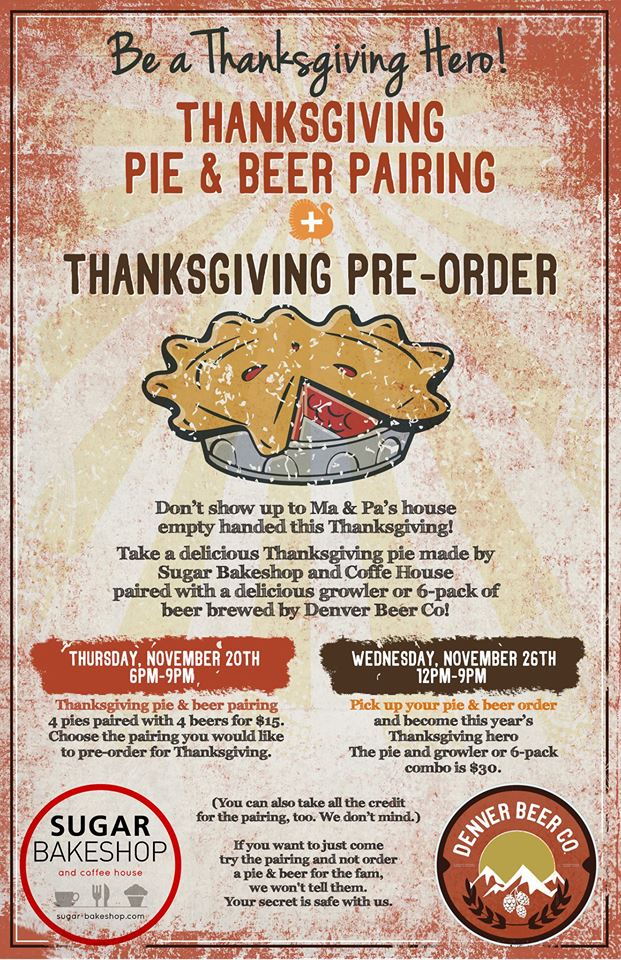 In honor of the upcoming holiday, join in this Thursday, November 20th for a Pie & Beer pairing with Denver Beer Co and Sugar Bakeshop and Coffee House. Try 4 beers paired with 4 different pies. Then pre-order your Thanksgiving pie and beer to be picked up Wednesday, Nov. 26th at the taproom. #gobblegobble 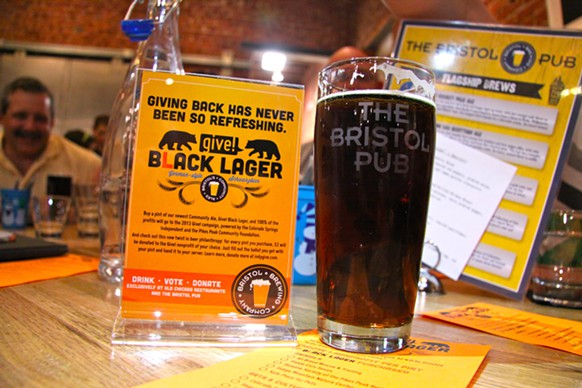 Bristol Brewing Company recenlty announced the return of their Give! Black Lager with a release day of Thursday, November 20. The Community Ale (we know, it’s a lager and not an ale) will join forces with the Give! Campaign to benefit 75 area nonprofits. Bristol will donate 100 percent of the profits from the schwarzbier to the 2014 Give! Campaign.

The release of this Community Ale presents a new twist on beer philanthropy. With every pint of Give! Black Lager customers buy, they will be given a ballot and allowed to vote for their favorite of the 75 nonprofits in this year’s Give! Campaign. Two dollars from the sale of each customer’s pint will be donated to the nonprofit he or she voted for. The Give! Campaign is powered by the Colorado Springs Independent and the Pikes Peak Community Foundation.The beer will be available for a limited time, only on draught, and exclusively at the Bristol Pub and at all four Old Chicago Restaurants in Colorado Springs.For more information on Give!, visit www.IndyGive.com. To learn about Bristol Brewing Company and its brews, go to www.BristolBrewing.com.

***35 + featured breweries with unlimited sampling
***Local chefs serving sample food offerings
***TONS of prizes to give away (what are the holidays without gifts?) 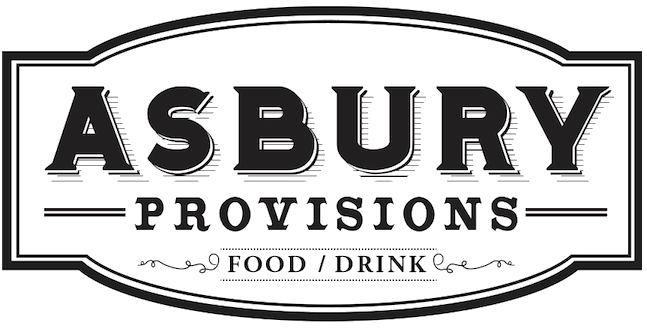 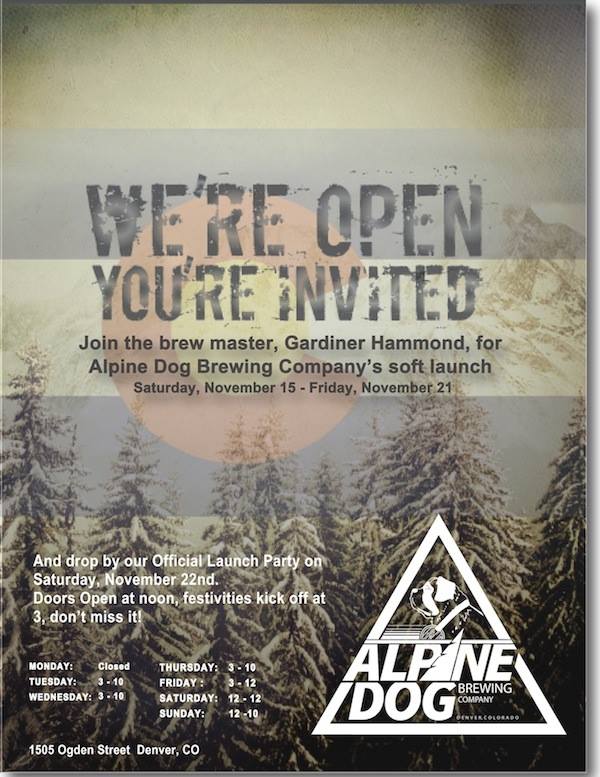 Alpine Dog Brewing Company hosted their Soft Launch on the 15th and has been open all week fine tuning things for their Grand Opening Party on 22nd! Four beers on tap to start; Alpine Dog IPA, Hogback Amber, Rye Blonde, and Belgian/American Hybrid Pale Ale, and more to follow soon! Food by Truck Yeah on the 22nd; sliders, wraps, and the infamous Totchos! (tater tot nachos)! 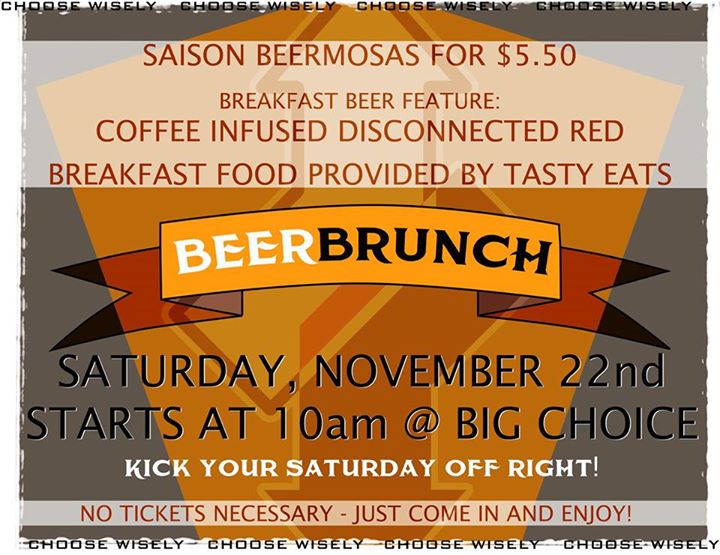 Plans for Saturday? Come out and have BRUNCH with the Big Choice Brewery!! Saison Beermosas, coffee infused Disconnected Red, and Breakfast food for purchase from the Tasty Eats! #choosewisely 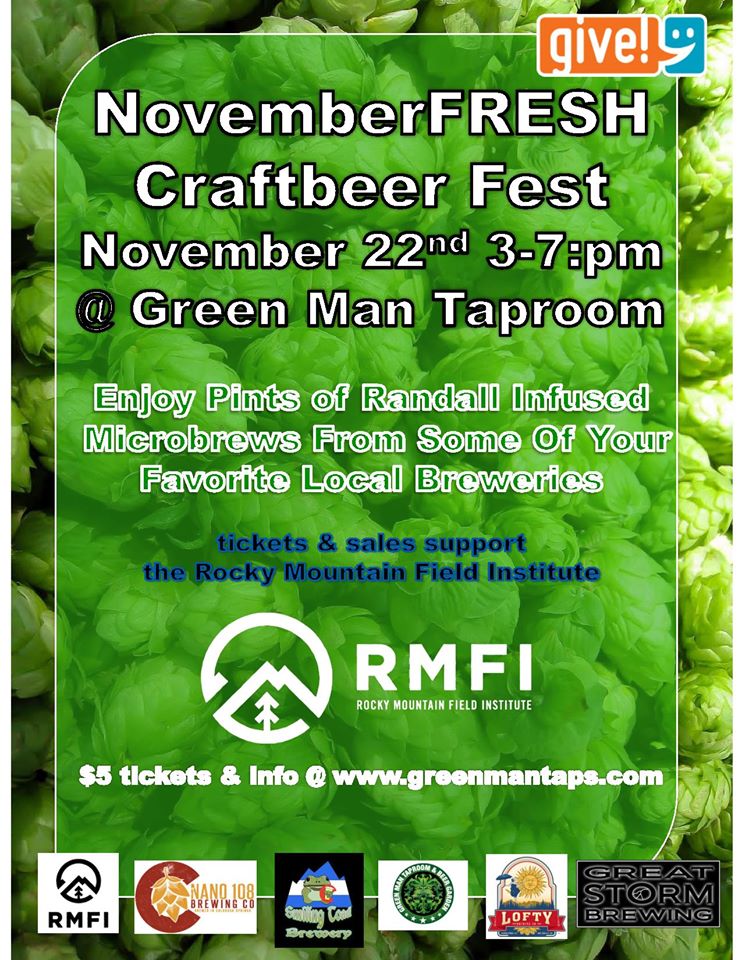 The event, to be hosted by Green Man Taproom on Saturday November 22, will feature local breweries pushing their select brews through randalls containing additional tasty ingredients such as additional hops, vanilla beans, fruits and spices, infusing the beer with interesting new tastes and aromas and creating fresh new craft beers. Ticket and sales from the event will go to the Rocky Mountain Field Institute. The event, to be held at Green Man Taproom, will feature local community-conscious breweries including Nano 108 Brewing Company, Smiling Toad Brewery, Lofty Brewing Company and Great Storm Brewing. For more information and for tickets, log onto www.greenmantaps.com. 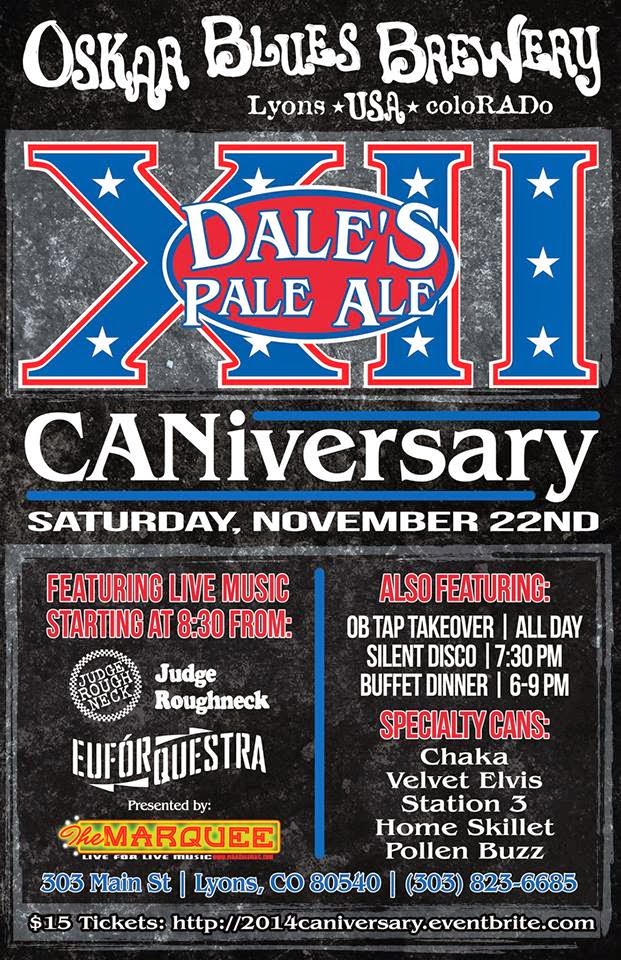 It’s that time of year! The 12th Annual Oskar Blues CANiversary kicks off in Lyons at the original Oskar Blues Grill & Brew on Saturday, November 22nd! Food & beer will be flowing all day with an Oskar Blues Tap Takeover. A special buffet will open at 6:00pm and Silent Disco will rock out (silently) at 7:30pm followed by Judge Roughneck opening for Eufórquestra at 8:30pm! Staying true to their canning roots, their head Lyons brewer will be canning some specialty beers for the event including Pollen Buzz, Station 3, Velvet Elvis & more! Tickets available at: 2014caniversary.eventbrite.com. 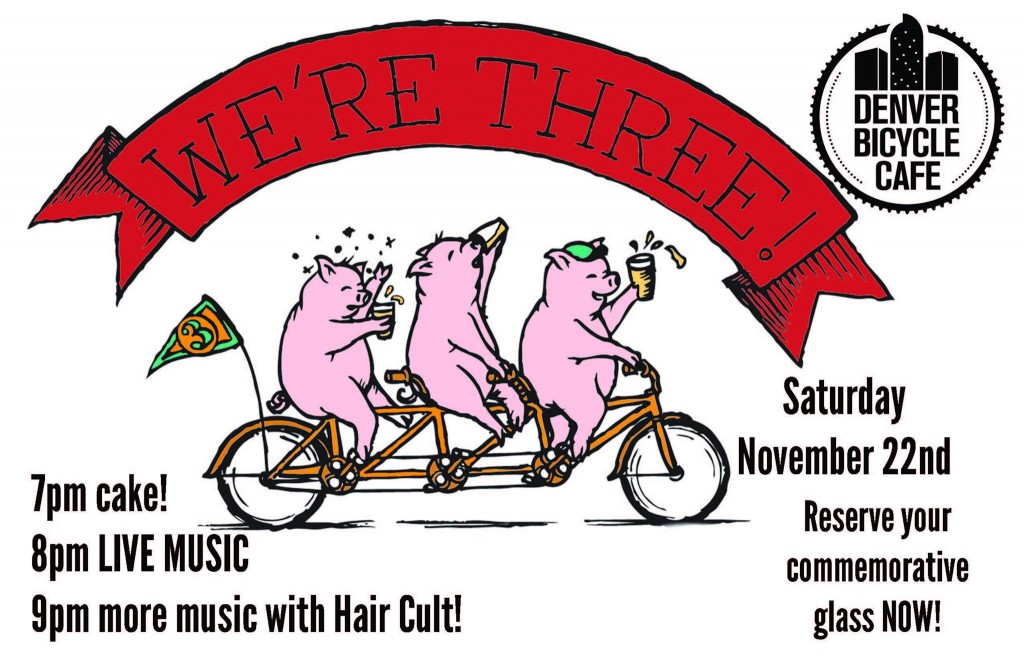 Beer from DBC’s favorite breweries!! Even some very special rare beers!
RESERVE your pint glass in person or at the link below.
$15 gets you a LIMITED edition glass plus 2 beers at the party! 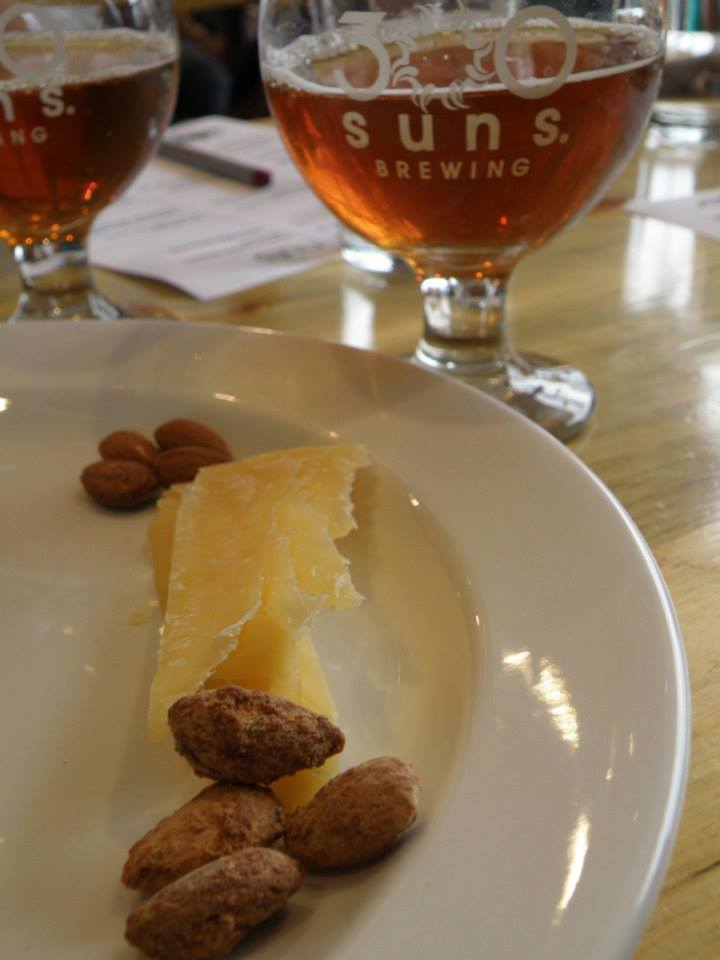 Barley’s Angels teamed up with four professional brewers to create holiday beers. Participation tickets for all brewing sessions were sold out, and the groups planned innovative, seasonal recipes that can be paired with Thanksgiving or Christmas dinner, taken to a holiday party, or just enjoyed with friends.

Now it’s time to taste the results. Angels and their guests (including men) are invited to a special tapping of the brew the Angels made with 300 Suns Brewing’s Mark Lusher. It’s a winter wheat beer with sweet orange peel. Paid tickets to this event are not required; you can purchase a pint or growler of the brew and a food pairing on site at the tapping. The pairing at this event will be cheese from The Cheese Importers.

Ratio Beerworks recently announced plans to open a production brewery and taproom located at 2920 Larimer St. in the Upper Larimer district of the historic Five Points neighborhood. That building may be familiar to Denverites as the old Mile High Spirits building. The brewery is currently under construction in the 5,500 square foot building that will be home to a 1,500 square foot taproom with the remaining 4,000 square feet to be used for production. In addition to the taproom, a 2,000 square foot outdoor patio will be open for the occasional warm Colorado days during the winter months. Future plans to extend the outdoor space will be unveiled when the warmer weather returns to the Front Range. 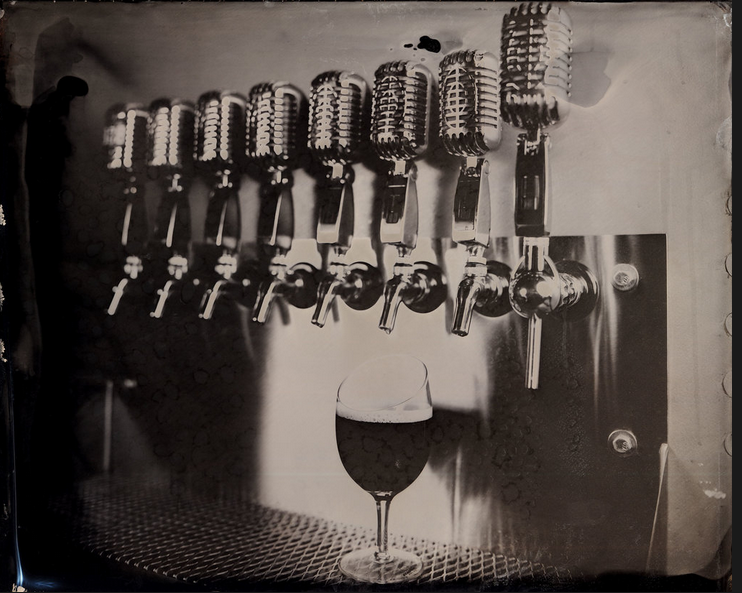 Pints in the Press: Denver Breweries Highlighted by the NY Times @ Your Local Brewery (Denver)

Recently, a handful of your favorite brewers, and mine as well, were showcased in the NY Times in a photo blog post entitled “Modern Beer Culture Through a 19th-Century Lens.” The piece is really moving and makes a great stride in respecting the craft of beer making while capturing our local brewers honing their expertise. Take a look at the post here.

Events That Are Hitting The Tap Wall Soon . . .

Did we miss any events in this week’s Denver Beer Beat? Let us know by emailing us at cory{at}porchdrinking{dot}com.

Welcome to the InterNEAT! Volume 64 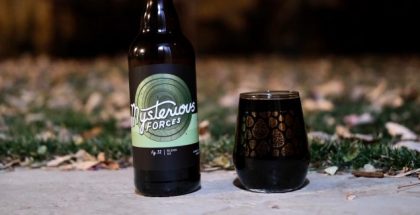