On January 29th, I learned how glorious the combination of bison and Boulder Beer Company could truly be. It was on this night that Tristan and I attended the Bison and Beer dinner at Kachina Grill in Broomfield, CO. When we sat down to eat, we were transported to a Southwestern-themed parallel universe where the bison was literally just taken off of the ranch and the beer flowed like wine. The meat filled, five-course meal led by Executive Chef Jeff Bolton, that ensued was nothing short of fantastic.

The first dish was a sort of appetizer where three different bites were paired with Mojo IPA and a grilled cheese was served as an example of what not to pair with the beer. Chef thought this would be funny, I just thought it was yummy. The Bison Pinxtos with pickled onion, cotija cheese and chipotle aioli stood out among the trio. The spicy chipotle aioli ramped up the flavor on the perfectly understated meat (and also made Tristan sweat uncontrollably), while the pickled onion added a bright, tanginess to the bite. Tristan’s favorite was the Braised Lengua, which showcased a huge burst of flavors associated with tongue, and an event better compliment from the quail egg and cilantro oil. For the beer pairing, Mojo IPA was served with the 4 piece dish and although I usually consider this an extremely bold IPA, it happened to be the most calm addition to the first course. It served as a mellowing constant that brought all the parts together while also helping Tristan to calm his major heat sweats. 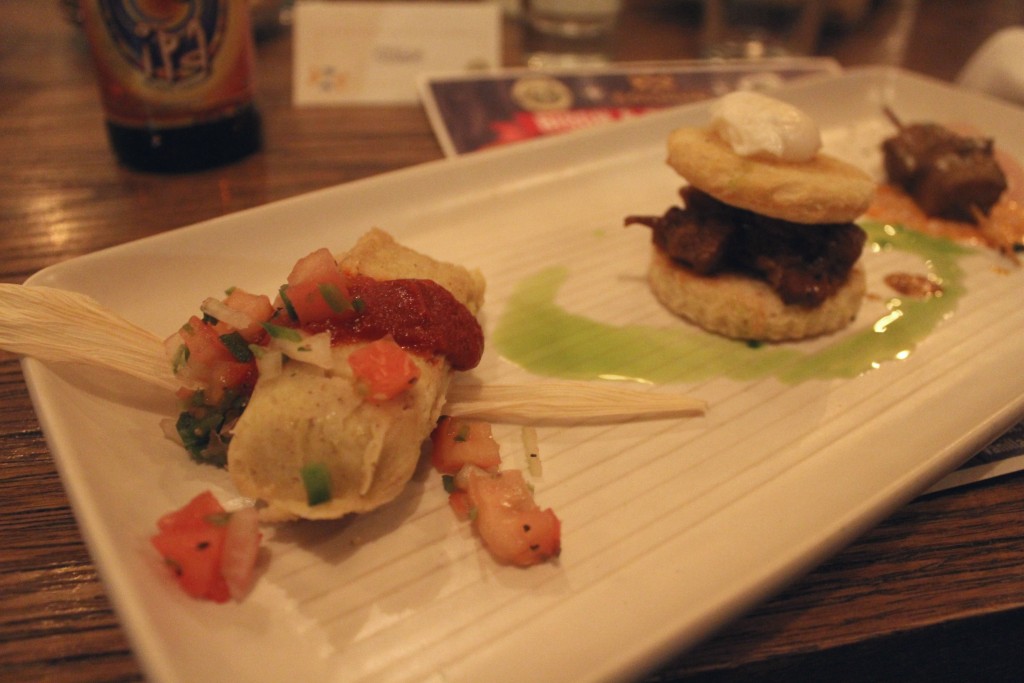 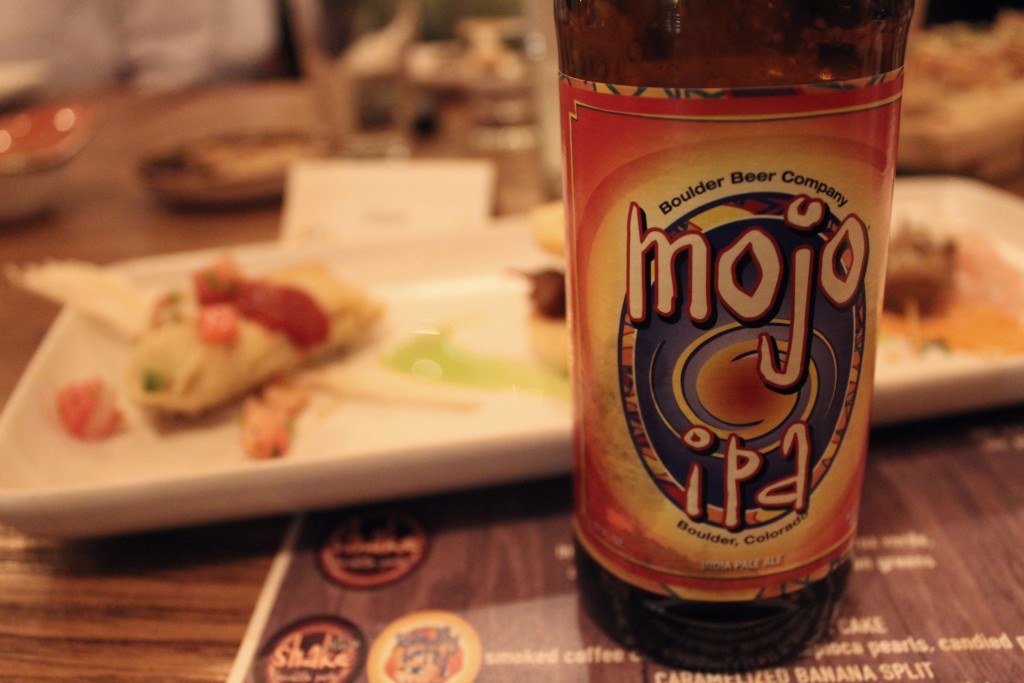 Next up was a baby arugula salad served with bison carpaccio, grilled prawn, toasted hazelnuts, and a pear vinaigrette. Since I’m very frightened of food with eyeballs and green leafy things, I’m going to let Tristan give you his opinion of the salad course:

Tristan- Over the years, I have come to enjoy “rabbit food” as Chelsea described salads, and this course completely knocked it out of the park. The light lime flavors of the prawn played well with the light buttery flavors of the bison carpaccio. When you think of bison, you generally think of heavy, thick bison burgers, but this raw take on bison was extremely refreshing and light. The Singletrack Rye Pale Ale matched the lime flavors of the prawn with a mellowed hop bite and a hint of spiciness drawn from the rye. 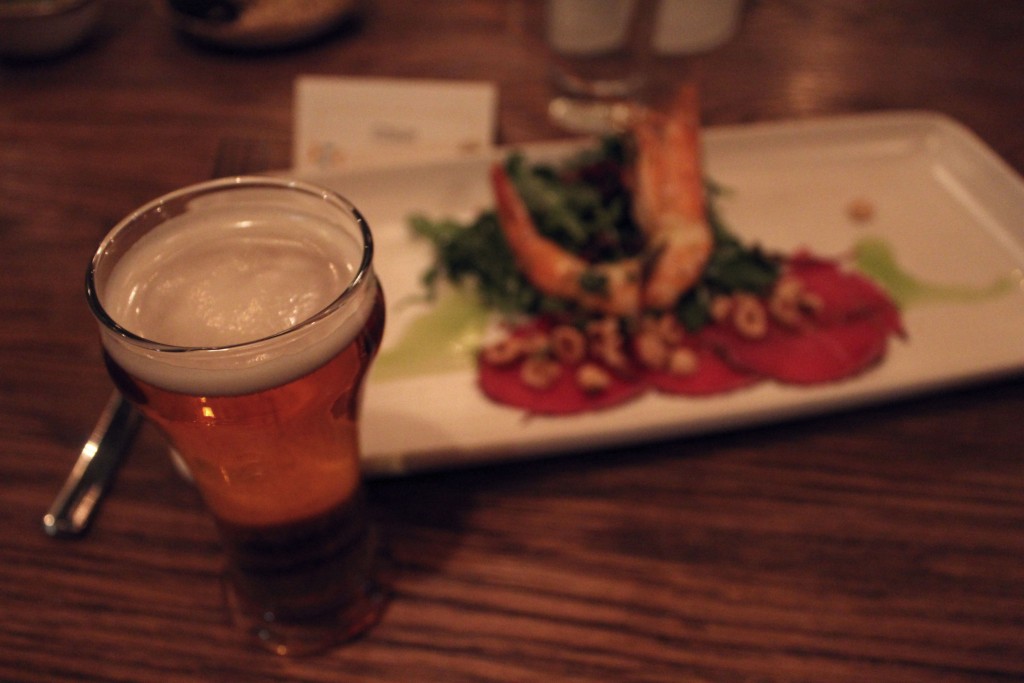 For the third course, the chef did a play on surf and turf. The plate came out stacked with a Vidalia onion potato cake, roasted bison tenderloin, a diver scallop, and kale all topped with a jalapeño hollandaise. I had no choice but to immediately pinch myself to make sure I was still alive. Since I’m a sucker for hollandaise, I knew this dish would be my favorite from the moment I laid eyes on it. The Slope Style Winter Pale that was served along side of it only made things better. With all of those ingredients, the bison could easily be lost but Slope Style highlighted the gaminess of the meat, transforming it into the star of the dish.

Tristan- I could eat this dish for the rest of my life and die a happy camper. I kept going back and forth on which elements I enjoyed more. First it was the smokey rich flavors of the tenderloin then followed by the perfectly seared rich scallop and all washed down by one of my new favorite winter seasonals, Slope Style which showcased piney hop flavors and great overall balance.

The last bison entree was a bison rib eye served atop a bed of bitter chocolate and espresso mole, arroz verde, calabacitas, and garlic seared dandelion greens. My first bite consisted of just the meat and the sauce, with a swig of Shake Chocolate Porter. The spices in the mole combined with the beer turned into a sort of nutty tasting concoction in my mouth. For the second bite, I managed to get some of the rice on my fork with the meat, which made me look at the dish in a completely different way. Any spiciness that appeared quickly melded together with the Shake to create a sweet, savory, and most importantly, chocolately, flavor bomb. 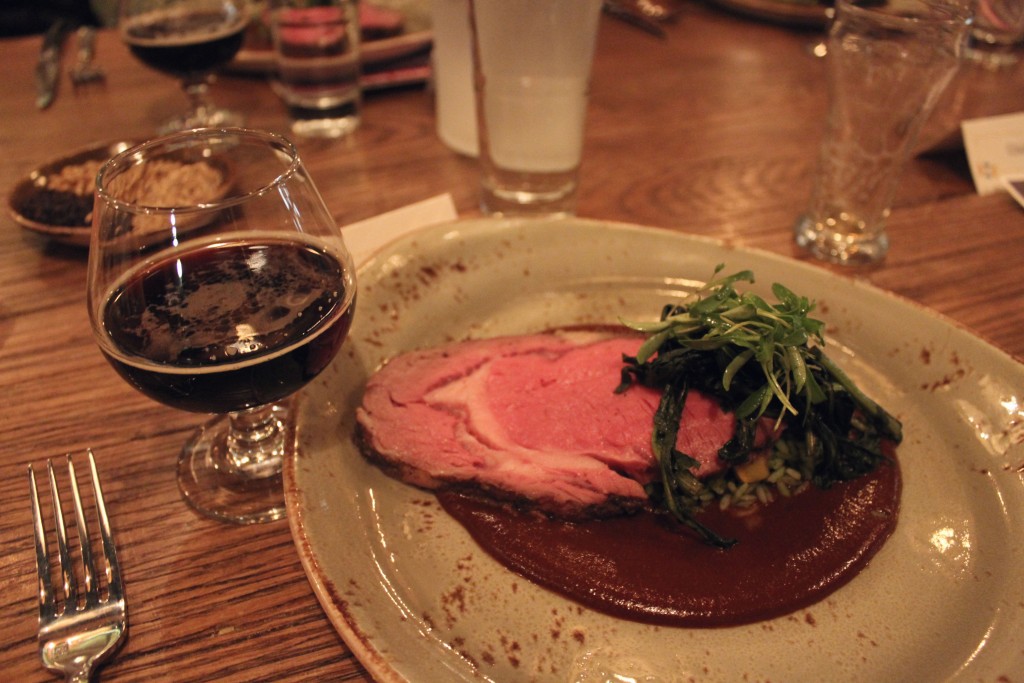 Last but most certainly not least was dessert(s). On one side of the plate was a chocolate cola cake served with a smoked coffee chocolate sauce, tapioca pearls, and candied pepitas. On the other side was a caramelized banana split served with cajeta caramel, abuelita chocolate gelato, and vanilla bean whipped cream. The cake was to be paired with the Shake Nitro and the Banana Split with the Sweaty Betty, but I switched the beers up for a pleasant surprise. The Sweaty Betty brought out notes of cloves in the cola cake, while the Shake Nitro gave it more of that Mexican chocolate kick with roasty notes in the background. For the other half of the dessert, I just wrote, ‘banana split – heaven’ which may or may not help you picture how good this was. It is almost hard to find the words to describe the bursting banana flavors that were leaping around in my mouth. I felt like the rich chocolate gelato served on top of the banana could have easily overtaken the dish, but the Sweaty Betty pairing ensured that all bananas were appreciated to the fullest. 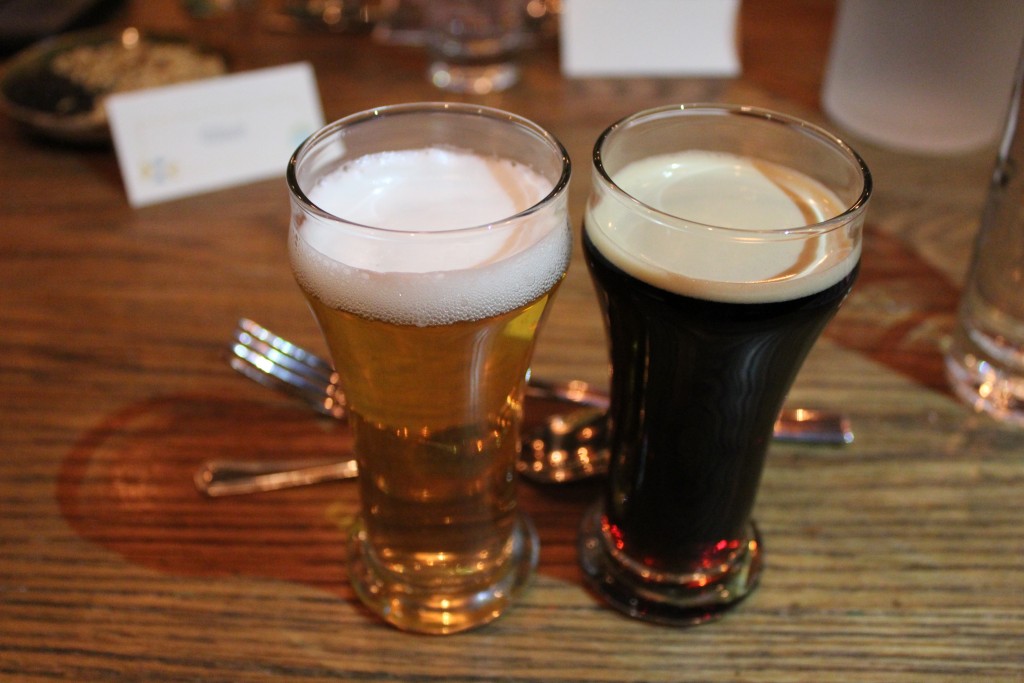 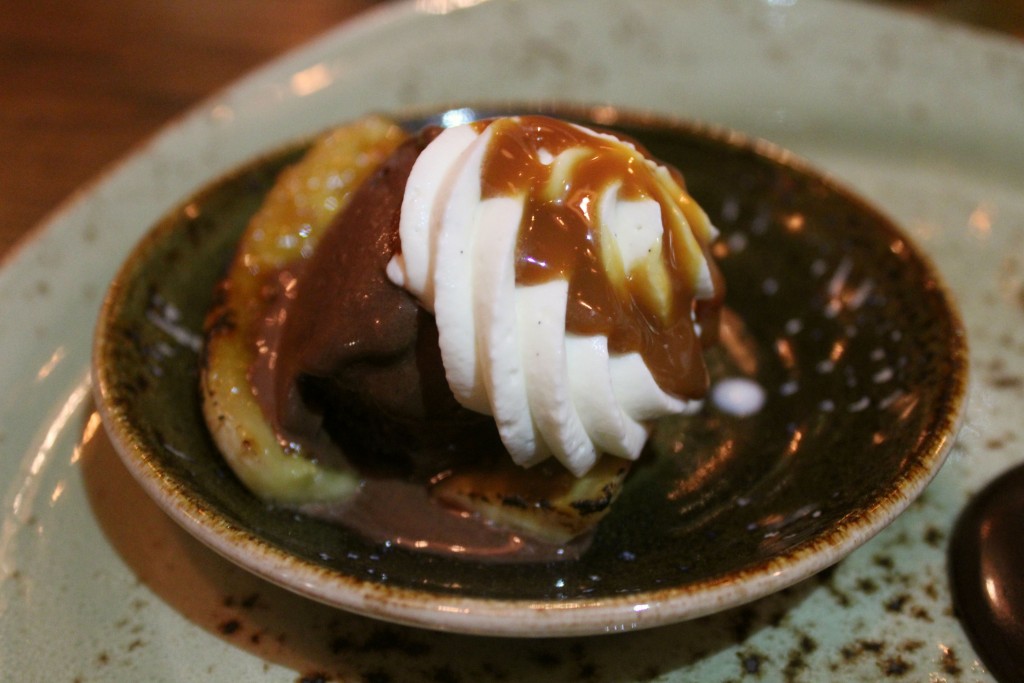 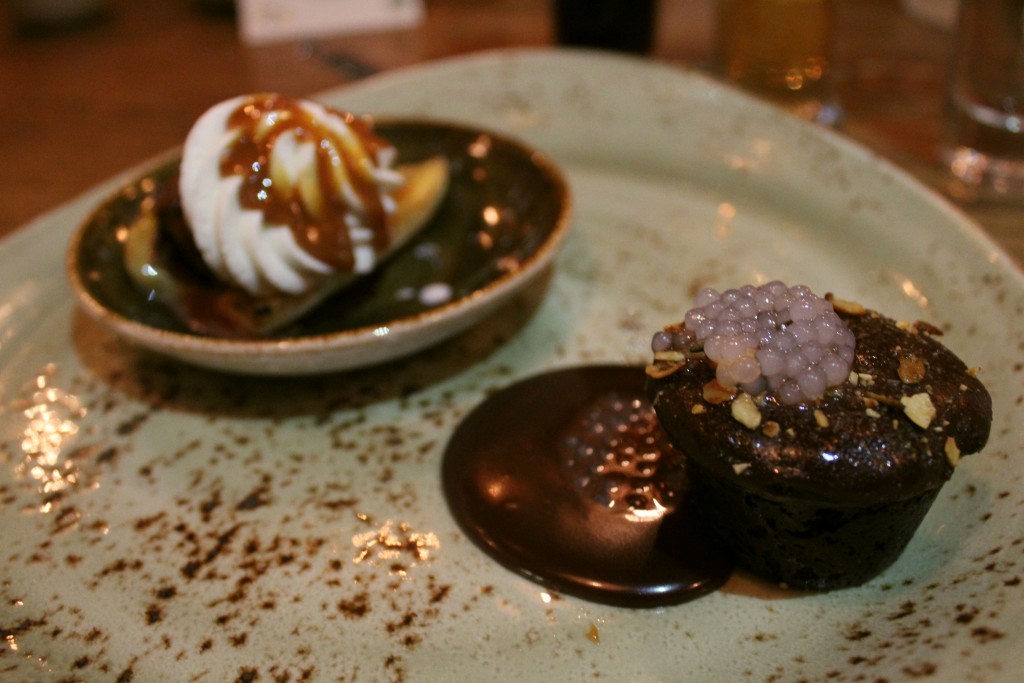 Beer pairing dinners are so fantastic in that they bring out both the best in food and drink, and the Bison and Beer Dinner put on by Kachina Southwestern Grill was the perfect example of that synergy of flavors. Each course was thoughtfully constructed and paired to perfection with Boulder Beer offerings and the bison, the other half the highlight reel, provided by Ray and Debbie Thieman of Prarie Ridge Buffalo Ranch was of the highest calibre in quality, and opened our eyes to what is possible with great bison meat!

Keep on the look out for future Kachina beer themed pairings as they’ve proven that theyve dialed in on a winning recipe! 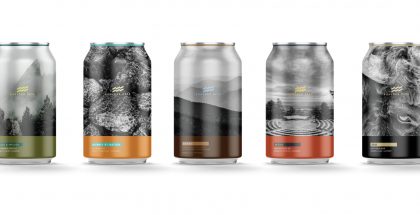