To represent Switzerland as one of PorchDrinking’s 12 Beers of Christmas, I’m not sure there is a more perfect fit than Samichlaus Classic from Schloss Eggenberg. I was told of this brew by a friend back in the States. Upon learning I was going to become a pretend Swiss resident, he told me about Samichlaus. Not the fat guy in a red jumpsuit – more on that later – but the beer. He said something about it being released once a year and having several years’ worth sitting in his cellar awaiting a vertical tasting. Seeing it on the shelf at the local beer store, I wasted no time buying it. But then wasted lots of time staring at it wondering when I should drink this fabled brew. Along came the 12 Days of Christmas article and my problem – when to drink a beer – was solved.

Here in Switzerland, Santa Claus as we know him in America is not the same cuddly, jelly-bellied old man. The tradition goes that Samichlaus – the German name for Santa – pays children a visit on December 6. And not with a sleigh pulled by reindeer but on foot, emerging from his hidden forest cottage with a donkey and his pal Schmutzli (I’m not making this up). If the young ones are good, they receive a boot full of treats. BUT, if the boys and girls are bad, Schmutzli traps them in his sack and kidnaps them. Though I see some benefit to sugarcoating this creepy tale for my kids – receiving coal instead of being KIDNAPPED for bad behavior – I bet children of yore DID. NOT. SCREW. AROUND. when it came to behaving. Now, the Swiss do have a Santa-ish fellow named Christkind that delivers presents Christmas morning, but that’s another story.

Back to the beer. Samichlaus, a dopplebock, is indeed brewed but once a year, also on December 6. From there, it goes into barrels to age for 10 months before the annual release. The label pronounces itself as “The World’s Most Extraordinary Beverage” and the Commercial Description on RateBeer claims, “This beer is perhaps the rarest in the world.” I can’t speak to the rareness but there wasn’t a ton on the shelf I saw and at 14% ABV, extraordinary is an apt descriptor.

Though the beer has Swiss roots, it is technically brewed in Austria by Schloss Eggenberg. They acquired the trademark rights from Swiss brewery Feldschlösschen who had acquired the original Swiss Samichlaus brewers – Hurlimann – in 1997. But Feldschlösschen is a subsidiary of Danish monolith Carlsberg. Confused? Welcome to the Age of Big Beer. I’m sticking with it being Swiss.

On pouring, the head immediately disappears. The color reminds me of cranberry juice and the aroma coming from the bottle and glass is BIG with a sweetness akin to dried figs. Carbonation is quite low and the mouthfeel is smoothly slick like a coat of paint for the inside of your head. It tastes like drinking dried plums and figs dipped in caramel, which sounds cloyingly sweet. It’s not. The sweetness is just right, balanced by a mellow, bread-like creaminess. For such a high alcohol content, there is very little booziness to it.

Recommended pairings include dessert and chocolate along with the suggestion of enjoying Sami as an after dinner drink. Being in Switzerland, where residents consume around 20 POUNDS OF CHOCOLATE annually, I took the dark chocolate approach après dinner. I strongly encourage anyone who drinks this beer to do the same. It’s amazing. 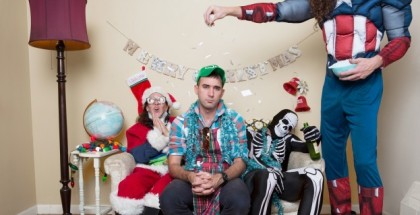 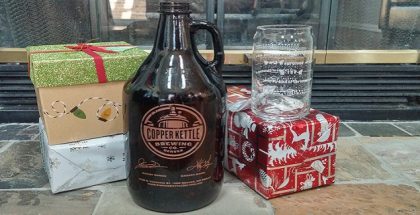