Fortunately, I had the opportunity for some remedial education this past weekend in the form of Lost in the Woods, a sold-out celebration featuring more than a dozen small-batch sour releases against the backdrop of New Belgium’s “foeder forest.” The offerings comprised both rare beers as well as those crafted exclusively for the party.

One such beer was the Chinese 5 Spice Sour. To create it, New Belgium’s master blender Lauren Salazar took a single foeder of dark sour that was aged for 12 months and added an array of spices including galangal root, fennel, Saigon cinnamon, star anise and Szechuan peppercorn. The result, which poured a nice mahogany hue, had a complex nose with notes of green apple and even molasses. The crisp tartness really allowed the peppercorn flavor to shine, though I also picked up some nutmeg or cardamom.

It’s clear that New Belgium, the nation’s fourth-largest craft brewer in the country, takes its role as sour pioneer and innovator seriously.

“It’s a priority because traditional sour beer, to us, is the pinnacle of celebratory beer,” New Belgium Specialty Brand Manager Andrew Emerton said. “We truly do care to elevate the culture of craft beer in America and the time, patience, success, failure, frustration and art that comes from producing barrel-aged sours is simply beautiful.”

Indeed, as the name La Folie (French for “the madness”) suggests, brewing aged sour beers can be a challenging endeavor to say the least. Beyond the time and real estate alone, there’s a strong risk for cross-contamination given the unpredictable and often overpowering nature of wild yeast and acid-producing bacteria.

While the U.S. is undoubtedly behind its European brethren when it comes to the style, American consumers seem to be embracing it. In 2016, 245,000 cases of sour beer were sold—compared with just 45,000 cases in 2015, according to Brewers Association figures cited by Time. That volume was expected to rise by 9 percent last year.

To be clear, not every sour beer on the market is aged—far from it. Many breweries, for the reasons described above, utilize a method known as kettle souring to create a sour-tasting beer more quickly and with a minimized risk of cross-contamination.

Because it apparently wasn’t enough to provide an array of limited, labor-intensive beers, Lost in the Woods saw New Belgium’s wood cellar transformed into a kind of psychedelic underwater wonderland. Dubbed “Life at the Bottom,” the fete’s theme inspired all manner of sea-creature garb, with at least one brewery employee sporting a large shark head.

Speaking of singular creations, I have to mention the Nitro Oscar Worthy Coffee. As you might expect from the name, it’s an aged version of New Belgium’s base sour brown beer (called Oscar) with coffee served on nitro. The bitterness of the coffee—added after primary fermentation—played well with the sour flavors, reminding me of cheesecake. 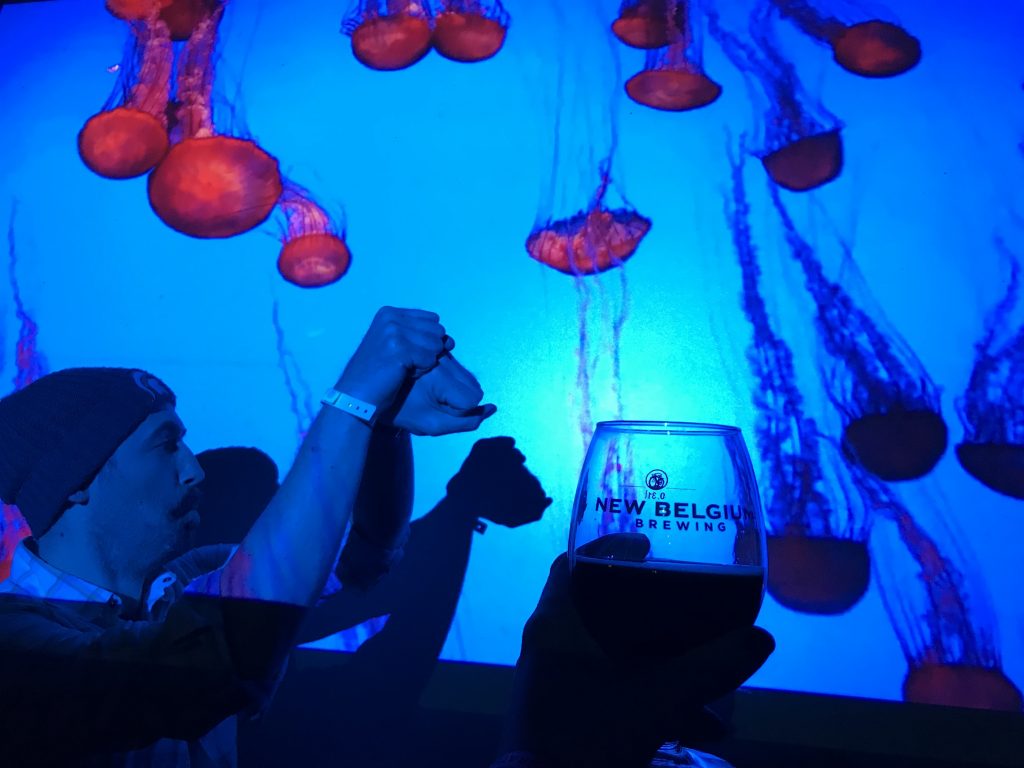 Le Terroir is another one of the brewery’s flagships, the base of which is a golden sour (called Felix). Lost in the Woods featured a version of Le Terroir dry-hopped with Amarillo as well as Night Terroir, made of Oscar and similarly dry-hopped. Other standouts I tried were the Sour Saison, Passionfruit Saison and Single Foeder Felix #61.

While each creation was distinct, I experienced a similar sensation when tasting many of them: an initial mouth-puckering tartness followed by the beer sitting in the middle of the tongue, tingling as I detected various flavors. That experience alone made it unlike any other beer tasting I’ve been to.

Of course, not all beer drinkers delight in the taste of a sour (my plus one included), but part of the problem might rest in how the style is marketed to consumers.

“’Sour beer’ is really an awful term for a style and it’s causing a lot of confusion,” Emerton said. “It’s our responsibility to educate the service industry on the many nuances of wild ales.”

Asked about New Belgium’s priorities for its sour program going forward, he added: “I’d personally like to see how far we can blur the lines of the wine world.”