Cleveland’s Great Lakes Brewing Company (GLBC) has an affinity for beers that also tell a story, be it history, weather or paying homage to its local, Cleveland sports scene. For instance, GLBC released its Rally Drum Red Ale brewed in honor of the well-known Cleveland Indian bleacher-seat drummer, John J. Adams. Come September, Cleveland fans can sip on 73 Kolsch, brewed with Cleveland Browns hero Joe Thomas, an offensive linemen who played in an amazing 10,363 consecutive snaps during his 11-year career. Hence, GLBC describes the Kolsch-style beer as “A Brew Fit For An Iron Man.”

The following is a press release provided to PorchDrinking.com by GLBC.

Great Lakes Brewing Co. (GLBC) announces the creation of 73, a limited edition Kolsch-Style Ale brewed in collaboration with Cleveland football hero Joe Thomas. The light, crisp, tailgate worthy beer named for the left tackle’s uniform number will be available in cans and on draft throughout the Cleveland area beginning in September, 2018.

The project developed organically when Thomas bonded over beer with his next door neighbor, GLBC CEO Bill Boor. “Joe and I talked about the idea of doing a beer together for a while. He embodies so many things we admire at Great Lakes, and in Cleveland,” said Boor. “Reliability, hard work, loyalty, community involvement. The list goes on. After he retired, we agreed to make it happen. It seems so right for Joe Thomas and Great Lakes to work together on a special beer.”

Thomas visited the brewery in June to collaborate on a test batch of 73 Kolsch with GLBC’s brewers. “I love craft beer, and throughout my career in Cleveland I had the opportunity to enjoy some of the best from Great Lakes. I had 11 pro seasons in Cleveland and they’ve had 30, so we’re a good, seasoned match. It’s been so much fun going through the entire process from design through brewing the first batch at the pub,” said Thomas.

73 is a light Kolsch-style ale brewed with rye for a crisp, dry finish. “It’s an easy drinking beer, but it’s got some complexity to it,” said GLBC Pub Brewer Steve Forman. “Prior to our test batch, Joe tasted some beers with Bill, our Brewmaster Mark Hunger, and me so we could design this beer together. It was great having him back to brew the first batch in our 7 barrel pub system. He even tossed some hops into the boil and raked out some spent grain on brew day.”

73 Kolsch will be available for a limited time at select Cleveland area retailers beginning this September, in 12 oz. can 6-packs packaged in Cleveland by Iron Heart Canning Co. 73 cans feature an illustration of Joe Thomas by GLBC’s own designer Jameson Campbell and references to Thomas’ career accomplishments, including his 10,363 consecutive snaps record. 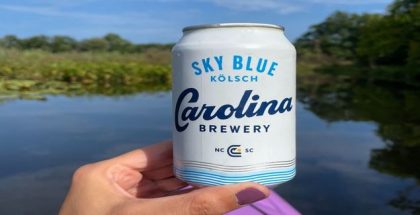