Starting off the year by attending a beer festival is the best way for any beer enthusiast to set themselves up for success. The idea of unlimited beer sampling from a stellar brewery, along with over 50 local and regional breweries is heavenly. Add that with a solid time with friends enjoying food and music and you have the Maple Bacon Coffee Porter Festival at Funky Buddha Brewery.

Maple Bacon Coffee Porter sounds like a mouth full right? Well so is the beer! Highly regarded in the beer world for many of their pastry-inspired beers and a Gold Medal winner in the 2016 World Beer Cup for Specialty Beer, Funky Buddha Brewing comes through to begin the new year in Oakland Park, Florida with an extremely fun beer festival for anyone 21 and up to attend.

They named this festival after the Maple Bacon Coffee Porter to celebrate its yearly release. The Maple Bacon Coffee Porter Festival invites over 50 different breweries near and far. Many qualities of this festival raise popularity and excitement every year. One of those qualities is the tap list that features the guest breweries that embrace the breakfast style beer theme or any other style they choose.

How was a beer as interesting and flavorful as Maple Bacon Coffee Porter created? Kristen Lorow, the brand marketing coordinator at Funky Buddha shared the story of this epic beer and festival to follow.

PD: How did MBCP come about and why did it become a main focus?

Kristen: When Funky Buddha first started back in 2007 we were located in a tiny hookah lounge in Boca Raton and brewing on a small system. (Basically, the size of a large kitchen pot.)

Ryan has a super creative pallet and was creating a lot of these unique and culinary inspired beers. He created an orange creamsicle wheat, a mango habanero blonde ale, and eventually created Maple Bacon Coffee Porter. Ryan wanted to recreate beer that was reminiscent of a diner-style breakfast in a glass, with flavors and aromas of roasted coffee, maple syrup-soaked pancakes and smoky bacon. He bottled this beer and sold it to a few of his regulars, who sold and traded for this beer all over the world-one bottle went as far as Denmark, and another sold on Ebay for over $300!

Within a few weeks Maple Bacon Coffee Porter was rated the #1 rated porter in the world on Ratebeer.com. Soon after, we began receiving invitations to these really exclusive beer festivals and people were so excited to taste our beer they would sprint from the entrance to get in our line-which was consistently one of the longest and wrapping around the building.  Funky Buddha has been growing like crazy ever since. When we moved to our production facility in Oakland Park we wanted to pay homage to the beer that put us on the map and throw a festival in it’s honor.

The festival has evolved and has seen many different formats throughout the years. The first few MBCP fests were open to the public however, the crowds increased exponentially each year so we decided to move it to a ticketed event to make it a little more manageable. The festival has always been a celebration of out of the box, culinary inspired beers.

When inviting the other breweries, are they encouraged to bring breakfast-inspired beers?

Kristen: We do not request for the breweries to bring breakfast inspired beers, however, guest breweries tend to embrace the theme.

Have you personally seen growth in the festival throughout the years and how does it feel to be a part of that growth?

Kristen: The first year Funky Buddha held MBCP fest I was blown away. For starters, there weren’t any other breweries near us where you could go and drink at the source, but there was also not nearly as many beer festivals, so getting to try so many different beers in one setting was such a unique experience.

Although now, I work the festival rather than attending it’s still a really fun day and it’s amazing to see how many guests come from all over to celebrate with us. The festival has grown in size and attendance throughout the years, and we’re always looking for new and innovative ways to make it better. 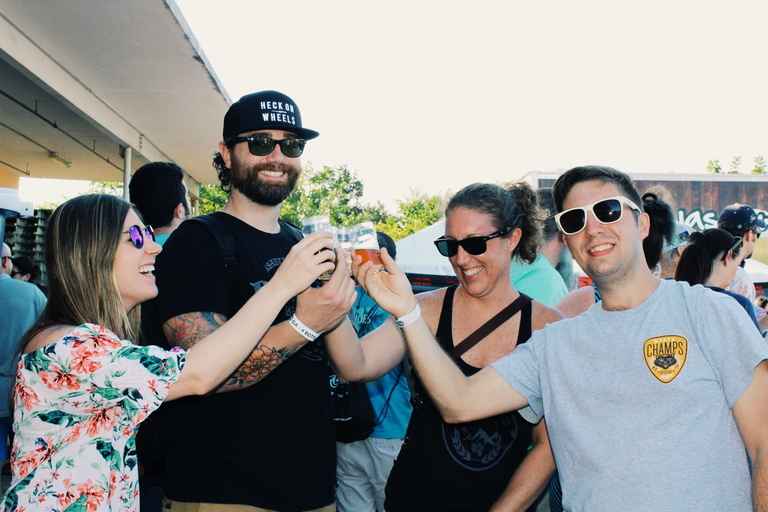 Funky Buddha brewery allows this festival to showcase their 2019 Maple Bacon Coffee Porter; afterall, they named the festival after it! There is something to be said about a beer that brings so many loyal craft beer fans together. The innovative brewery also has a trailer of their other beers for everyone to enjoy as well. That’s right! An actual trailer that has Funky Buddha’s MBCP and its variants, barrel-aged, specialty, and last but not least, core beers.

With a plethora of beers and four hours to try them all, I would say that VIP to the MBCP festival is well worth it. VIP attendees do get an extra hour of time before general admission begins. I still managed to put my taster cup to work by trying tons of brews. Looking for the standout beers was tough because they all sounded intriguing; however a few managed to create decent sized lines of people anxiously waiting to try.

Pontoon Brewing out of Atlanta, Georgia had one of those lines that made you double look because it was so long. That comes at no surprise when they were pouring beers like their decadent Berliner, an Imperial Stout with delicious maple flavors, a Barrel-Aged Imperial Stout aged in Apple Brandy, and a triple New England IPA that had over 800 pounds of pineapple, vanilla and milk sugar. So, if these beers sound like they were worth the wait, they definitely were!

The chance to try beer from breweries I don’t usually have access to is incredible. The MBCP festival presented the opportunity for us Floridians to get a taste of what Vermont has to pour. Four Quarters had a wonderful lineup of beer that I kept lining up for one after the other. They poured two sour ales, an imperial stout, and a DIPA that sparkled- literally!

How else did people get funky that day you ask? Well the DJ had no problem getting the crowd to show their moves. Needless to say, things became intense when bacon and hot dogs became involved.

“When all else fails, there is music. When that fails you, there is beer.” – James Hauenstein

MBCP festival has a relaxing, laid back vibe. For the locals, it is always a fun surprise to see what your favorite brewery will bring to the table. Mathews Brewery in Lake Worth was happy to pour a taster of their Belgian Tripel Ale and New England style double vanilla milkshake IPA. I can see their enthusiasm for craft beer; I also found their passion for music is shared at their brewery, with frequent concerts that attract many people.

JDub’s Brewing Company in Sarasota had an incredible lineup of a blood orange Berliner and a macaroon imperial stout with a future lineup of awesome bands that would help celebrate their five year anniversary this March. It is great to hear news like this from the different breweries at the festival; Funky Buddha did an awesome job at selecting them. 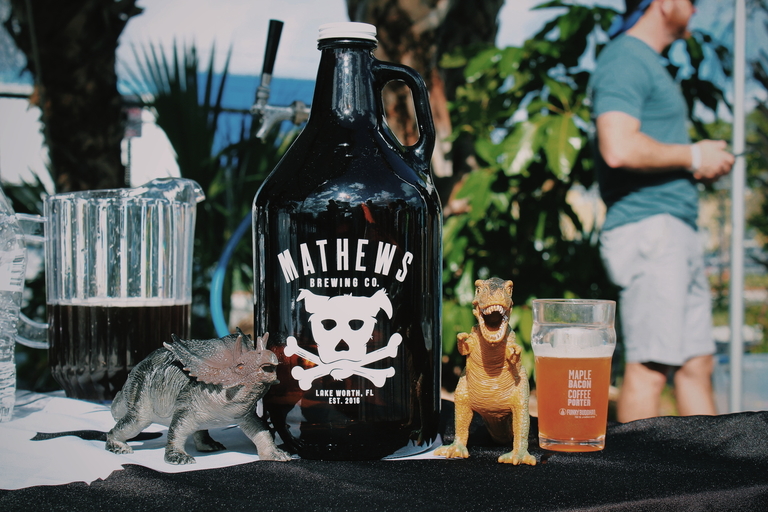 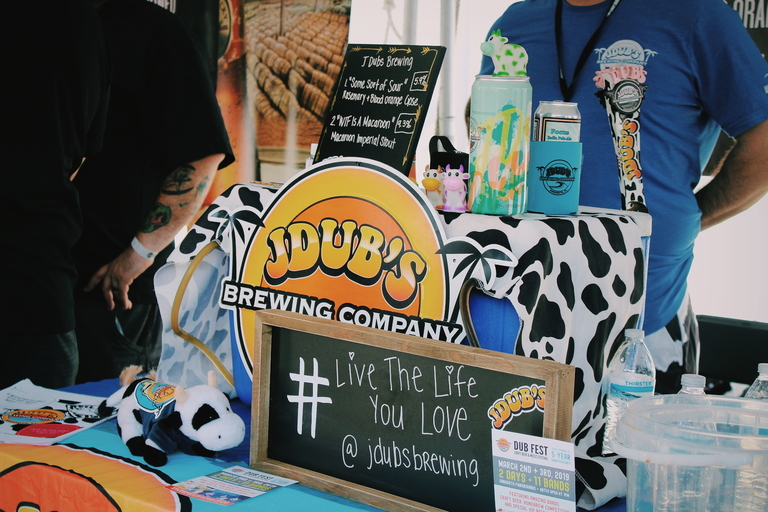 I thoroughly enjoyed all of the beers I was able to try; however the most excitement was for the infamous beer everyone came for. This year, Funky Buddha brewed an exceptional porter that left us speechless. This bottle release was the type of release that no matter how many you purchased, you would say to yourself, “I should have got more.” Fortunately, bottles are distributed throughout the state until they are sold out.

This 6.4% ABV Porter pours a deep black with expressive coffee they brew locally. You will get your breakfast fix in this beer; there’s a subtle bacon smoke that meets a distinct, rich syrup flavor. Needless to say, Maple Bacon Coffee Porter is easy on the palate. So, get ready to immerse yourself in the creamy layers of breakfast heaven. 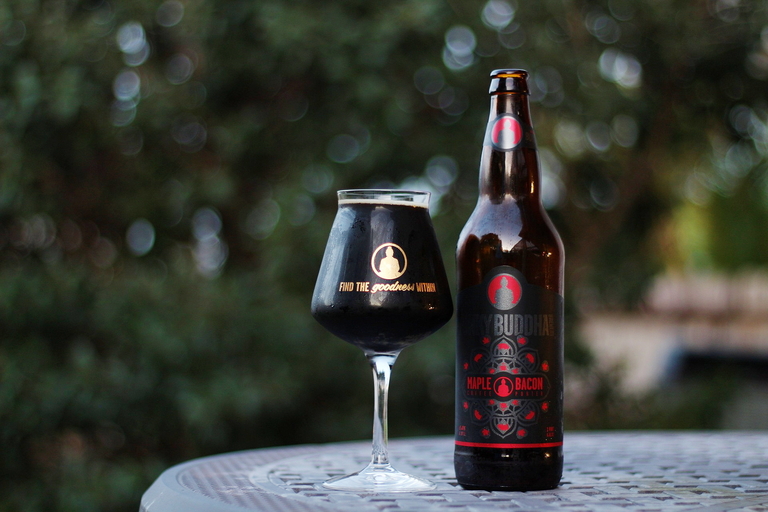 If you are in Florida, the MBCP festival is definitely worth checking out! The town of Oakland Park has truly embraced Funky Buddha; and that shows in the ease of the event from start to finish. Nearby parking, ride share accessibility, and local law enforcement makes getting in and out of the event stress free. If you can’t make it to the festival, join Funky Buddha any other time in their tap room. Also be sure to enjoy the unique beers they pour as well as their craft kitchen; it’s conveniently located in the brewery to get your food fix too.