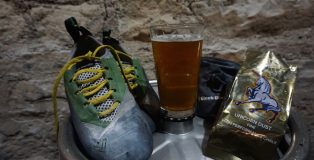 Similar to writers, who most often draw inspiration from their own surroundings, it’s not surprising to find that brewers often draw inspiration from their own passions as well. However, when those passions center around rock climbing, one would assume that any crossover might only extend to post-workout beers. That said, Wynkoop Brewing has never shied away from brewing with unorthodox ingredients, gaining acclaim for successfully brewing a beer with Rocky Mountain Oysters. So it shouldn’t be too surprising that Wynkoop would be the ones to brew a beer with rock climbing chalk.