It’s almost October. Why is it so damn hot outside? I’m usually a lover of spring and fall, so this unseasonable warmth has to stop. Instead of enjoying Porters and Brown Ales outside, I’m drinking Session IPAs and Pilsners in the air conditioning like some kind of animal! When will the insanity end?! In an attempt to stay cool and kill time while autumn drags its feet, I prepared a special double-issue for you to enjoy. Fire up the AC, pack yourself in ice and get ready to see What We’re Drinking.
END_OF_DOCUMENT_TOKEN_TO_BE_REPLACED

Labor Day has come and gone, and summer has gone with it. We now find ourselves taking our kids to school, choosing hot coffee over iced and watching terrified as another hurricane hurtles towards us. This hasn’t completely dampened our spirits, though, because we have something wonderful and uplifting. We have something that will lift us up and keep morale from plummeting too far. Don’t tell anyone, but our secret is beer. This is What We’re Drinking.
END_OF_DOCUMENT_TOKEN_TO_BE_REPLACED

Thanksgiving is a notoriously big drinking holiday. Whether you’re attending “Thanksgiving Eve” festivities at the local dive bar or trying to ignore the inappropriate rants of an older family member, beer can become a wonderful coping mechanism. The PorchDrinking staff is no different. Get a legal pad and prepare to take some notes. This is What We’re Drinking.

END_OF_DOCUMENT_TOKEN_TO_BE_REPLACED 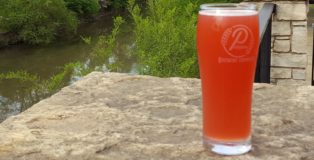 Pollyanna Brewing’s rapid success is almost unfathomable until you try the beer — and then it makes perfect sense. Just shy of two years old, Pollyanna Brewing is already expanding its production, selling its beer at Cellular Field (home of the White Sox), and the taproom is frequently packed. It took Pollyanna only a year to create a beer that exceeded the popularity of its original, and already popular, creations — Summerly, a raspberry wheat beer. The refreshing summer treat is not only delicious, it speaks volumes about Pollyanna.
END_OF_DOCUMENT_TOKEN_TO_BE_REPLACED