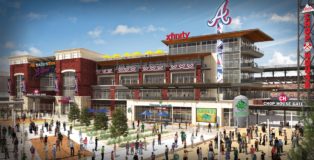 Way back on November 11, 2013, if you listened closely, you heard the collective gasp as the Atlanta Braves announced their move to a soon-to-be built stadium in Cobb County, 10 miles north of downtown. With the Atlanta Braves having spent the past fifty seasons plying their trade in basically the same spot just south of the city, reactions to the move were mixed. Loyalists grumbled, northsiders rejoiced. END_OF_DOCUMENT_TOKEN_TO_BE_REPLACED