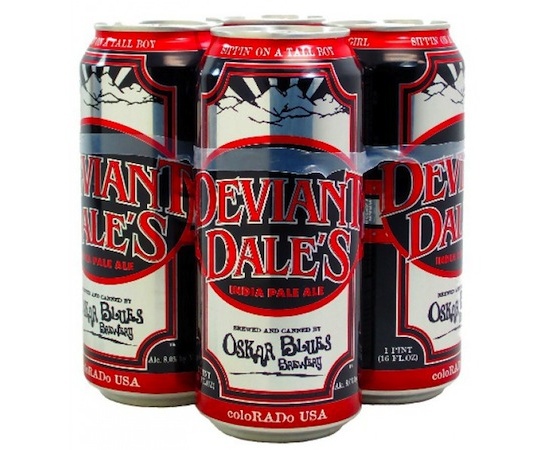 I am a lover of all things hoppy. And when it comes to pale ales, Dale’s has long been a favorite of mine. Between the incredible flavor and the whole canned-beer “gimmick,” Dale’s reminds me of true, back woods camping. And out of Oskar Blues’ strong echelon of canned beers, Dale’s has consistently topped my list.

So, when I saw that Oskar Blues had begun canning one of their tap-room-only beers, I immediately called for a stop to Argonauts (the local go-to for all things microbrewed). Before Deviant Dale’s IPA even made it to the canning process, it had already won a Silver Metal at the Great American Beer Festival; perhaps it was this intense adoration that released this Deviant ale to the public. But no matter how it came about, we can truly thank the gods for this canned monstrosity.

And a monster it is.

Immediately after flipping the top of this 16 oz. can, the smell of the hops will overpower you. If you like your IPAs hoppy, then this is your beer (“Would you like some hops with your hops, sir?”). Legend has it that the hops used in Deviant Dale’s IPA are the same ones used in Russian River’s popular (and oh-so delicious) Pliny the Elder. Whether this is true or not, these hops definitely stem from the same resiny hops.

This bold-flavored beer hits your tongue with a force to be reckoned with. Like all IPAs should be, the beer is bitter, and it is quite incredible. When the hoppiness leaves your pallet, the maltiness of the aftertaste moves in. The more you drink, the more you realize how truly wonderfully Deviant it is.

And thus, I leave you with this metaphor: Dale’s Pale Ale is the Bruce Banner of Oskar Blues beers. Dressed in a modest 8 oz. can, Banner is a mild-mannered (but brilliant) ale. His hops (though delectable) are firmly under control. But what happens when you take this small can and apply a heavy dose of flavors and hops? The Incredible Hulk. Deviant Dale’s IPA is the bigger, better, and badder Pale Ale. Its hops are uncontrolled, and its flavor runs rampant. If left unchecked, one could truly find themselves buried in these 16 oz. cans, allowing their own “Hulk” to roam free. But much like Banner’s “other self,” Deviant Dale’s IPA is the can inside us all, waiting to be opened.