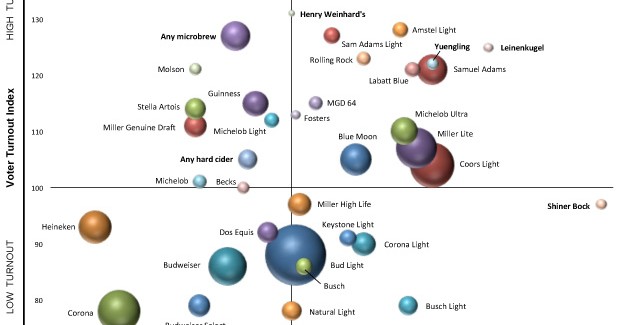 Election season is over on Tuesday so celebrate the end of political ads with an Ultimate 6er. According to some recent research, certain beers are correlated with political persuasion and also the likelihood of voting. Interestingly, people who drink “any microbrew,” lean to the left and are very likely to vote. So I suppose if you’re reading this blog, you’re statistically more likely to be a democrat who votes a lot.

Beer 2: Sierra Nevada’s Celebration Ale. Sierra drinkers turn out to vote in the highest numbers by far. Here’s to hoping your Celebration Ale will be enjoyed while actually celebrating.

Beer 3: Lone Star. On the other end of the spectrum, Lone Star drinkers barely vote at all. That could possibly be explained by a “why bother?” attitude since Texas has about as much chance of voting blue as Gary Johnson does of winning. It could also be explained by Texas simply being batshit crazy. To the non-crazy Texan(s) out there, I apologize. To the rest, please don’t shoot me with one of your guns.

Beer 4: Dark Lord Imperial Stout, from Three Floyds Brewing. If your guy doesn’t win, crack one of these in honor of our new dark lord who will surely lead the country into a death spiral of kitten murdering and Nickelback. It’s also pretty strong, so it will be effective in the ensuing self-medication.

Beer 5: The Black Bullet, by Trafalgar Brewing. Get to know the breweries of Canada for all the folks who will make election night threats of moving north if so-and-so gets in office. If anyone actually does follow through, let them know about this strong Belgian style triple, and tell them to enjoy their free healthcare.

Beer 6: Ale to the Chief, from Avery Brewing. From our very own swing state, a presidential beer first introduced for Inauguration day 2009 and brought back this election season. Only a single batch is brewed every four years though, so good luck getting your hands on one. 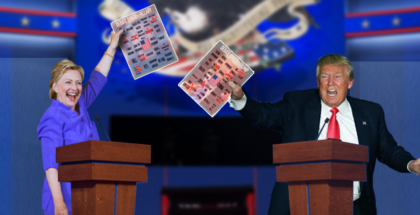