The name of this beer says it all. Imagine if Snooki and Kanye had a child together (maybe the most terrifying thing I have ever conceived…) and then Kanye left during his/her/it’s youth. What would the product be? The most menacing and arrogant adolescent ever. Double your arrogant DNA, and you get double the devil child. Stone Brewing Co. doubles their Arrogant Bastard Ale and boggles the mind with their palate smashing Double Bastard.Big malty carmel aromas clobber the olfactory senses with the epicness that is an American Gladiaor-esque jousting match. The nose takes a more epic hit than Malibu. While in a post aroma daze on the beach with a babe in one arm and a brewski in the other, the palate punishing begins. A real stampede on the tongue, the malty flavors ride shotgun to hop bitterness as big as a Southern Pacific locomotive. At a totally unmanageable 11.2% ABV and offered in a 22oz bomber, or on draft and in three liter-bottles at Stone Company Store locations, one may be drunk after writing a post of this length… like I admittedly am now. This is the Marauder of beers and should not be taken lightly. As described on its label, “This is one lacerative mother of an ale.” Nothing more can be said. Drink up. 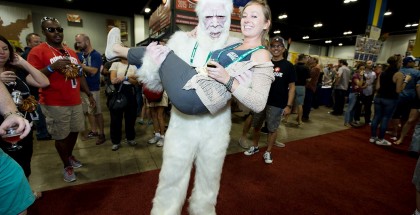