I am writing this piece at my computer during one of the rare free moments when I’m not consuming media. About four and a half years ago, while sitting in my freshman college dorm’s common area, I heard someone mention Hulu.com. Two years ago, my cousin bought me a trial of something called Netflix.

Since discovering these (and other) ways to enjoy movies and TV, they’ve become a huge part of my life.

And I’m not sure whether that’s a great thing.

Take for example a sampling of the tweets I’ve sent out over the last two years. These are real. I actually made THIS many references to Netflix on Twitter… 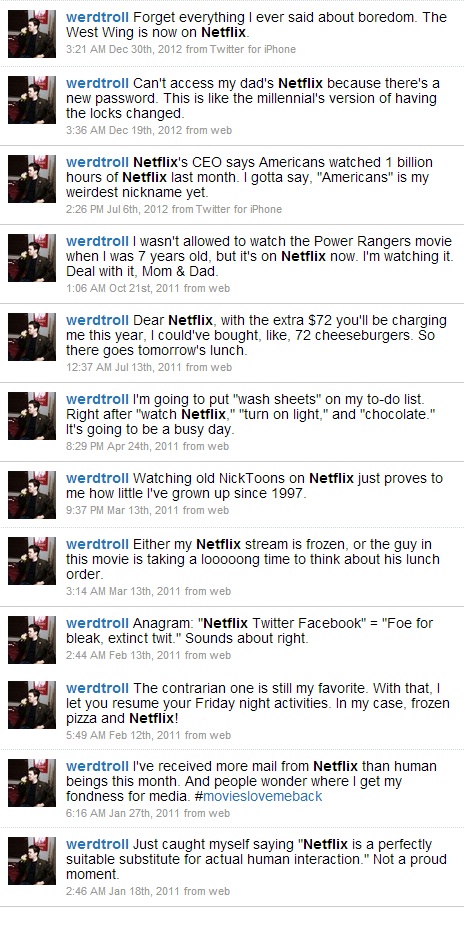 That’s to say NOTHING of all the references I make to other TV shows, movies, and videos I watch on my computer.

I don’t want to think about how many Fridays I have spent inside watching Netflix. I moved to the exciting city of Los Angeles, and I’ve probably missed out on meeting a few thousand people because I wanted to stay in and cozy up with a laptop in my bed. And it’s not even like they’re good movies and TV that I’m watching. Without viewing any of these shows on a real live TV, I watched every season of American Dad. And Walking Dead. And Workaholics. And Breaking Bad. And Freaks & Geeks. And The Office (the British one). I’ve watched most of Cheers and Frasier, relived all of Friday Night Lights, 30 Rock, Scrubs, and The West Wing. I’ve watched absolutely HORRIBLE movies, from Limitless to Centurion (it’s a movie with Michael Fassbender where he’s a soldier – and no, I don’t mean Inglourious Basterds).

And of COURSE Netflix is a wonderful technology. Whereas my parents’ house has closets full of VHS tapes, a whole world of entertainment lives on the internet where my latop can get it. (Come to think of it, I have Netflix apps installed on 5 devices in my house – my laptop, my phone, my iPod, my Kindle, and my Xbox). It’s portable, it’s convenient, it’s relatively cheap, and it provides a great way to spend a quiet evening or kill time while doing the laundry.

But it’s a bit addicting. Hulu was like my gateway drug. And Netflix is like crack for 20-somethings who don’t do hard drugs but just really like old episodes of Coach. Every once in awhile I come from work (I work for a national TV show) and burn the remaining hours before sleep watching TV, only to realize “holy crap… I have literally devoted every waking hour today to television.

There is hope for those out there who share my pain. Here are some steps to a healthy internet TV viewing lifestyle.

-Use headphones sparingly. Watching Netflix in bed before sleep is nice, but in the evening hours, plug your laptop into the TV and invite roommates or friends to watch with you. I have viewing buddies on Breaking Mad, Mad Men, and Homeland. They keep me sane.

-Binge on one show at a time. It got a little weird when I caught up on Walking Dead and Breaking Bad at the same time. I started having nightmares about zombies cooking meth. Let’s take it one addiction at a time, shall we?

-Find some balance. Read a book (not an e-Book; iPads are basically expensive Netflix machines). Listen to NPR in the car. Go for a walk.

So let’s support each other, and hang in there. Or maybe just fire up something cheesey on Netflix and enjoy the Universal Drinking Game. 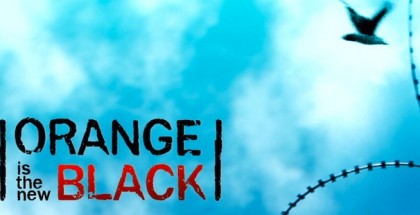 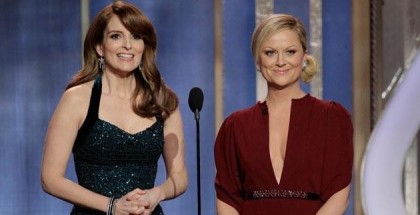 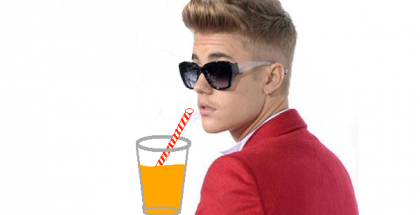