Whether you’re enjoying time off between semesters, a break from work, or stuck in the special kind of hell that is a 62º office when it’s beautiful outside, there’s no doubt the dog days are here at last. In any case, stay awhile and get acquainted with the pop culture news and previews you’ve been missing.

Don’t Call It A Comeback

If there’s anything thematic about this week, it’s that pop culture does not take getting knocked down lightly. Serenity/Firefly, Robert Downey Jr., Family Guy, The Backstreet Boys, Cougar Town, Matt LeBlanc, and Scrubs all stand tall as examples of pop culture phenomena that refused to die when told to. It’s usually been considered a rarity, but these days shows, movies, trends and artists alike get knocked down, but they get up again. You’re never gonna keep ’em down.

This week is perhaps the clearest example of what I’ll call the Chumbawamba Effect (irony notwithstanding), and first and foremost, you know as well as I what show most recently exemplified this scientific abnormality. Netflix released the entire forth season of Arrested Development last Sunday. What you may not know, or what you’ve been denying to yourself, is that the series isn’t nearly as awesome as it used to be. Maybe it’s because the characters we love hardly interact with each other. Maybe it’s because Netflix decided to leave a handful of the original writers out of a job. Maybe it’s because months of hype and its miracle renewal were just too much to cognitively handle. We at PorchDrinking.com have a recorded history of Arrested Development worshiping/hype-train-ing, so Maeby we share some blame too. Regardless, check out Drew Troller’s article dissecting the four ways fans are processing this season.

In comeback news that’s likely to get similar levels of fan blood boiling, Dan Harmon might be returning to Community! As any fan will enthusiastically spit at you, it was an absolute travesty that Community got renewed last season but Dan Harmon, the creator, got fired. After a lackluster Season Four (this is becoming a suspicious trend) and a fifth season renewal, Sony and NBC apparently realized their mistake. This week, Harmon let slip that he was negotiating to return as show runner for Season 5. If this actually works out and Harmon returns, it will truly be the best of timelines.

The roller-coaster ride of comeback news continued this week with the announcement of a Leprechaun reboot. Yes, that creepy looking VHS cover that scared you as a kid is getting remade, for God knows why. And that’s not all. The higher ups (or furthest downs) are planning on not one, but TWO Leprechaun movies, with WWE wrestler Hornswoggle set to star. This is not a joke. This is actually happening.

Of course, in typical fashion for this bizarro week, another green-clad figure from our childhood is making a similar comeback. Jason David Frank, the original Green Ranger from Mighty Morphin Power Rangers, is once again suiting up in the emerald/gold armor for Power Rangers: Megaforce, a special 20th Anniversary event show.

Nine Inch Nails, the 90’s-2000’s band from music mastermind Trent Reznor, broke up in 2009. Guess what their planning for 2013? Their ninth full length album and a comeback tour. Since the breakup, Reznor has won and Oscar for his work on The Social Network soundtrack, and when asked how the new album his coming, he said “I’m happy to say is finished frankly f—king great.”

Tired of comebacks? More tired of Pirates of the Caribbean sequels? Then I have really bad news for you… 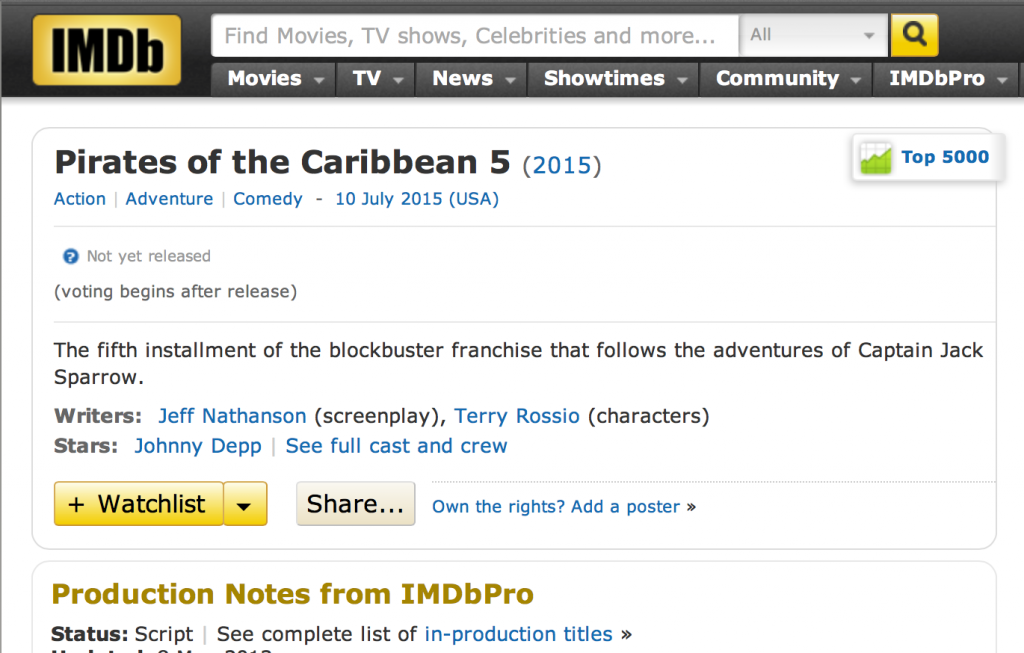 Big News For Those Who Love Superhero News

Chances are you’ve never heard of the comic book character Quicksilver or his sister Scarlet Witch, but by 2015 you will. Joss Whedon, geek God and master Avenger, is writing the speedster and his magical sister into his script for the Avengers 2. Whedon confessed that he always had an affinity for these mutant Avengers, adding that their powers will offer some visual splendor to a cast of heroes who up to this point basically just punch things.

But wait a minute. They’re mutant Avengers, and Marvel doesn’t have the rights to the X-Men. They belong to Fox.

Along with Spiderman, Fox has retained the rights to the X-Men franchise by making arguably awesome-to-decent comic book movies since the early 2000’s. Spiderman and certain X-Men appear in many Avenger comics, but because Fox owns them, they can’t legally be shown in a Marvel film. Adding to this nerdish drama, director Brian K. Vaughn tweeted this week that he just cast Quicksilver in the next X-Men movie, Days of Future Past.

What we have here isn’t a failure to communicate, but a failure to cooperate. Since the news broke, Fox and Marvel/Disney have been readying their legal arsenals for an epic battle. So far, it’s been speculated that Whedon can technically use the characters in Avengers 2 as long as he never calls them “mutants” and never references their rich X-Men history, but since X-Men: Days of Future Past will reach theaters before Avengers 2, we’re potentially going to see the same-but-modified characters simultaneously in two different movie universes.

Which will be as weird as it sounds. Many are quick to lament Fox and their unwillingness to let Marvel use all their characters in one giant superhero  movie, but I’m happy with letting Fox do their thing. On a movie-to-movie comparison, Fox produces much higher quality superhero movies than Marvel anyway (looking at you, Thor/Captain America). Only time will tell who gets to show these mutants off, but its a whole lot of trouble for some pretty forgettable characters. Quicksilver is essentially a Flash ripoff anyway. Heres hoping DC ends up getting around to that Justice League movie before jumping on the lawsuit bandwagon.

That’s all for the news of this week*, and with that, let the summer commence. Remember, when the heat and humidity get you all sloshy and swampy, check out our beer posts for the most appropriate refreshments. That’s kind of our thing.

*Surface Level Mentions: Sam Mendes is back to direct Bond 24. Tom Hardy might play Elton John in a new biopic.

**Dishonorable Mentions, aka News You Really Shouldn’t Care About: Adam Levine said “I hate this country” on The Voice. Two and a Half Men cast a ‘long lost daughter’ to replace the half-man-boy-actor.