Yesterday morning, news broke that Magic Hat Brewing Company, owned by North American Breweries, which ironically is owned by Florida Ice and Farm Co, which coincidentally isn’t based in Florida, but rather Costa Rica, was filing suit against West Sixth Brewery out of Lexington, Kentucky, which also coincidentally is my home town.  I’m biased, I know.

As we mentioned in yesterday’s post, North American Breweries recently came in at #6 nationally in beer sales by volume.  According to MSNBC, the Magic Hat Brewing Co brand alone sells 154,236 barrels a year.  West Sixth Brewery, which is just over a year old sold a little over 2,000 barrels last year. But that’s not really the point.

The point, and it’s a point I made already during Strange Brew Beer and Winemaking Supplies vs Strange Brewing Company debacle, is that craft beer is about community.  Sure this may sound like Disney Channel propaganda but it’s true.  Craft beer is about helping thy neighbor.  In my short time covering the beer industry, the biggest thematic takeaway has been that this beer renaissance would not be possible without the collaborative spirit that has propelled 409 breweries to open in 2012.  The most notable example comes from the aptly named project between Russian River Brewing of Pliny the Elder fame and Avery Brewing Company which makes fan favorites like White Rascal, the Dictator series as well as the infamous Rumpkin.  Both breweries realized that they had created beers named Salvation, but instead of settling the scores in court, they decided to jointly brew a beer titled “Collaboration Not Litigation“.

Sure there are two sides to every story, and as anonymous user “New Brand” pointed out on Pitch Engine last night, Magic Hat was a bit ambushed by West Sixth’s social media campaign, whether that was intended or not.  But first it’s important to point out that while the sub heading of that post states “Documents reveal a different story”, nowhere in that post are readers shown said documents, nor are those documents actually directly quoted. Also the point they make is that Magic Hat tried to reach an agreement for West Sixth to change it’s logo and branding before filing suit.

Here’s what we can still glean from that Pitch Post:

The biggest failure in this conflict is not just on Magic Hat for trying to destroy a small craft brewery, it’s that Magic Hat is inherently inhibiting the growth of beer as an industry.  As stated in a post by the Chicago Tribune wine and liquor have been eating away at beer’s dominance as America’s preferred alcoholic beverage. And a recent NPR report also shows that wine is making up ground accounting for 39.7% of in store liquor sales. And while beer still accounts for 50% of alcohol sales in the U.S., Americans are still discovering beer and that discovery is only being hindered by the greed, politics and competition of big brewery battles.

The reason the Lexington and Craft Beer community as whole responded to Magic Hat with such fervent virality, is because the majority of the people in the craft beer industry understand that collaboration is necessary for growth, that they should not look to their neighbors as competitors but as proponents toward fueling the craft beer movement, and that in the end, quality, passionate, great tasting beer is what will distinguish itself among the rest.

So sign the petition to give Magic Hat a wake up call, and a tip of the hat to Lexington businesses for boycotting Magic Hat. But in the end the greater message is that beer must support beer in order to keep thriving. Collaboration, not litigation. 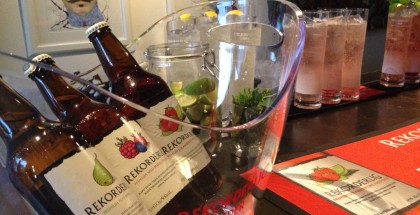