Ah, baseball is back. I love America’s pastime. From the crack of the bat to the pop of the mitt to the stoppage in play because of an official review – baseball is great. For the first time ever instant replay is being used throughout MLB stadiums and everyone has their own opinion on whether it’s good for the game. While there have to be some tweaks to the system, and players will have to change the way they play the game in some instances, I think instant replay is a great thing for baseball and will only improve.

Now, if you’re against instant replay you’re probably already listing the numerous ways which replay is awful. I understand change is hard to deal with, but in the end we want the call on the field to be correct and make sure a bad call doesn’t decide a game.

Oh, you think human error is part of the game? Sure it is – I understand that, and that’s a great argument and all, but let me ask you what you think of human error when an umpire costs your team a game that could have playoff implications. Let’s ask Armando Galarraga what he thinks of human error. If it wasn’t for human error he would have a perfect game, instead Jim Joyce’s blown call cost him his spot in baseball history.

Next you’ll probably tell me that it slows down the game. I couldn’t agree with you more. But that’s just the price you pay as you try to better the game. The average review on opening day was one minute and thirty-nine seconds. The longest review was only two and a half minutes according to DeadSpin. Guess what – that’s not that bad. Managers only get one review each in the first seven innings so on average the games are being extended by no more than five to six minutes.

But I get why you’re complaining. The system needs to be improved and I promise you it will as the season goes on and each season they will tweak it here and there to make it better. I’m for instant replay, but they could change a few things right now.

I hate that managers can come out of the dugout and stall while the guys upstairs review the play and then call down to review it or not. That’s not how this should be done. If a manager wants to review a play he needs to get out of the dugout almost instantaneously and declare he wants to challenge. If I see Rick Renteria chomping on some sunflower seeds along the third base line just standing there doing nothing I’m going to go crazy. Challenge or don’t.

Every play should be reviewable with the exception of judgment calls (in-field fly, balls, strikes etc). I hate this rule in football as well, if we have instant replay every play should be able to be reviewed. When watching a football game and the announcer says that play can’t be reviewed I almost lose it. If we’re going to spend millions of dollars to make sure we get these plays right, give the officials the option to review everything!

Another big change is how the players are going to have to adjust their game to instant replay. What do I mean by that? Let me explain.

In the first week of the season the Pirates were trying to turn a typical 4-6-3 double play. It seemed like your standard double play, but after it was over the Cubs’ manager ran out of the dugout and wanted to challenge. I couldn’t figure out why, the play seemed so innocent. I was wrong.

When the second baseman threw the ball to the shortstop covering second, the shortstop left the bag just a hair before he caught the ball. This is actually very normal when you have a runner bearing down on you – it’s called the “neighborhood play” and it’s intended to give a little bit of safety to the guy covering the bag. He can get off the bag a bit earlier and we all look the other way. That’s exactly what happened in the Cubs/Pirates game.

But Cubs manager Rick Renteria said the shortstop left early not because of the “neighborhood rule” but because the throw pulled him off the bag. Before instant replay no manager ever, and I mean ever, would have gone out to say the player left early in a bang-bang play like that. It’s such a fast play you would have just let it go – it’s a standard baseball play.

Thanks to instant replay Renteria told the umps to take a look at the throw and when slowed down it did look like it was the throw, and not the impending doom of the runner, that took the shortstop off the bag. Runner at second was deemed safe. Instant replay used in a way I never thought imaginable – but I liked it.

Unfortunately I can’t watch baseball everyday, I wish, but I’m sure other situations have occurred just like the one in the Cubs/Pirates game and more will happen over the course of the next five months of the season. So stop fighting it, lean back and enjoy the ride. Yes, baseball has changed forever, but trust me it won’t be that bad.

Mike Zoller is the Sports Director for PorchDrinking.com. He works full-time in the Northwestern University Athletic Department. Follow him on Twitter @mikezoller. 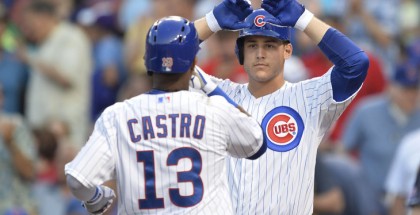