The end of May in Indiana means one thing, and one thing only, race week. People don’t understand this is not just an event, it’s the official start of summer around here. The track is open for two straight weeks so you can watch your favorite drivers practice and warm up their cars. If you’ve never been to an Indy car race it’s hard to describe. The thunder of thirty three engines all starting up at the same time and the roar of the cars passing your seats can only be described as awe inspiring. I’m by no means the biggest race fan but as an Indy native, I love watching the race live. There is something that goes beyond words about watching the speed and control of these cars flying around the oval. After 18 consecutive 500 races, I’ve learned a thing or two.

3. Always bring extra beer because you never when you might make a friend.

This year I had to turn around and go back for my butt cushion, but I didn’t forget the extra beer. Local Brewery, Flat 12 Bierwerks, just changed their standard, removing Upside Down Blonde, and replacing it with Hinchtown Hammer Down Golden Ale, named after James Hinchcliff a great Indy car racer. Spoiler alert, even with a beer named after him, Hinchcliff didn’t win this years Indy 500. Because this is supposed to be a race beer, the brought it out in bottles as well as cans, so you can bring it just about anywhere. I figured I should give the new brew a try, plus what better beer to take to the 500 race than one named after a driver.

Hinchtown Hammer Down Golden Ale was designed to be track beer. If you’ve never been to an Indy car race or a NASCAR race you know that you need a crisp flavored light bodied beer that will quench your 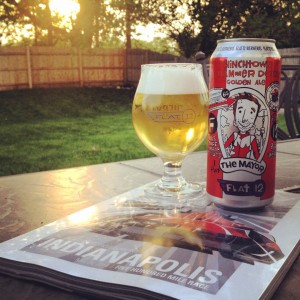 thirst in the hot summer sun, and that won’t get you sideways too quickly. It needs to be light and sessionable, but as craft beer lovers we never want to sacrifice flavor and total experience. Flat 12 did a pretty good job packing as much flavor as you can into this 5% abv beer with a nice light 27 IBUs. Hinchtown Hammer Down pours out a crystal clear straw yellow color with a thick white head. It smells sweet and grainy with hints of corn. The flavor is light and crisp with a hit of cereal sweetness. The beer has a light mouth feel and is bright and effervescent. This is probably one of the most approachable beers that I’ve had and it does a good job of maintaining a solid craft appeal. Next time you’re packing up for the big race, or just a summer afternoon of yard work check out Flat 12’s Hinchtown Hammer Down. You wont be disappointed. 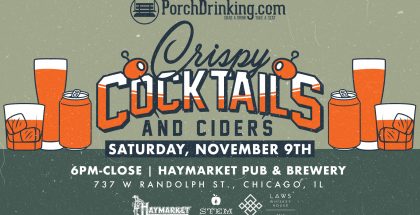