There’s big things happening this week in beer news. A few MillerCoors executives got caught embezzling millions of dollars, Govino has created a shatterproof glass, and HuffPost breaks down the cost of craft beer. These are just a few of the mind blowing topics you’ll learn about if you keep reading this edition of the Weekly Growler Fill.

4 Hands Brewing Co. which hails from my hometown of St. Louis, MO, is re-releasing its Chocolate Milk Stout. I was lucky enough to try the beer when I visited the brewery (check out my showcase here) and it is an absolute chocolate dream. Seriously, if there was every a perfect beer created for making stout floats, this would be the one. Get your hands on it if you can!

From the press release: “Head brewer Will Johnston adds two pounds of cacao nibs as well as lactose sugar to each barrel of Chocolate Milk Stout, giving the beer a rich, luxurious texture with aromas of chocolate and coffee.  The stout’s full body and complex flavor profile belies the 5.5% ABV, making for an easy and pleasant drinking experience. While the beer naturally pairs well with dessert, especially chocolate, it also offers a strong complement to hearty meat dishes like grilled beef.”

Beer world scandal! A bunch of higher-ups (allegedly) created some fake companies to bill MillerCoors and some fake companies to accept the embezzled funds. David Colletti seems to be the mastermind behind this scheme but many other employees are being investigated. Together, the criminal bunch embezzled over 10 million dollars from MillerCoors through counterfeit invoices for undelivered services. It doesn’t help Colletti’s case that he personally approved many of the invoices from these fake companies. When investigations began, Colletti took an extended medical leave. Nice move, dude.

How A Six-Pack Of Craft Beer Ends Up Costing $12

It’s pretty annoying, isn’t it? I bought four 6-packs today and my total was a whopping 50$. Although my craft beer addiction burns a hole in my wallet, I’m not blaming the breweries and you shouldn’t either. Hops and artistically designed bottles/cans do add up, but its the distributors and retailers that are making the big bucks. Read the article or check out the breakdown below. 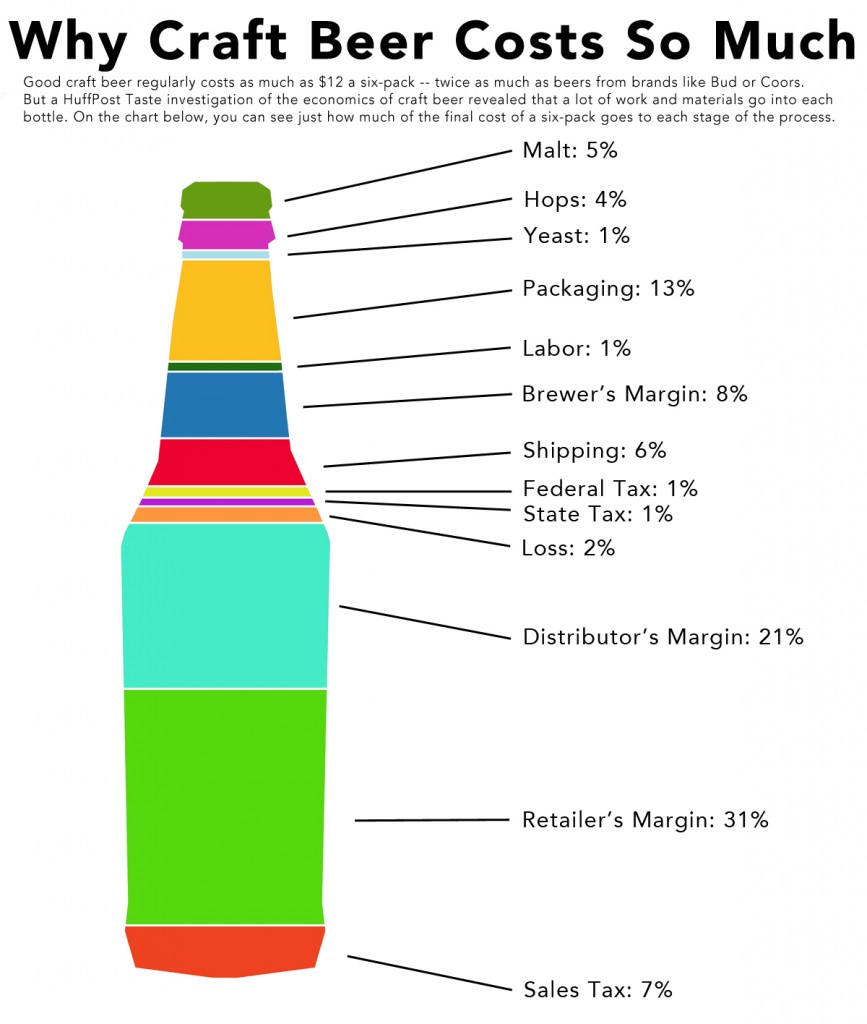 What to Expect at LA Beer Week

A few weeks ago, I told y’all about LA Beer Week and it’s almost here! This year it is being put on by the LA Brewer’s Guild and will take place September 20-28. Of course there will be the usual tap takeovers and beer dinners, but there will also be a “Meeting of the Guilds” in which the LA, San Francisco, and San Diego guilds will compete (in what way, I do not know). Beers from all around California will be welcome to the festivity, so expect to see lots of brews from Ballast Point, Stone, Eagle Rock, and El Segundo.

Govino ‘Go Anywhere’ Glass is the Newest Thing You Must Have

This funky looking glass is not only aesthetically unique, it is also shatterproof. As in it won’t break. Crazy, I know. The ‘go anywhere’ glass is made of a lightweight, shatterproof polymer meaning you can take it anywhere! If you’re interested (I’m sure you are) you can grab four for $14.95 or one for $3.50 over on govino.com.