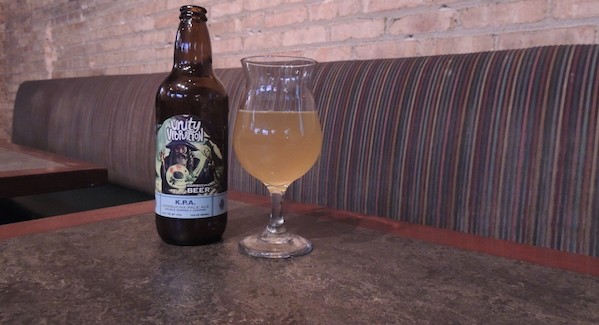 I would like to begin by saying I LOVE THIS BEER. Unity Vibration’s Kombucha Pale Ale is funky, weird, and intensely flavored. It is also organic, gluten-free, and vegan, if you’re into that. I was initially drawn to it as a fan of kombucha tea. For those unfamiliar, kombucha is tea fermented with SCOBY (Symbiotic Colony of Bacteria and Yeast) and sugar. Touted for its health benefits, kombucha tea is tart, refreshing, and fizzy. It also smells exactly like vinegar, which can be off-putting for some folks.

In order to turn this tea into beer, Unity Vibration adds three hop varietals, juniper, and grapefruit rind. It is then open-air fermented and aged in oak barrels, and finally, bottle-conditioned. This all results in a 7% ABV pale ale that tastes unlike any other beer or drink I have ever tried. The nose is still primarily vinegary, but there is a light, graham-cracker sweetness present as well. There is no discernible head, and the carbonation level is little to none. While in most beer this would be a detriment, the combination of flavors actually mimics the effect of carbonation in this wild ale. The hop bitterness and juniper are primarily evident, and the grapefruit comes through only in the finish. As the beer opens up and warms slightly, the sweetness becomes more apparent. This is a truly unique beverage that is somewhat hard to describe. I highly recommend trying it for yourself, and am always interested in hearing people’s comments on it—share them below!

Unity Vibration is based in Ypsilanti, Michigan, and makes a full line of kombucha teas, along with three other varieties of wild ales: Raspberry, Ginger, and Bourbon Peach, the last of which made Draft Magazine’s Top 25 Beers of 2013 list. The KPA is definitely the most adventurous of the series, but they are all unique and delicious. I look forward to more offerings from Unity Vibration as this small brewery continues to expand and grow.