“Insanity is doing the same thing over and over again and expecting different results.” – Albert Einstein

We can all ask Marshawn Lynch to actually give a meaningful interview to reporters. But what makes more sense is for the media to stop encouraging him by attempting to interview him. As a former sports journalist what Lynch is doing is infuriating but instead of blaming him we should just move on.

Lynch is acting like an 8-year-old child who just wants attention. As long as we keep encouraging him, this circus will continue. Once we turn our backs on Lynch and address players who want to give an insight into the game of football this will all go away.

This issue goes far beyond the Super Bowl Media Day performance of his one line “I’m here so I won’t get fined,” he’s been doing for the last few weeks. Ever since he got fined for bailing on a post-game interview Lynch has been showing up as he’s expected to and just dicking around reporters. If I was covering the team I would have been done with Lynch after his first non-interview.

The Seahawks have a wide variety of charismatic, well-spoken and intelligent players who enjoy talking to the media. Richard Sherman and Russell Wilson offer great quotes to use in a story; throw in Doug Baldwin and there is no shortage for quotable players. Why are we so fixated on Lynch?

Some are saying to fine Lynch for his “interviews.” But technically he is following the rules. He is talking to the media and I don’t think we want to go down the road of putting in the rules that the interviews have to be “meaningful.” I can’t imagine the NFLPA would be up for that change in the rules.

Let Lynch do a mock interview with Skittles, let him talk when he feels like it but let’s stop acting like we’re surprised when he gives a bad interview. Let’s stop laughing when he mocks the media and let’s move on to players who want to act like a professional…or even an adult.

There are so many better stories leading up to the Super Bowl (NO NOT DEFLATEGATE), the media should do a little digging and get a better story rather than report on the easy story handed to them on a platter that is Lynch.

Lynch is a great football player – but this issue with interviews is just stupid. 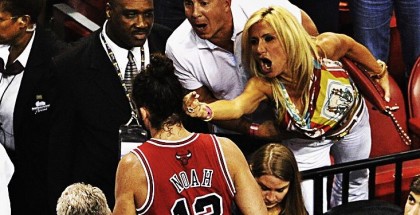