Sorry I missed our four-year anniversary. I know, I know, I’m almost a month late. I’ve been really busy lately, and I — well, of course, YOU know what busy is like. After all, you’ve got the 101! HA!

No, but seriously, I can’t believe we’ve been together for four years. When we first met, I was kind of in awe – I’d never met anyone like you. You were so different than every other city I’d ever encountered. Not to mention… do you remember how starstruck I was? I was like “OH MY GOSH! You’re that city from the movies!!!”

It’s been a few crazy years since we met. Geez, if I could go back in time, I’d look at my 21-year-old self and be like:

“Cherish this city! You’ll come to love it! Look past all the homelessness and the gaping chasm between wealthy and working class individuals! It will feel like home! Good people will come along who give a shit about you! And this city has tacos!”

Gosh, remember when I didn’t think I liked tacos? You sure showed me!

Anyway, Hollywood, we need to talk. No, not about my career. And not about my apartment – North Hollywood is a perfectly fine place to live, and it’s basically the same thing as regular Hollywood except with way fewer movie premieres and a lot more senior citizens. We’re good there. Instead, I think it’s time you and I talk about the difference between the way I thought you’d be and the way you really are.

Show me even just ONE movie or TV show from growing up that took place in LA without obligatory shots of palm trees, beaches, beautiful people wearing sunglasses, and flashy cars. That’s the image you project. That’s what you pretend to be. That’s what everyone knows you as. But c’mon. You and I both know now, Hollywood, that that’s a facade.

Palm trees? The only palm tree in my neighborhood recently had a bunch of fronds fall into the road in some windy weather and the city didn’t bother moving it for 9 days because they wanted the nearest home-owner to do it instead.

Beaches? Okay, yes, there are beaches. But the closest beach to anywhere I can afford is PACKED with tourists. And even to get there, I have to take the 170 South to Riverside, do the dog-leg job to get on the 101 South, Take the 10 West, get off at 4th… and then deal with parking. And then people there think it’s weird that I spend all day at the beach with my shirt on. Shirtlessness?! No thank you!

Beautiful people in sunglasses? First of all, the sun. I don’t see the sun. Ever. I leave for work at 5:45AM when it’s dark. I get home at 5:45PM when it’s dark. The most beautiful person I see in a given week is the check-out girl at my grocery store, and she usually walks away when I get to the counter so she can go get an employee who speaks English.

As for the flashy cars…. okay, you got me there, Hollywood. You have some pretty cool cars. My anxiety on the road is really only 49% fear of earthquake-based freeway collapse, 51% fear of sneezing and accidentally getting into a fender-bender with a Tesla, for which a fender costs several times my annual income.

I’m getting side-tracked. Point is, Hollywood, I like you. I just have to be careful, because I’ve been hurt before when I start to feel affection – remember that girl who I started dating who confessed she was really 29, not 26?!… if that isn’t some Hollywood deception, I don’t know what is.

Here’s to a few more years with you, Hollywood. Because I don’t have a 5 year plan. But between the people I’ve met through you and your growing craft beer scene, I think I could really start to fall in love with you.

PS – Speaking of expectations, we gotta do something about the Four N Twenty Diner in Van Nuys. It’s the location of JJ’s Diner on “Parks & Rec,” home of the best waffles in Pawnee. The real place doesn’t even have waffles on the menu. What the hell? 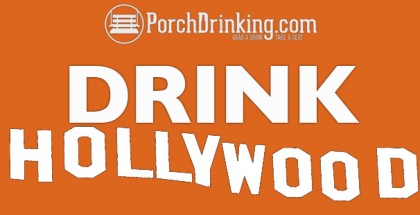