Brewery jobs are tough. I’ve been working at Oskar Blues for almost six months now and it is by far the most intense physical job I’ve ever had. Ten-hour shifts, hauling hoses, and dealing with things under extreme temperature and pressure. It’s a job that requires constant focus and dedication. Then comes the end of the day and though it might be all in my head or maybe it’s the fact that I’m dealing with beer for so long, but that first sip after my shift speaks poems.

Yesterday, I was delighted to see that we had a barrel aged Ten Fidy on tap. Straight out of Heaven Hill‘s bourbon barrels, this beast ranks up to 11% ABV with a bit of warmth on the back end but not enough to be blowing out booze. On the nose I got notes of coconut, a touch of almond and a kiss of burnt sugar. There was a toasty charred oak character, along with roasted marshmallow and a melted milk chocolate profile on the palate. Finally, the mouthfeel revealed a surprising frothiness that definitely diverted from the thick heavy oiliness that Fidy usually imparts.

All in all, this beast was quite a treat after a long day at work. Maybe I’ll have to try another tonight to make sure that I experienced everything correctly 😉

Bourbon Barrel Aged Ten Fidy (aka 10 50) from Oskar Blues. My first 32 oz crowler. Barrel provides a vanilla oakiness that blends into this rich and slightly creamy stout. A serious and possibly superior contender to the likes of Bourbon County and Parabola. Not what most people would call a summer beer but this is so good I don't give a damn. #oskarblues #stout #tenfidy #barrelaged #bourbonbarrelaged #stouts #whalez #whalezbro #craftbeer #craftbeerporn #beer #beerporn #untappd #beeradvocate #talkbeer #talkbeerdotcom #instabeer #beertography #beerstagram #beergeek #craftnotcrap #beersnob 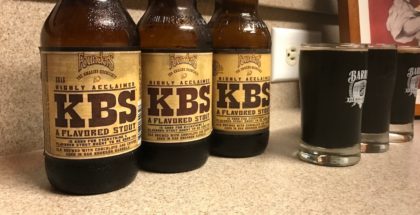