Overcast and rainy conditions failed to dampen (although they might have chilled) spirits amongst attendees at he fourth annual installment Snallygaster craft beer and food truck festival that took place September 12 just outside of the Washington National’s stadium in Navy Yard. 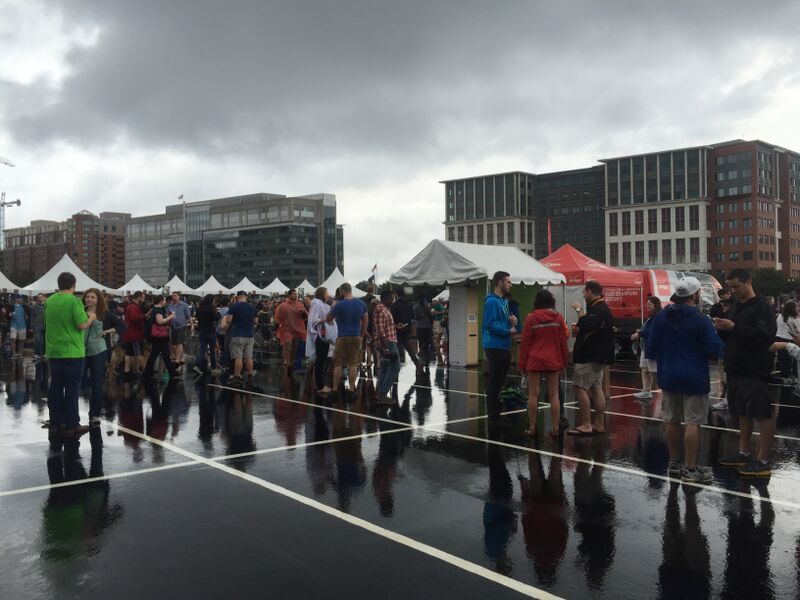 Your intrepid reporter was joined by two compadres as we braved Saturday’s off and on rainy reminders that summer is over.

And as if we needed further reminder, the festival, which featured no less than 300 beers, saw breweries furnish a host of fall-type beers. Though, with 300 beers on tap, there was certainly something for everyone.

With a press pass in hand, we walked into the festival just as one VIP festival goer was being wheeled out by the on-hand EMTs. Did he have too much to drink at 11:45 in the morning? Perhaps. I’d rather believe that this unfortunate gentleman-type was but the latest victim of the Snallygaster, the (supposedly) mythical beast that terrorized our mid-atlantic forebears whose name graces the festival.

While the specifics of our taste at Victory weren’t memorable, my compadres and I were satisfied — perhaps even if the beer we tried wasn’t memorable for being so great or so poor. I can’t help but wonder whether Victory’s aim is to brew a beer that, although tasty and very drinkable, will leave an impression like last year’s post-Christmas office party. You know — after the adults go home and the junior level types go out for “one more”. The details are hazy: you remember having a good time, but it’s sure awkward when trying to recap exactly what happened.

With our thirst not satiated, we quickly moved on to the Monocacy Brewing Company stand. With full and complete candor, dear audience, I am just returning to Washington, D.C. after several years in London and too many Saturdays gloriously spent along the Bermondsey Beer Mile. I’m definitely ahead of the curve on the local D.C. craft brewing scene, but Monocacy Brewing was a new one for me.

On suggestion of my giddy colleague and an enthusiastic volunteer, I choose the Riot Rye. The beer poured a copper brown with little to no head, the carbonation in the glass was fairly active. Malty but well-formed, I would say that the beer was a highlight. I look forward to trying many more Monoacy River beers in the near term.

After a number of beers not worth mentioning here, we braved the rain and re-upped our Snallybucks, with $25 investments apiece. The festival is really well run, and it serves as an important fundraiser for local non-profits — this year’s donations are going to Arcadia Food, which  is working to create a more equitable and sustainable local food system in the Washington, D.C. area — but costs were perhaps a bit prohibitive. 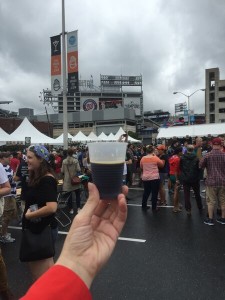 There are a variety of ways that Snallygaster can work to ensure that its bottomline is met, donations are sizable, and that guests can have the opportunity to try a host of niche beers. For instance, I would be satisfied if tasting were offered in the size and at the cost of a beer flight.

While standing in line, a jovial fellow line stander offered us his glass of the Bruery’s Grey Monday. Normally, I don’t take drinks from strangers. But we’re at a beer festival and everyone’s so nice! We’re practically BFF by the time we got to the front of the line, so what the heck.

The American Double/Imperial Stout features an ABV at just under 20%, and is a huge — though not overpowering — beer. Even with the glass half-empty (or half-full?), the nose of the beer was distinguishable. Sweet notes and the alcohol were certainly prevalent — how can they not(?) — but they were well masked. There’s a distinct hazelnut flavor that I noticed even with my uninformed palate, which i enjoyed. I plan to seek out this beer on my own time.

We had a variety of other beers, some of which were not particularly memorable. Others, like the Bear Republic’s Pinot Kolsch, whose beer/wine notes would entice both beer and wine drinkers alike, was interesting and I enjoyed this beer, although my colleagues did not.

The Beer Dunce Award — given out of love — goes to Founder’s Brewing Company out of Grand Rapids, Michigan. As a side note, I love their All Day IPA. When living abroad I would go to great lengths (and distances) to procure myself a six-pack; I even maintained a strategic reserve of All Days.

Someone gave them the idea to mature their All Day IPA in casks that formerly matured hot sauce. I know what you’re thinking: “I enjoy hot sauce, I enjoy beer, this sounds AMAZING!”

Well, that’s what I thought. The hot sauce overpowered and did not compliment, in any way, the beer complexion. Standing in line, more than a few individuals who have been served tried to friendly warn me and everyone else in line off this drink. But I was too intrigued, and so were others. I struggled, but managed to finish this beer wanting to give it every chance to improve.

Whether the presence of this beer at Snallygaster was an attempt by Founders to simply offload this failed experiment I don’t know. This beer should not be sold anywhere.

Despite the prohibitive costs, Snallygaster is one that I look forward to attending again next year.