A link to the latest post from today (Wednesday) 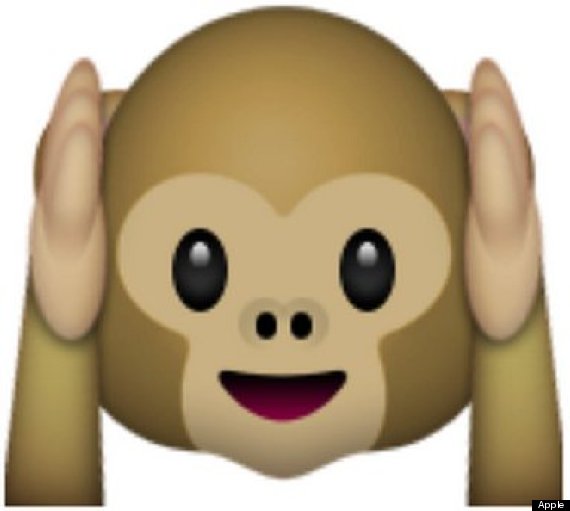 It has awakened. The premiere of Star Wars: The Force Awakens was last night in Hollywood. They shut down a half-mile of street here in LA. They premiered it on 3 different screens on Hollywood Boulevard.

Though commoners like you & me won’t get to see it for a few more days, it’s officially rolling out. Beware spoilers, folks.

A few non-spoiler-y and short-form reviews, with my own reaction to those reviews:

STAR WARS: THE FORCE AWAKENS is a strong, promising kickoff. As a standalone, I'd rank it #3 in the series.

Hey, not bad! That means The Force Awakens is better than all the prequels and a third of the original trilogy.

I got chills. I got goosebumps. I laughed. I teared up. #TheForceAwakens

Yes. This is exactly how I want Star Wars to make me feel. Although, Chris Taylor could also be referring to the flu here.

I have some more complicated thoughts on TFA, but will save them for the review. Some faults, but no doubt best Star Wars film since '83.

Hmmmm, some faults? Well, sure, I guess every movie has faults. I can forgive some faults.

Yes, Patton. We know that JJ did this movie. Although George Lucas was at the premiere, which was sort of weird. That’s like going to the baptism for the kid your ex just had with their new spouse.

This isn’t a new interview, but it’s new to me. And this one part nearly got me choked up. During a big Q&A with AOL, JJ Abrams stopped the moderator’s flow to call on a young man who had a question to ask. And it was really sweet.

I love the way JJ treats this kid with such sensitivity and maturity at the same time. And it’s such an interesting approach to asking the good old “why is Star Wars special?” question I discussed here last week. It’s great to hear JJ talk about how Star Wars shaped his moral approach to this galaxy. And how crazy that kids are now cosplaying JJ Abrams?

Another reminder that PorchDrinking.com has a deep bench of Star Wars fans. Jess has another post you should check out if you like Star Wars and incidentally stumbled upon a beer site, or vice versa.

I’m a big fan of SNL, and lately their pre-taped bits have been very well done. Expect a couple Star Wars jokes on the show next week when Tina Fey & Amy Poehler (whose movie opens the same day as The Force Awakens) co-host.

This week, they got in a pretty solid joke about Star Wars fans.

By the way, tune in the rest of the week.. take it from this grown-ass man who loves Star Wars merch, I have a few ideas of what you can get the Star Wars fan on your Christmas list.

EXCLUSIVE!!!!!!! Huge leak here. I have attained the audience satisfaction survey that Disney handed out to preview audiences at special screenings of The Force Awakens. This says a lot about our new Star Wars film, and maybe about Disney’s corporate structure. 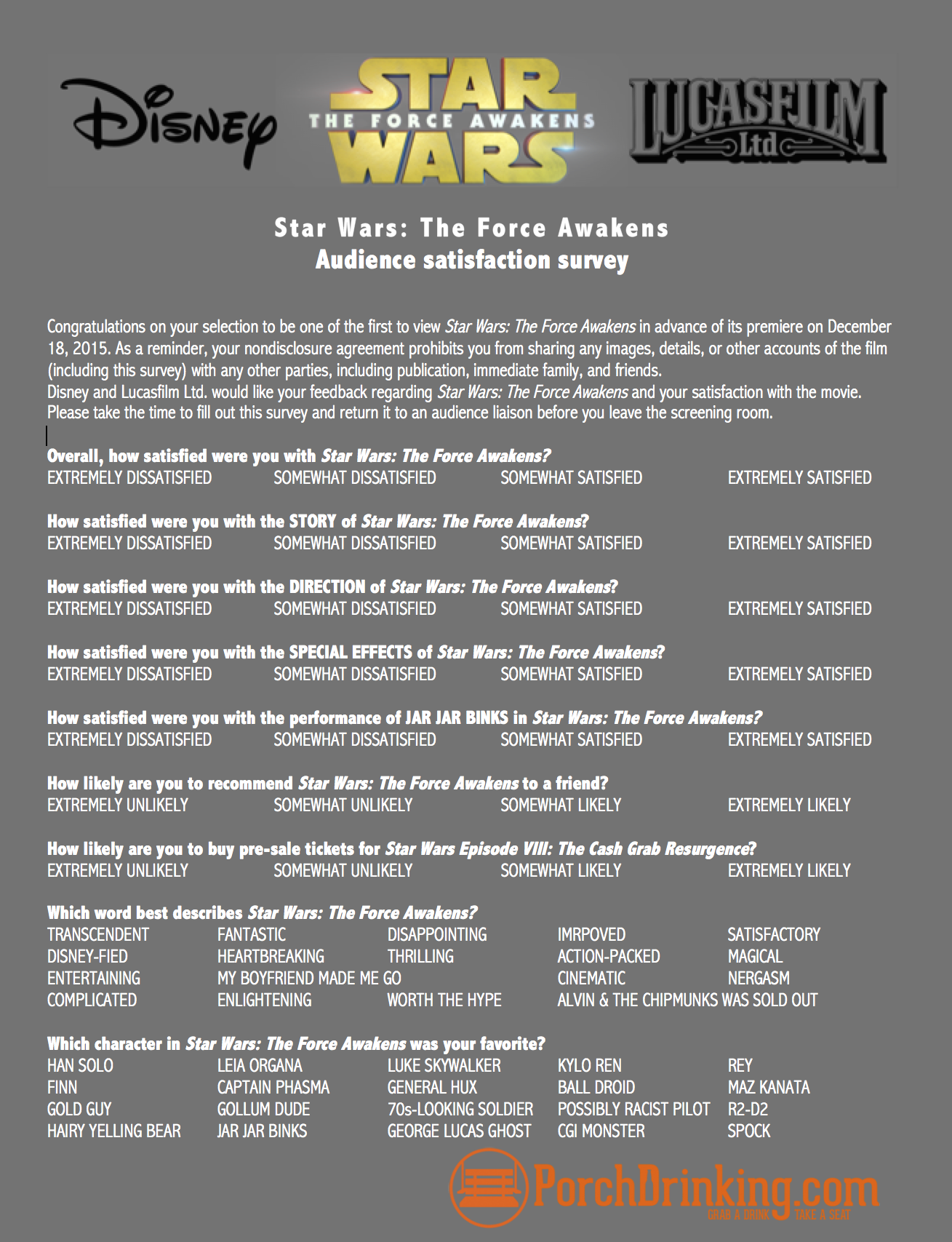 So, y’know how I’ve been blowing up PorchDrinking.com and my own social media with Star Wars posts for the past two months?

Thanks, Dad, for sharing this link. A very Nate-Silver-y approach to the questions of hype, expectation, and redeeming the legacy of the Star Wars franchise after the prequel installments. Walt Hickey, contributor at Silver’s 538 blog, breaks down the averages to determine how good The Force Awakens would have to be in order to make it up to fans:

So the benchmarks are set – 79% or better, and we’ve improved Star Wars overall. 90% or better, and JJ Abrams will have been better than the average original trilogy Star Wars movie. But I’m a Star Ways fanboy, and even a mediocre movie that takes place in a galaxy far, far away is something to be hyped about.

Most late-night hosts have their modus operandi. Or, put more nicely, there are some recurring bits that tend to go viral. Kimmel has mean tweets and the theft of kids’ candy. Fallon has his games and a capella singing bits. The latest is an acapella Star Wars medley involving pretty much the entire cast of The Force Awakens.

I like to imagine that Harrison Ford looked at a producer and said, “I’ll give you one ‘bum-bum-bum’ and nothing more.”

Honest to God, I thought this was going to link to a FunnyOrDie video. Bill Hader (that guy from SNL) and Ben Schwartz (that guy from Parks & Rec) did the voice of BB-8 in The Force Awakens. Seriously. 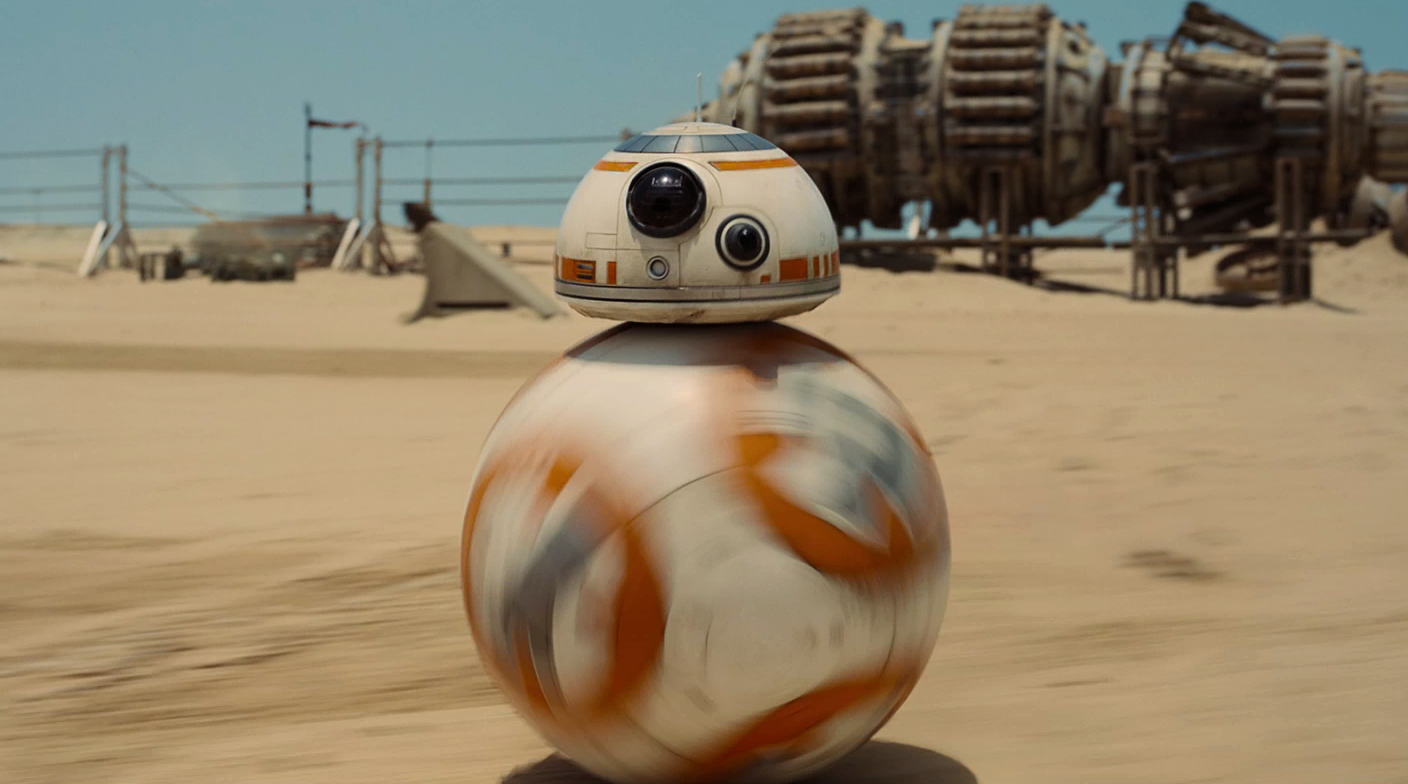 No, really. They did. 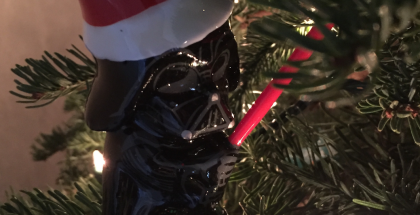 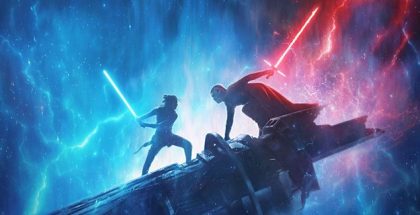