Few beer events can simultaneously appease both beer geeks and beer novices, but Plainfield, Illinois’ Nevin’s Brewing Company 21 Beer Salute did just that. As part of Chicago Craft Beer Week (CCBW), Brewmaster Marc Wilson provided guests with an onslaught of delicious brews worthy of serving year-round, but also innovative and intriguing enough to appeal to even the fussiest of beer aficionados. Also, enjoying a dark pretzel the size of Bavaria enhanced the experience – it was salty, dough-y, mustard-y and tasty!

The dual success of the 21 beer salute speaks to Wilson’s deft ability to brew in a non-traditional brewing environment. Make no mistake, Nevin’s Brewing Company is certainly a craft brewery, and it has its dedicated beer-geek fans, but many of the patrons visiting Nevin’s are there for the music, the scene, the wall-to-wall televisions, and the food rather than Wilson’s brewing prowess. In short, Wilson has had to learn how to appeal to a diverse audience or one that’s new to craft brewing. The event proved that Nevin’s Brewing exists as a great venue for which one can move from beer drinker to craft beer connoisseur.

The first beer of the 21 beer salute arrived in the form of a Firkin Mango IPA that made me want to reach over, tuck the firkin-keg in my arms and run home with it. The 12 lbs of mango used in the firkin IPA provided a mango taste that slowly built with each sip. Terrific balance, not overly sweet, and incredibly easy-drinking. It was, well, firkin amazing.

The rest of the beer arrived in thematic flights – 4oz tasters for $1 each.

First to arrive was the SMASH (Single Malt and Single Hop) flight that, when enjoyed side-by-side, was nothing short of enlightening, not to mention delicious. My favorite involved the Vienna and Munich SMASH brews. Both were comprised of identical yeast and Bavarian hops, but the differences in malt allowed for two unique results. The Munich appeared much darker and included a few toasted notes while the bright-yellow Vienna was lighter, sweeter, and provided a thicker mouthfeel.

Following the first flight, beer drinkers were given a flight of sours, followed by coffee-infusion flight – part of a collaboration with nearby Ten Drops coffeehouse, and then a fruit-forward flight. In both the strawberry and watermelon beer, bits of fruit remained in the beer, which only added to the freshness. The only thing missing was a hammock. All three flights crossed standard beer category lines and showcased innovation and experimentation, but nothing compared to the final flight that involved everything from coconut barrel-aging to Oreo cookies. The totality of the experience proved to be incredibly fun, educational, and most importantly — damn good. I say this without hesitation; the overall beer-mega-flight experience deserves an A+.

When the event started, Nevin’s Brewing Company was a little empty, but by the time I left, the place was packed. By then, Keith Semple (from “The Voice”) and his band had started playing to the thirsty and hungry onlookers. There’s a good chance many of those patrons never tasted Wilson’s creations, and that is sad. For myself, and many of my new friends I made at the bar that night, we were privy to the brilliance of a brewmaster on a night when he was able to have a little fun.

If you find yourself on Route 59, just south of Naperville, Aurora, and the Fox Valley mega-shopping region – go to Nevin’s Brewing Company. The food is great. The atmosphere is fantastic. The place is outstanding. But, it the beer is craft…and it’s spectacular. 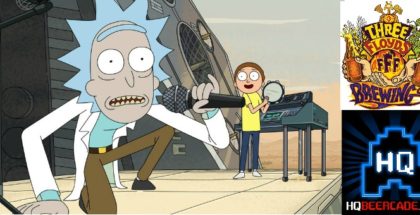