To gourd or not to gourd. That is what pumpkin ales and lagers have come down to. With how much controversy pumpkins bring to the table, I fear pumpkin pies are next! Wanting to be civil about this, PorchDrinking.com sat down two of our writers to …express what side of the pie they prefer. It’s Danele Bova vs. Mathew Powers in this no holds barred Gourd Match. No rules. No tricks or treats. The gloves are off and it’s time to carve out a solution to the pumpkin-beer debate. Who do you support? What pumpkin party will get your vote?

Nothing speaks to American craft beer better than pumpkin ales. Craft beer is a testament to innovation and renowned for utilizing fresh ingredients and capitalizing on seasonal harvests – be it wet hopped beers in the fall or farmhouse saisons in the spring and summer. The fall harvest is ripe with squash, including pumpkins, a vegetable once regarded by early Americans as a food grown during hard times. The pumpkin came to symbolize the hard-working American farmer struggling to make it as a free person on free land, but persevere they did. Over time, like many “peasant foods,” pumpkins represented American freedom so much that it became celebrated, notably as Americans moved to cities and looked to reclaim its identity, even becoming a big part of Thanksgiving holidays.

To wit: To hate pumpkin beer is to hate craft beer. It is to hate American craft beer. I dare say, if anyone is against pumpkin beer, like a so-called craft-beer lover that’s co-authoring this paper,  it’s likely they are a British sympathizer, put Fathead Benedict Arnolds on their walls and routinely lie about cherry trees they cut down.

First off, I could go on a tangent about the first “Americans” and explain how they were anything but American in more ways than one. They hardly lived up to the highest standards we hold ourselves to today. However, I will save that for another time. Yes, I will admit it. I do not like pumpkin spiced beverages. How does that make me un-American? Nothing is more unappealing than the grainy, spicy, artificial flavoring dumped into a perfectly good cup of joe.

Why would anyone ruin a delicious, roasty, beverage in such a blatantly disrespectful manner? If you want to taste pumpkin spice, bake a fucking pie! No thing is more American than pie! That’s where pumpkin spice belongs, in a pie with crust and actual pumpkin. Not in my coffee, and certainly not in my beer.

Listen, I get it. T’is the season for all things pumpkin. But every year, the season begins earlier and earlier in regards to pumpkin beers. Why would anyone in their right mind set out during the hottest month of the year in search of a beer that epitomizes all things cold weather? Plus, if you plan to buy pumpkin beer in July, you would be awfully hot in your leggings and ugg boots.

I am not so simple minded that I need to let outside variables affect my beer drinking habit. If I want a Schlafly Pumpkin or Dogfish Punkin’ in August – I’m good. I don’t care what time of year it is. Besides, fall arrives at different times in different places. I don’t care that it’s still hot south of the Mason Dixon line. It snowed in Idaho, Montana, Wyoming, and on people visiting Yellowstone National Park on July 10th-11th of this year.  I’m not asking brewers to try to solve the jet stream.

Besides, I drink stout in the summer, too. Are we going to debate that a thick stout is not allowed in summer? Beer is good because beer is good. I am not that mean. Brewers are nice people. They can only make the beer when it’s time to make the beer.

In general, stouts and other dark beers are generic styles that do not embody a specific season. I would gladly drink a stout or porter in the middle of summer. Westbrook Brewing Co. Mexican Cake is a delicious spiced chocolate stout that is released in May, as the weather begins to warm up. However, Mexican Cake’s flavors have no real connection with any given season. Pumpkin beer is clearly seasonal. So there is absolutely no reason for brewers to release this beer in the middle of summer. The only reason brewers began doing this is to beat the competition.

Fine, okay. Yes, it often appears on shelves in late summer, and yes many brewers choose to use pumpkin flavorings rather than actual pumpkin or pumpkin puree. As well, the variety of pumpkin beer is certainly grown to a point that it’s almost hard to wrap one’s mind around it. But, this debate is not about when pumpkin beer appears anymore than when Christmas Ales arrive or plethora of other seasonal items – beer or otherwise. And, I concur that winter coats arriving in stores in July, Christmas trees in August, and pumpkin beer in July are all a bit much, but that will not deter me from enjoying the beer. None of those variables affect the beer. When I drink beer, I focus on the beer.

Many pumpkin ales aren’t brewed with actual pumpkin. The lack of pumpkin in a pumpkin ale completely defeats the purpose, in my opinion. However, lack of pumpkin isn’t even the real problem here. The real problem is the offensive amount of spices added to pumpkin ales that make them unpalatable. Once upon a time, pumpkin ales focused on balanced, real pumpkin flavor with just a dash of cinnamon, clove, and nutmeg to give a hint of that classic fall flavor. But now that everyone and their mother are making pumpkin ales, the amount of “pumpkin spice flavor” has been amped up exponentially, essentially creating a spice cabinet beer rather than a pumpkin beer.

Remember a time when IPAs were well balanced with malt and hop characteristics? Then, brewers had a pissing contest to see how many IBUs they could rack up. Look where that got us.

To make matters worse, Pumpkin ales are becoming so passe that brewers are finding ways to make them more interesting by creating barrel-aged pumpkin beers, chile-pumpkin beers, chocolate-pumpkin beers, and expanding into other gourds as well such as Saucony Creek Brewing’s Captain Pumpkin’s Maple Mistress Imperial Pumpkin Ale brewed with butternut squash and maple syrup. Everyone is chasing the golden unicorn, and brewers are trying to be radically different from each other. I am over it. Goodbye with your coffee maple pumpkin overspiced bullshit!

I am glad that brewers have taken to expanding the pumpkin genre with a harvest’s worth of choices. Nothing embodies craft beer more than experimentation, innovation, and — choice. I don’t enjoy every stout, every rye beer, every Oktoberfest, every pale ale, or every Saison. I will not hate on an entire genre of beer because I don’t like all of them. I judge pumpkin beer the  way I judge every other style – one by one. Choice is good! Gone are the days of piss-yellow beer and an utter lack of variety. I am glad that an IPA can be red, black, rye, English, American, tea-infused- coffee-infused, single-hopped, dry-hopped, mango infused, sessionable, double, tripled and so-on. And, I’m glad pumpkin beer shows up on shelves in countless variety. All beer styles enjoy remarkable variability and allow for brewing ingenuity, which personifies craft beer.

Even though IPAs are also “passe,” Stone Brewing continues to succeed. I guess they won the pissing match.

Pumpkin “spice” ale is a trend. Thankfully, this trend is slowly dying and one day will be part of our distant memory. Pumpkin ales are now sitting on retailers’ shelves far beyond the season, sometimes well into the next year. The decline in sales across the country can attest to the fall of pumpkin beer popularity. A recent article from Forbes tells the depressing tale of why brewers made major cutbacks on pumpkin ale production this year due to falling sales of this seasonal “favorite.”

I also am not concerned about a cut-back in pumpkin ales being made. I do not drink beer because it is popular or because its sales are exceedingly successful. Several beer styles endure the ebb and flow that is the fickle American taste buds. Fads are fads.  It is easy to cloud this debate with ancillary items surrounding pumpkin ales, rather than discuss the beer, itself. To worry about matters that have nothing to do with beer is the simpleton approach. I will not do that.

I am not one to judge others on what they choose to do with their lives. This also includes what they choose to imbibe in. I know a plethora of people who love pumpkin ale with a cinnamon sugar rim. It makes me happy that they are drinking what they enjoy and that they are drinking craft beer. This doesn’t mean I have to enjoy pumpkin ales. And I can certainly voice my opinion on the matter.

All I can say is this. I don’t drink overspiced bullshit. I drink good pumpkin beer… craft beer. 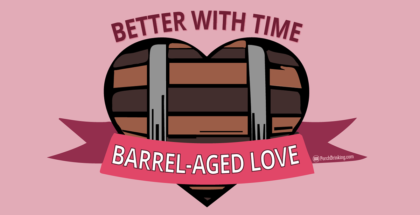 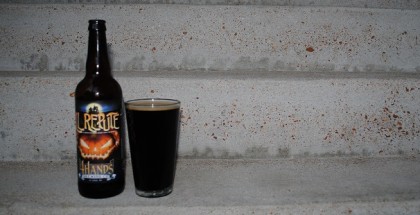