BrewDog continues to impress me with their beers. In fact, every one I’ve had thus far has been excellent even with styles I don’t normally go for, such as lagers. They also appear to be complete lunatics, which I appreciate.

Case(s) in point: A 55% ABV bottle of blonde Belgian stuffed inside a stuffed squirrel – or stoat. It’s called End of History but it should be called MADNESS. Or how about the founders changing their names to Elvis in response to the bags of hot air running The King’s estate complaining about the name of Brew Dog’s grapefruit IPA – Elvis Juice. They also opened up shop in Columbus, Ohio, which isn’t crazy – but just plain cool.

All this brings me to today’s beer, whose name would be the ultimate prize for Scrabble nerds – Restorative Beverage for Invalids & Convalescents.

These words immediately conjure images of Victorian England and weirdos selling elixirs from flimsy wagons. Which, it turns out, is not too far (well maybe pretty far) from the truth. There is a passage in a ye olde medical text written by Dr. Jonathan “Father of Pharmacology” Pereira that defines an India Pale Ale. The best parts are “…devoid of all sweetness…” and “…it contains double the usual quantity of hops. It forms, therefore, a most valuable restorative beverage for invalids and convalescents.” The fact that Brew Dog discovered this old oddness and then brewed a beer designed to fit this definition only proves my point above that they are loons. Good loons, of course.

So, how’s the beer? Excellent, as per the norm. It pours clear amber with a foamy white head. Forests of pine trees on the nose and pineapple juice with lemons upon mouth swirling. Like many double IPAs, it has that yummy resiny quality that coats the tongue in a syrupy manner, but not sweet. Just bright fresh citrus flavors with a pleasant lingering bitterness.

BrewDog co-founder James Watt is quoted as saying that drinking this beer “…is akin to injecting hops straight into your tongue with a needle…” Back in the mid 1800’s, Doc Pereira may have prescribed just such a method for restoring invalids and convalescents. And while that may be difficult to achieve in today’s more regulated medical environment, I’m not sure you can encapsulate this brew any better.

Please note that this author is a shareholder in BrewDog. (They do that in the Wall Street Journal and I’m a journalist so, same same). 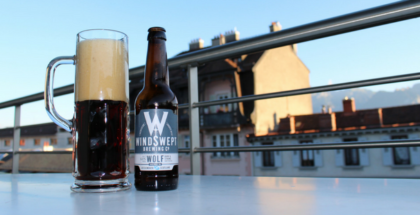