In a setting normally reserved for bringing screenplays to life, the entertainment value of Chicago’s Beer Hoptacular at Cinespace Chicago was worthy of an Oscar. Within the expansive production studio, a sea of breweries lined both walls and were accompanied by music, food, an airbrush tattoo van, and even an insult booth. Of course, a beer fest is only as good as its beer, and with more than 150 craft beers on hand, the beer selection did not disappoint.

Lou Dog Events does one job; they organize and manage beer fests. Hence, taking over Beer Hoptacular makes for a perfect marriage.

Apparently, it seems Lou Dog possesses mystical meteorological powers, too. The calendar said November, but the shining sun and 65-degree temperature allowed festival goers to venture outside and indulge in tasty treats from the many food trucks that arrived. The massive structure would have allowed all activities to take place indoors, but patrons seemed to enjoy basking in one of the season’s last warm days.

Cinespace studios happens to call Lagunitas Brewing its neighbor, which allowed Lagunitas to enjoy top billing. The moment one passed through the ticket booth, there was Lagunitas beer and live folksy music. Lagunitas and Hoptacular also collaborated on two festival-tapped firkins — “I Think I Was Rich,” IPA with Sour Cherries and “Kiwi The Writer Wants White Peppercorn So We Put In Some White Peppercorn” IPA with Orange Zest, Tangerine and White Peppercorn.” Lagunitas also enjoyed the festival’s largest pouring area, provided the most beer choices and offered a min-version of its large swag shop found next door at it massive taproom. Yet, despite Lagunitas’ strong presence, the brewery refrained from overtly dominating the fest – much to the brewery’s credit.

While Lagunitas may have been held the starring role, many well-known national breweries poured beer alongside a myriad of Chicago-area breweries, such as Bell’s, Founders, Sweetwater, Boulevard, Ballast Point and Left Hand — to name a few. No matter the size of the role any brewer played, though, it was the variety of recipes provided by the brewing-ensemble that provided for a successful Beer HopTacular festival. And don’t forget craft cideries and the nineteen competing homebrewers!

Of course, akin to a John Williams-scored movie, Beer Hoptacular also provided an exemplary musical soundtrack, which included a small marching band that paraded its way through the crowd and a terrific D.J. who spun vinyl and effortlessly intertwined an eclectic mix of multi-decade, multi-genre music, which truly enhanced the experience. The only issue with this fest, as with many large fests, is that one’s liver can’t compete with the festival’s enormity; one must make tough decisions on what beer to try and what beers to leave behind. However, If one goes in with a plan, it can provide for a wonderful tasting experience.

Under the direction of Lou Dog, Beer Hoptacular’s comeback from a one-year hiatus was a success. Will there be a sequel? My guess is yes. 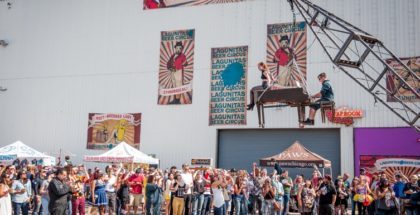