While thousands of Chicago residents and many area breweries continue to mourn and speak out against last week’s police murder of Minnesota resident George Floyd, systemic racism, and police brutality, one Chicago brewery has taken a controversial stance.

Now as protests continue to grow worldwide in reaction to the video of a Minnesota police officer suffocating Floyd at the neck for more than eight minutes. For the vast majority of breweries, bars, and industry folks, Floyd’s murder coupled with similar acts of injustice including the deaths of Ahmaud Arbery, Breonna Taylor, and countless others, have sparked social justice conversations, and activism. San Antonio brewery, Weathered Souls has even launched Black is Beautiful, a national collaboration initiative with breweries around the country to raise proceeds for local foundations that support police brutality reform.

“We are struggling to find the words to express our sadness. We are grieving the life of Mr. Floyd and so many others, and devastated by a broken system that fails to protect [people of color]. And even though the craft beer industry has its share of challenges, we are reflecting on how we can be part of the change.”

The guild continued by also asking their followers to join them in donating to a list of organizations they provided.

When asked about Steam Hollow’s post, Danielle D’Alessandro, Executive Director of the Illinois Guild, responded, “Steam Hollow is not a member and the views expressed by the owners do not reflect those of the guild.”

In the first entry, brewery owners Natalie and Blane White posting under Steam Hollow Brewing’s account recounted that they had left for a family bike ride and were unaware of any protests that had been planned. 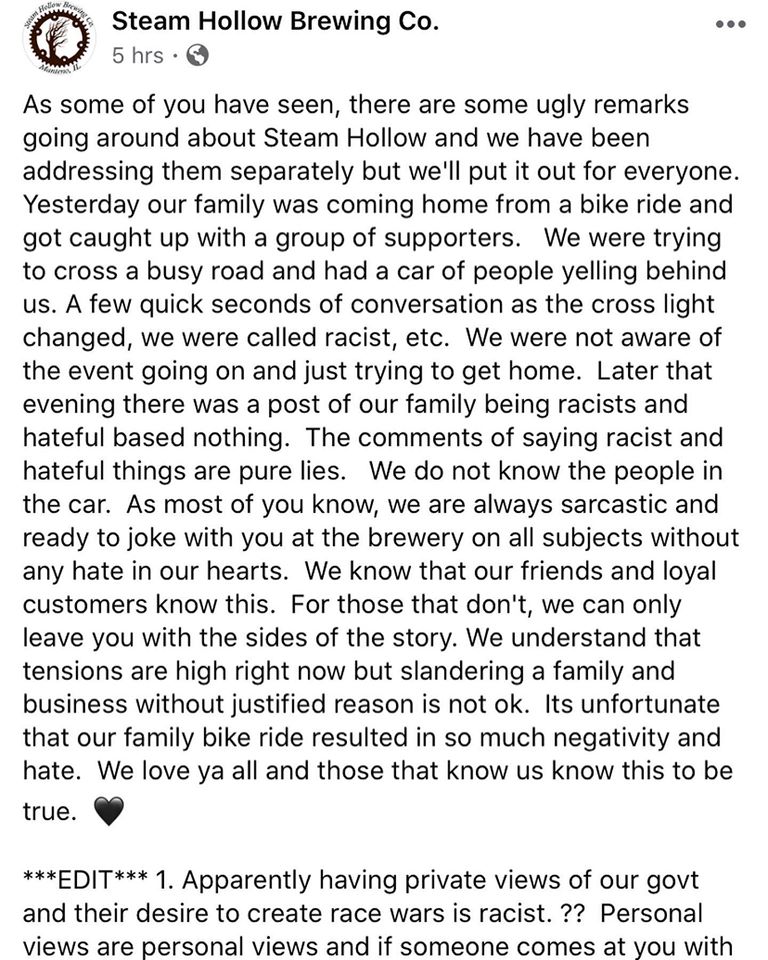 In a correspondence interview with PorchDrinking, the Whites further stated, “A car of women behind us starting throwing their protest signs up (no problem) and yelling about us being racists and raising racist kids. This whole thing took no more than 10 seconds as we wait for the light to change and on our way out we did calmly say, ‘hey, this guy might not even be dead.'”

It’s part of a conspiracy theory that seems to have surfaced last week on YouTube, notably from the channel known as JonXArmy. The 22-minute video, and resultant Facebook and Tweet shares, often with ties to the QAnon, had reached nearly 1.5 million people by Monday, according to CrowdTangle, a social media monitoring website.

However, protesters claim that the incident was instigated by the white family first. 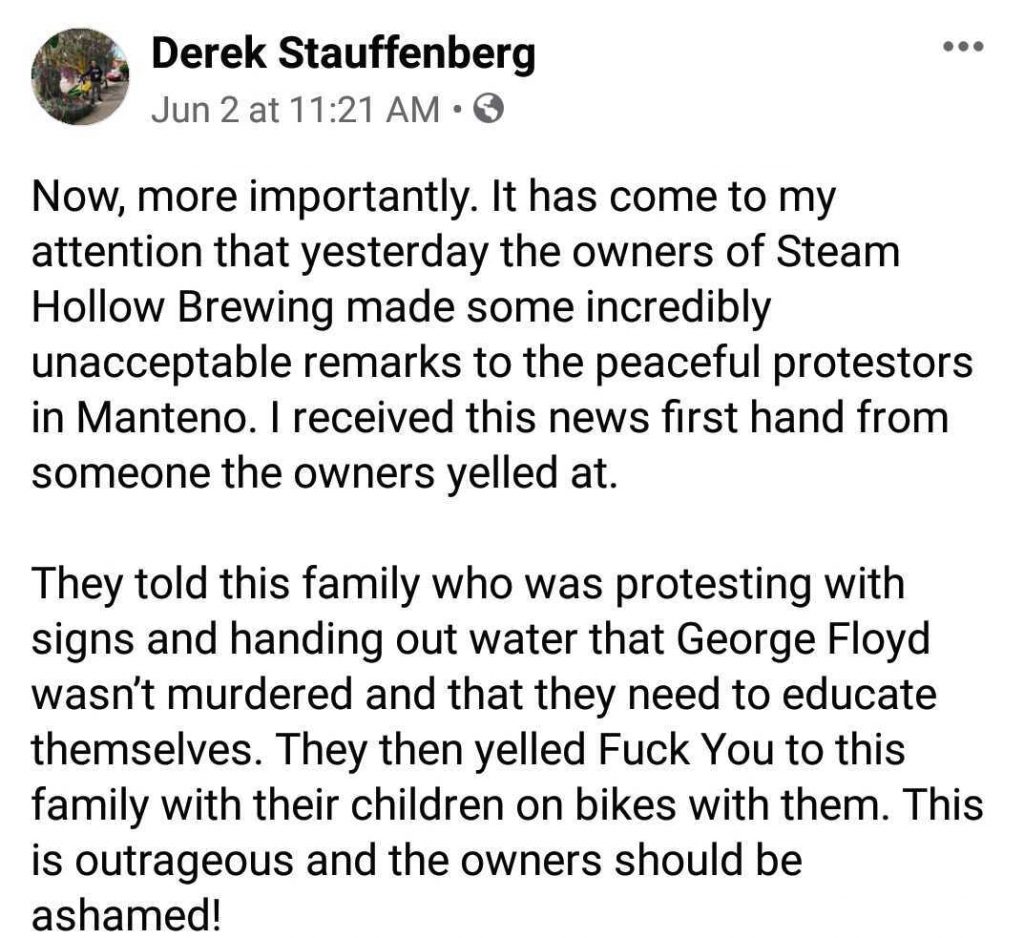 In an Interview with PorchDrinking, the Steam Hollow Brewing owners were asked whether they stood by their statement that George Floyd’s murder was fake. “We do have opinions and beliefs on the current situations at hand and our government pushing events to get the results they want,” said Natalie White. “Whether thinking George Floyd is alive or not is not racist. It’s not meant to take away from anyone’s rights to protest or demean what happened. Nor were we trying to be disrespectful. We have a right to our belief and none of which equate to being racist.”

While no one can definitely say what originally transpired on the corner, the couple said, “At the end of the day, its unfortunate that we had to be in that situation with our kids. It would have been better if we could have waited at the corner peacefully for the light to change without being yelled at. Even better if we didn’t comment out on our own views, At the end of it all, we have no hate in our hearts. Opinionated, and hold different views from some, yes, but we are for all people coming together and not being divided.”

The tone they portrayed on social media, though, led to further challenges about their views on race. 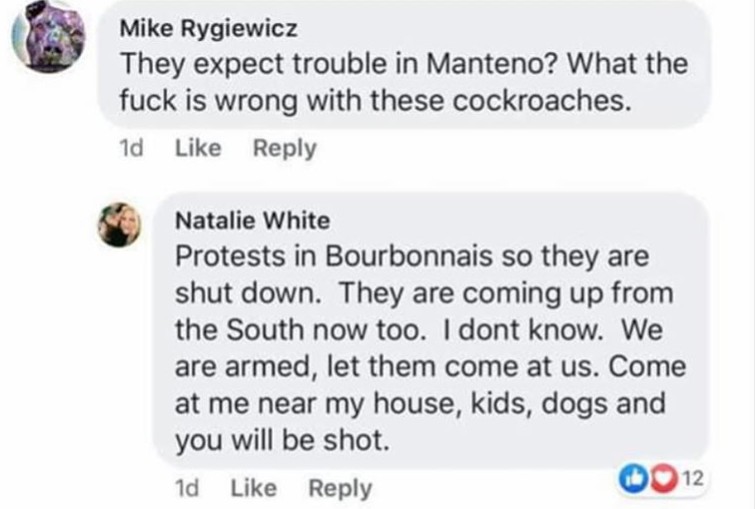 When we asked for their response to a person who used the term cockroach, the couple explained: “That wasn’t our comment and it wasn’t acknowledged or responded to by us.”

“This thread was in reference to the protests that were close to us near Tinley Park and their (sic) alleged looting in shopping centers and also reports of not peaceful protesters being bused in from the city to just south of us. Manteno businesses were closing down as a precaution to all that.”

Natalie and Blane White went on to say, “Any post regarding “shooting them” was referring to violent protesters (as it was erroneously being reported at the time) that would come into our businesses or homes. You see whats going on in the city, and then you hear that its headed toward you, your going to protect yourself,” White continued.

“Its not about race, it doesn’t matter the color of the rioter, its referring to anyone breaking the law and criminalizing your property. I do not see where cockroach was referring to African Americans in what was posted, and not understanding why that is being assumed.”

Meanwhile, The Open Bottle, a craft beer store located in Tinley Park posted on Twitter the next day, when protests remained a threat:

“Craft beer is an inclusive community, & we proudly demonstrate that in every decision we make. We want our children growing up in a world full of love, compassion, & understanding. Let’s build one together by calling out racism whenever we see it in our digital & real worlds, & start understanding that we are different but have more in common as fellow human beings.”

Steam Hollow’s attempt to clarify their positions on social media and point the finger at protesters has struck a chord with the Illinois craft beer community, including local beer journalist, Chalonda White, who is better known by her social media handle, Afro.Beer.Chick. White reflected on her interaction with the brewery when she and her husband last visited as well as her reaction to the brewery’s posts.

“I thought it was B.S. I could not believe what I had read. Nick and I went down there in October. We took pictures with these people. I didn’t get that vibe from them, so to turn around and see this and see this is how [Natalie White] feels. I mean, I can’t stand closeted racists. I would rather someone who is upfront, so then I know not to deal with you,” said White.

She added, “[They] know how social media works. Everybody knows how social media works! You make one post the way they did, and all it takes is a screenshot to circulate, I mean, they made a conscious decision to do this. So, now they want to play the victim? I’m not buying it.  That’s the problem. Most people do crap like this, and then they want to be forgiven for doing it knowing what was going to happen. So, any consequences. Any loss of business. I don’t care. I don’t feel for them.
They are canceled.”

White continued, “This [Steam Hollow incident] is definitely proof that we have a long way to go. It shows that we are nowhere near where we need to be, even in the brewing industry. It is showing you who the closeted ones are. So, Honestly. I’m glad this happened. Now we know who [Natalie White] is.”

Meanwhile, a multitude of Illinois breweries elected to take a different tone in response to last week’s events. In addition to the aforementioned comments by the Illinois Guild and Half Acre, the following posts have emerged:

“We believe in our community and our right to fight for justice. We believe that Black Lives Matter and it’s on all us of to contribute to the movement.

We will be donating to the Chicago Community Bond Fund to help. All net proceeds from the sales of beer in the taproom this week will go to the Fund.

If you would like to give directly to the Chicago Bond Fund and additional groups giving aid, or get more info, check the link in our [Instagram] bio.”

“The massive wave of protests – both here in Chicago and nationwide – have shined a light on the systematic inequalities that challenge our neighborhoods. Many of those advocating for justice and change are our friends, neighbors, and co-workers. We support their demands for lasting transformation and equality for all and will also support their efforts to heal and recover. Our strength builds when we stand together to demand the change we want in our world. ⁠
⁠
Both of our locations are closed today, and we will be keeping the brewpub on Milwaukee Ave. closed for a longer period before it can re-open fully later in the summer. ⁠”

NWBCO is proud to announce our participation in the Black is Beautiful initiative, a collaborative effort amongst the brewing community. 100% of the profits will be donated to a local foundation that supports police brutality reform.https://t.co/Y68YrJARAS#blackisbeautiful pic.twitter.com/t3BcGkSV5A 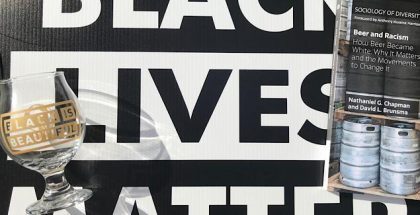