While Oktoberfest style beers and Pumpkin Ales get all the attention as summer turns to fall, true beer fans know what September brings: fresh hop season. Fresh hops or wet hops, depending on who you talk to, are only available for an extremely limited time frame and are usually brewed within a day of being picked. Their distinct flavor and unmistakable aroma are as exciting for brewers as they are for beer fans. But the story doesn’t start with the harvest—it starts years earlier under the care of hops farmers.

Montana is more known for growing malt and barley than hops. How did you get into the hop growing business?

I worked in San Diego as a mechanical engineer for a while and another engineer at the company was incredibly into craft beer. He has started a small hop yard and would sell to his local breweries; the passion with which he talked about his hobby sparked some interest in me. When I got back to Bozeman, I wanted to farm something profitable on small acreage, started researching back into hops and went from there!

What are some of the challenges growing hops in a high elevation, cold climate versus that of the Yakima Valley?

The growing season here is nearly two months shorter. Having to get into the fields fast and hard in the spring while also pushing our harvest as far into the fall as possible makes for a tricky business.  The hop plants themselves perform very well here and we have a long list of happy brewers using our product nationwide.

How many hop varieties do you grow and why did you choose those specific hops?

We primarily grow Cascade and Magnum but also produce some Chinook, Centennial, Cashmere and Galena. We chose these varieties based on brewer feedback of what they used the most as well as what we thought would grow relatively well here. When we first started, we put one acre into the ground with dozens of varieties just to test what would grow here!

Let’s talk hop terroir. Are there any distinct characteristics you’ve gotten from a hop that set it apart from its regional counterparts and make it special to your farm?

Absolutely. From my experience and now going into our sixth harvest, the flavor of an individual variety varies much more on a yearly basis then specifically on location. Our Cascades have kicked off everything from pine to strawberries, depending on the season. Our Magnum is also on a year-to-year basis far more flavorful, giving off a lot of resiny, grape and pear flavors and aroma. One brewer using our fresh Chinook even told me climbing out of the kettle after cleaning all he could smell were Fruit Loops!

Harvest season is quickly approaching and most beer lovers relate harvest to fresh/wet hop beers. From a grower’s perspective, how do you think the fresh hops alter the flavor and aroma in a beer and what’s your favorite part of that?

With fresh hop beers, you’re really getting the full expression and flavor of the cone. As a farmer, it takes an incredible amount of logistics to plan/schedule fresh hop brews. As the brewer, it’s a chance to really make a truly once-a-year seasonal and show off one’s skill. Making fresh hop beer is not easy and a good one is difficult, but delicious. I love introducing people to the style because you know that every fall, fresh hop beers are not going to stick around long.

Hop Farming Spreads Across the US March 9, 2020 | Scott Grossman 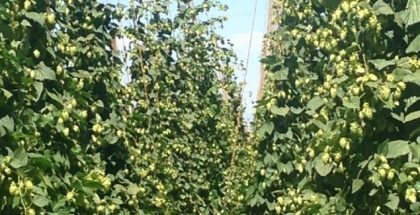