Wolves & People | The Oregon I Am (Farmhouse IPA)

A new beer from Wolves & People Farmhouse Brewery in Newberg, OR celebrates the natural beauty of the state as part of a collaboration called The Oregon I Am.

“As a native of Oregon, the natural bounty all around us informs everything we do,” said Christian DeBenedetti, founder and brewer at Wolves & People. “As a brewer interested in a hyper-local approach to making beer, Oregon offers so much in the way of things for us to seek out and experiment with.”

Wolves & People brewed a Farmhouse IPA for the project which saw seven other Oregon breweries brew their own unique beers including Ninkasi and Von Ebert. The Oregon I Am is a campaign created by the Coalition of Oregon Land Trusts (COLT) to encourage Oregonians to get out and enjoy the state’s public conservation areas (land trusts are nonprofits that work to conserve wild spaces). The release of the beers in June coincided with the launch of a new, colorfully illustrated map showing all 81 of these natural areas. Each beer’s label features artwork from the map.

“These are special places conserved by land trusts and open to the public for walking, birding, hiking, fishing and enjoying the outdoors,” said Kelley Beamer, COLT’s executive director. “As Oregonians, we love our trees, we love our deserts, we love our mountains and we love our beer. Brewers deeply understand the connection between healthy environments and the healthy water, hops and malt that make great beer.”

The brewery worked with Mecca Grade Estate Malt in Madras for the grain bill–which included Pale, Pilsner and Munich varieties–as well as two different malted wheats. Nugget hops from Crosby Hops bring around 20 IBUs of bitterness, with whirlpool additions of Crystal hops and dry-hopping additions of Cashmere and Meridian hops providing a fruity, tropical backdrop for the beer. This dovetails nicely with Funktown Pale Ale yeast from The Yeast Bay, a blend that includes a New England ale yeast more commonly found in hazy IPAs with a Belgian Saccharomyces Trois variant. Together they produce subtle fruity esters and gently spicy phenols.

The unique IPA is then subtly accented by a truly unique Oregon ingredient.

“Wild mustard grows across Oregon in May and June. It’s one of the beautiful sights of spring and early summer,” explained DeBenedetti when describing the bright gold flowers. “They’re this really beautiful, ephemeral glimpse of summer’s arrival.”

DeBenedetti had brewed with the wild mustard blossoms previously in harmony with other wildflowers but wanted to showcase the plant’s unique character in its own beer. DeBenedetti and brewer Paul Rey picked the mustard in a field just 50 yards from the brewery where they also keep bees and forage other botanicals. He said the flavor of the flowers is nothing like what people expect when they hear the word “mustard.”

“The aroma of wild mustard is incredibly sleek,” he said. “It smells like honeysuckle and plays nicely in hoppy, aromatic beers.” 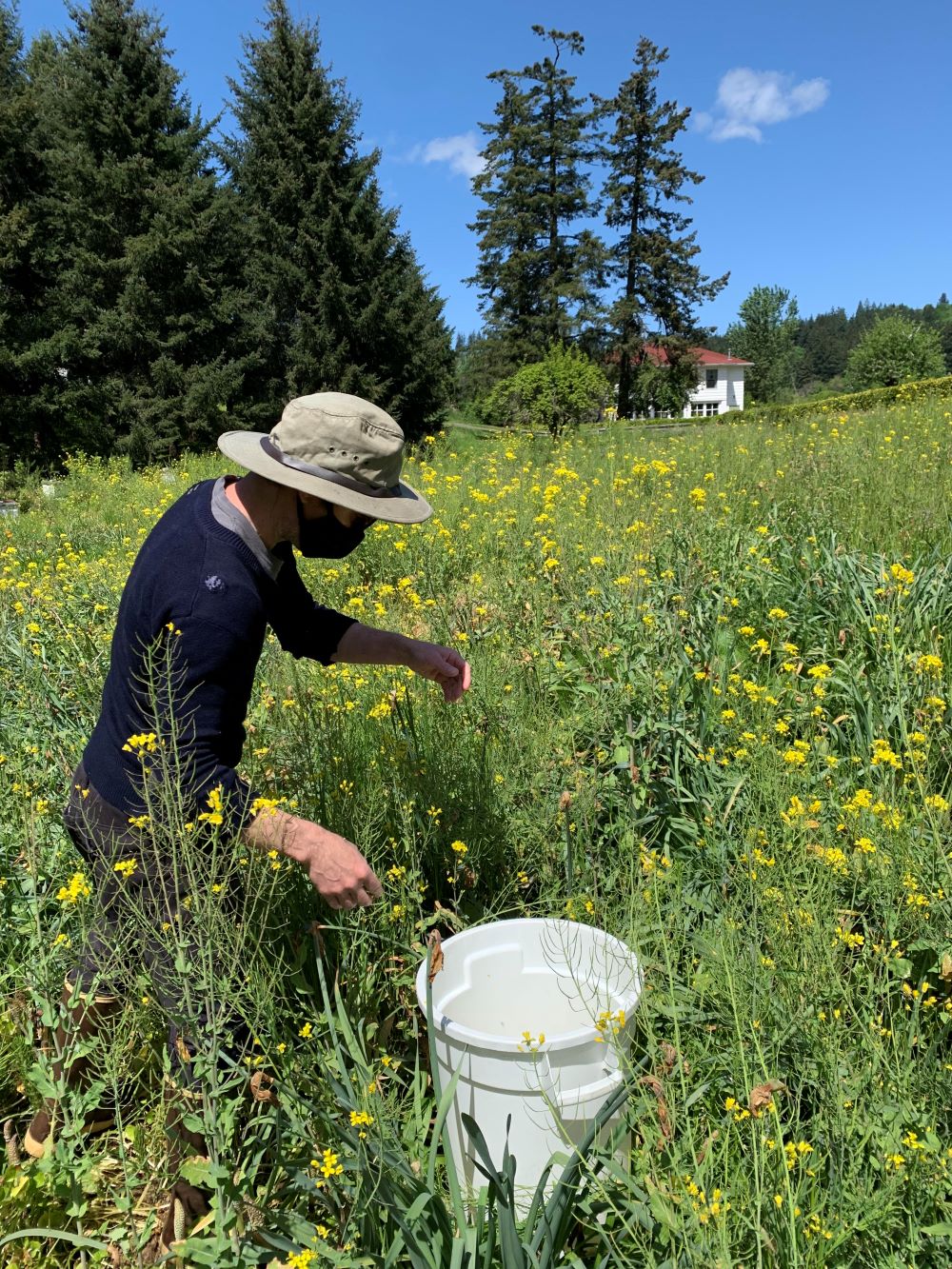 In addition to the flowers, Wolves & People also used some of the stalks from the flowers, which impart a more peppery flavor. They added the wild mustard along with the Crystal hops during the whirlpool.

“It really integrated nicely. We, as a brewery, always aim to be balanced and restrained,” DeBenedetti said. “The wild mustard doesn’t overwhelm the beer. The aroma is just a little extra floral and the mouth has that faint peppery quality.”

DeBenedetti said the beer provides the chance to tell customers about the natural landscape around the brewery, making it perfect for The Oregon I Am.

“Any local regularly coming in would have seen the wild mustard growing in our field and in the ditches along the road,” he explained. “So I can just say, ‘Remember six weeks ago when this whole area was covered in this flower? What might have looked like a weed made a beautiful addition to this beer.’ It really tied what we do as a brewery to the place we live.”

The Oregon I Am celebrates the timeless beauty of the state, and DeBenedetti feels the best way to do that is with the fleeting beauty of seasonal ingredients.

“There’s a lot of really beautiful things that are here today and gone tomorrow,” he said. “It’s really fun to time-capsule those wild ingredients into a beer and, a couple of months later, think back to those memories and places.” 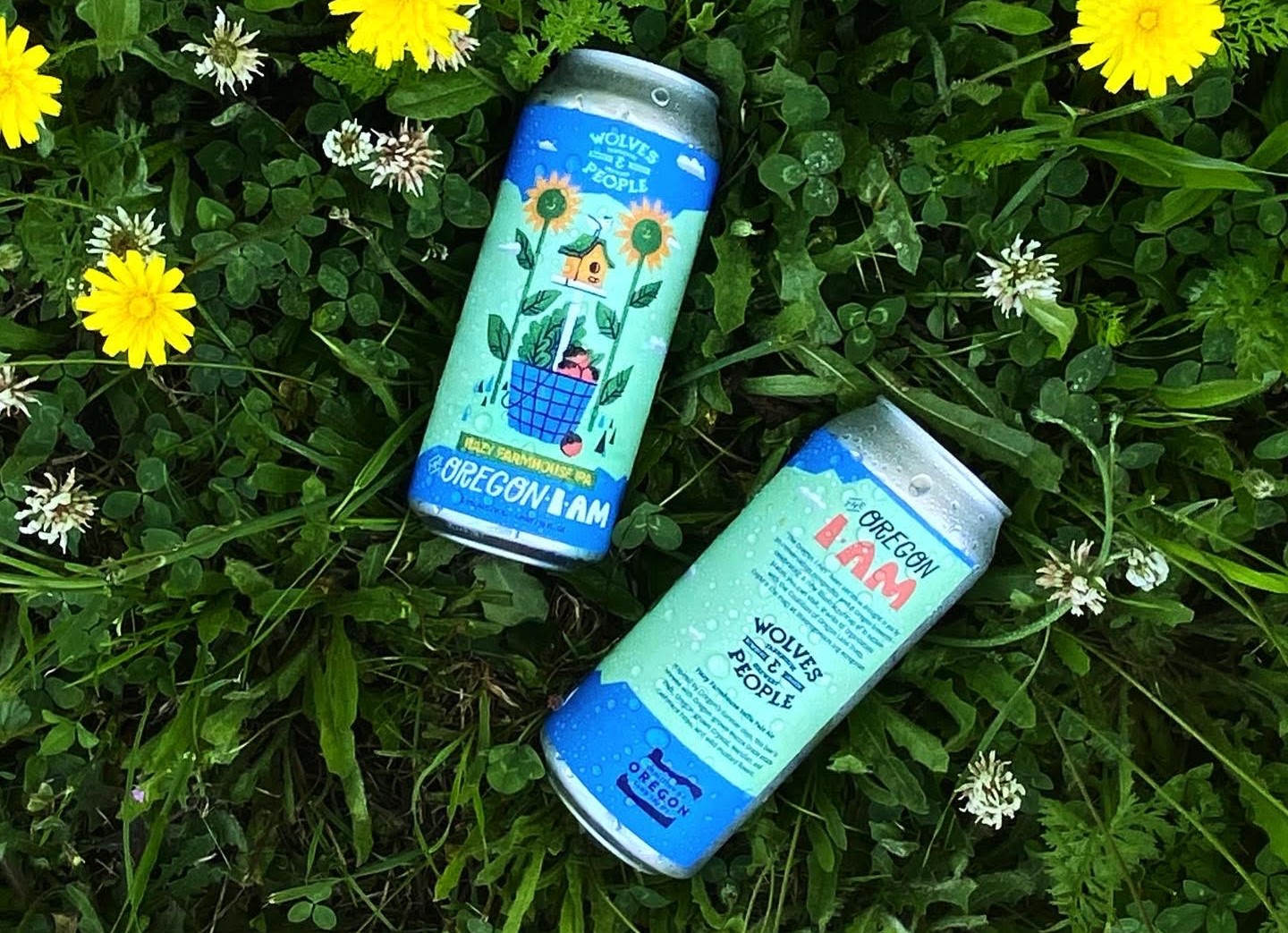 Oregon beer The Oregon I Am Wolves & People
Tweet 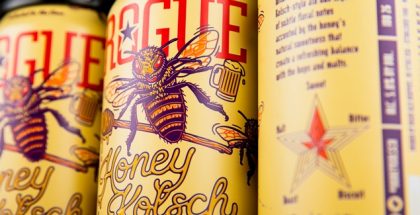